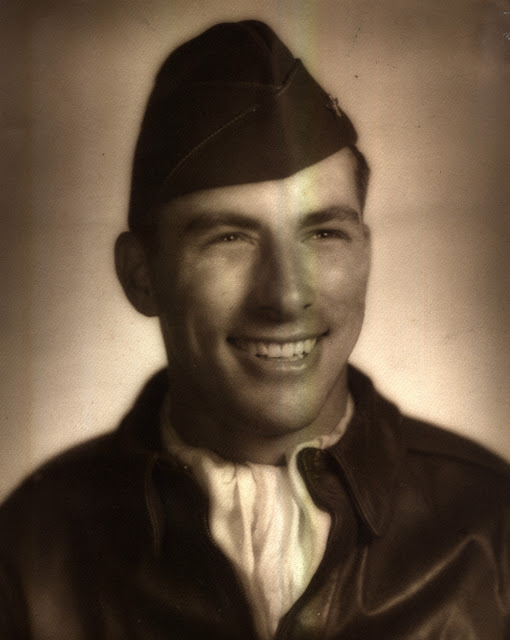 There's confusion sometimes about Veterans Day, known originally as Armistice Day, which will be observed on Saturday. Unlike Memorial Day, set aside to honor our war dead, Veterans Day is intended to recognize living veterans --- those who served, survived and then returned to civilian life as well as those still serving.

Col. Bassel Blakesmith, who died during 2003 at age 90 after a military career that spanned three wars followed by 30 years of productive "retirement," was the type of guy the day was intended to honor. So this seems like a good time to tell a little more of his story. I've written about him before, so follow this link if interested.

The term "hero" has fallen into casual use these days, broadly applied, but there certainly were and are heroes among these veterans. Most who really are would not be comfortable with the designation, nor would they tell their stories easily. That certainly was the case with "the Colonel."

We know one of Blakesmith's stories in large part only because Russell "Rusty" Annabel, then working as a United Press International correspondent in Alaska, happened to encounter him during 1944 and share the story of his part in the rescue of a downed Russian airman in a dispatch published widely in the United States during early September of 1944.

HEADQUARTERS, ALASKAN DIVISION, A.T.C. --- How Lt. Bassel Blakesmith, who used to run a grocery store in Chariton, Ia., nearly sank to his death in an Alaskan quagmire while rescuing a Russian flier hurled out of the gunner's cockpit of an A-20 Havoc being ferried to the Russo-German battle front has been revealed here.

Late in 1943, Lieutenant Blakesmith was awarded the Air Medal but military secrecy forbade telling the story until now.

As far as known, it was the first time an American saved the life of a Russian fellow flier in the western hemisphere since the United States entered the war.

Six days before Lieutenant Blakesmith rescued Lt. Constanta P. Demianenko, four of Demianenko's comrades in the Red air force were killed in the crash of two A-20s on the same Fairbanks-to-Nome ferry route. An air of tenseness was still noticeable among the Russian ferry pilots when word came of the new mishap. The rescue of Lieutenant Demianenko took place July 2, 1943, on the barren wasteland about 70 miles northeast of Galena, Alaska, a stop on the Fairbanks-to-Nome ferry route.

The Soviet airman, whose parachute had opened when he was flung out of the Havoc, spent two days wandering with a badly injured leg through the wilderness. Swarms of huge Alaska mosquitoes attacked him constantly.

He subsisted on one small square of chocolate which he had in his pocket and a grouse which he shot and gnawed raw.

The pilot of Lieutenant Demianenko's plane was flying through heavy overcast near the headwaters of the Kwiniuk river, between Moses Point and Nome, when Demianenko was pitched out.

It was some time before he was missed. When the pilot set his ship down on the Nome runway, he saw a deep dent in one of the rear stabilizers. The Russians concluded that Lieutenant Demianenko undoubtedly was flung against the stabilizer and killed.

When word of his vanishing was flashed to Ladd Field, Fairbanks, and the general location given, Lieutenant Blakesmith took off at once in a Beechcraft AT-7 to search for the Russian.

The American's low flying hunt was rewarded sooner than he hoped. He sighted a yellow parachute with the shroud lines stretched out to full length, indicating the flier who had descended in it probably lay dead in the harness.

A landing was out of the question with his wheeled plane but, swooping as low as he dared, Lieutenant Blakesmith made fairly certain no body was in the parachute harness. As long as his fuel supply held, he searched the area fruitlessly for a sign of the Russian.

Next morning, accompanied by Maj. R.C. Ragle, officer in charge of the ATC search and rescue squadron at Fairbanks, he returned to the scene in a float plane to resume the hunt. Again, the search was rewarded sooner than anticipated. They spied the Russian vigorously waving to them, and signaled their intention to come down on the nearest lake whither he should make his way.

Major Ragle stayed at the plane after they taxied to shore and Lieutenant Blakesmith set off through the bog land in the direction of the Russian. A mile or so enroute he sank to his armpits in a place resembling quicksand and extricated himself only after a desperate struggle.

"I thought I was a gonner and, believe me, I was really scared," he said later.

By the time he got back to the plane, the Russian was already there, his face and hands severely swollen from insect bites and his injured leg in urgent need of medical attention. They took off at once.

After several days in the state hospital at Fairbanks --- where American and Russian fliers have been treated side by side since the ferrying of United States planes to Russia began --- Lieutenant Demianenko was back on the Fairbanks-to-Nome route.

Three months after the Air Medal was pinned on his blouse in a ceremony at Ladd Field, Lieutenant Blakesmith still had not told his wife about the decoration.

"She knows I helped rescue somebody, but why tell her about the medal?" he asked.

The two Russia-bound Havocs lost shortly before Lieutenant Demianenko's adventure are believed to have collided in the fog. They belonged to a flight of four ships and the pilots of the two planes which got through to Nome last saw them entering a thick cloud at about 5,000-feet altitude.

The search for them was undertaken by Major Ragle, in an American plane, and a party of Red airmen in two Russian transports. The wreckage of both Havocs were sighted within about six hours.

The bodies of the Red fliers, Capt. I.N. Molseyev, pilot, and St. C. I. Schekachikhin, radio operator, comprising the crew of the one plane, and Junior Lt. A. D. Skorednev, pilot, and Lt. K.A. Zaremba, navigator, the crew of the second ship, were brought out next day. One plane had exploded and burned when it dived to earth but the other did not catch fire.

Three volleys from the firing squad echoed against the Alaskan mountains, followed by the bugler's silvery notes as he sounded taps.

At the same hour, Lieutenant Blakesmith, the former Iowa grocer, was wheeling low over the bleak muskeg along the Kwiniuk, pressing his successful search for the dead fliers' missing comrade.

For his part in rescuing the Russian navigator, Major Ragle was awarded the bronze oak leaf cluster for the Air Medal which he already wore. Major Ragle lives in Fairbanks and operated his own flying service there before the war. He is an alumnus of the University of Colorado and was once a geology teacher.

Col. Bassel Blacksmith's military career spanned 30 years and three wars. His first combat-related missions were flown during World War II, his final missions, in Vietnam. He retired in 1971, returned to Lucas County to pursue lifelong dreams of farming and raising cattle and died at age 90 on Dec. 8, 2003.

Maj. Richard Charles Ragle survived World War II as well, then lived with his family in Alaska and elsewhere. Late in life, he returned to Fairbanks and died there at age 78 on March 20, 1987.

We have no way to determine what became of Lt. Constanta P. Demianenko.