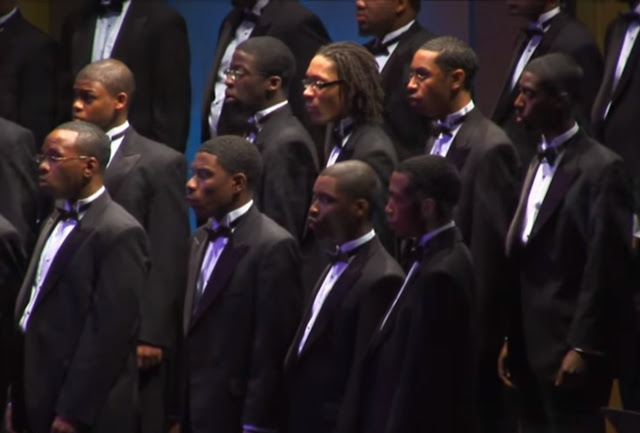 I've been preoccupied this morning with a National Public Radio piece that unpacks White House Chief of Staff John Kelly's venture into revisionist history on Monday --- his assurance via Fox News that the Civil War represented merely a failure to compromise and that Robert E. Lee was a fine fella who, perhaps, ascended bodily into heaven after his time on earth had ended. Here's a link to the article.

As with all race-related revisionists, Kelly eliminates enslaved black folks and their descendants from the narrative, implying that our greatest national disaster to date was just an unfortunate disagreement among white family members.

Anyhow, I feel the need for music --- and on this occasion what better than a rousing rendition of "We Shall Overcome" from the Morehouse College Glee Club.

All sorts of dirty little collective American secrets have been emerging from underneath their rocks in recent months, weeks and days --- racism, violence, treason, Islamophobia, homophobia, sexual exploitation .... You name it.

Chicken Little says "the sky is falling." Of course it's not. It's just tough to look at some of this stuff in broad daylight sometimes. But necessary.