Guns, lamentation & fruits of the spirit 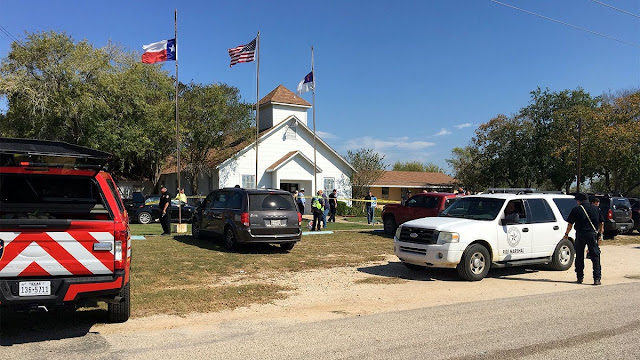 National Public Radio, generally a good source of accurate information, has the following to say this morning about Devin Patrick Kelley, 26, who shot at least 26 people to death Sunday morning inside First Baptist Church, Sutherland Springs, Texas, and wounded 20 more with an AR-556, a variant of the AR-15, a popular rifle based on the military's M-16:

"Kelley was a resident of New Braunfels, a suburb of San Antonio, according to public records and he had attended New Braunfels High School, a classmate confirmed to NPR member station KUT reporter Mose Buchele.

"He had been enlisted in the U.S. Air Force and was based in New Mexico from 2010, where he reportedly served in logistics readiness at Holloman Air Force Base until receiving a bad conduct discharge in 2014, Air Force spokeswoman Ann Stefanek tells NPR in an email.

"She says he was court-martialed in 2012 for assaulting his wife and child, sentenced to confinement for one year and reduced in rank to E-1.

"The (San Antonio) Express News says that Kelley unsuccessfully appealed his conviction in a military court in 2014.

'A law enforcement official told the San Antonio Express-News that Kelley wasn't believed to be a member of First Baptist Church, but had ties to the church through family members.

'In Comal County, Kelley only had faced minor traffic offenses in recent years. Kelley was licensed by the Texas Department of Public Safety as a security guard, and the agency's website shows he worked at Schlitterbahn Waterpark and Resort in New Braunfels.

'A spokeswoman for the park did not respond to questions.'

"At Sunday's news conference, TDPS Director Martin said there was 'a lot of work to be done' in the investigation."

So it's time for lamentation again. Send thoughts and prayers if you like; both are meaningless without action.

Acknowledge that the only reason to own an assault or assault-style weapon is to kill large numbers of people. If you know someone who has one or more of these you know a potential killer. Be careful around them.

Politicians, principally Republican, lack the moral courage to work toward keeping these weapons of mass destruction out of the hands of potential killers. So the killings will continue. The only questions are "where?" and "how many?"

Consider the fruits of the spirit listed by Paul in his letter to the Galatians and persevere: "But the fruit of the Spirit is love, joy, peace, patience, kindness, goodness, faithfulness, gentleness, self-control; against such there is no law."