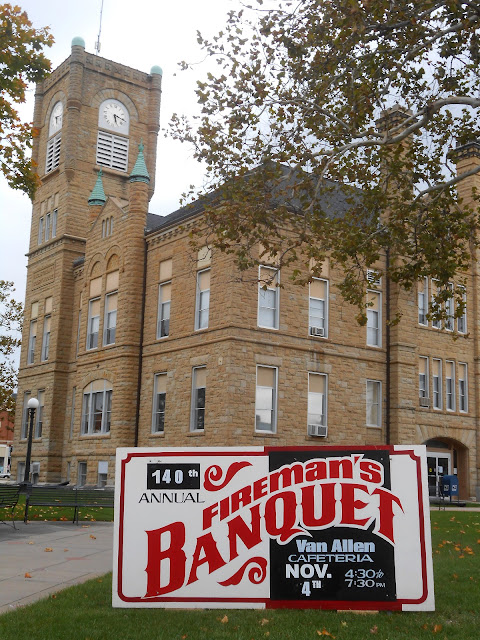 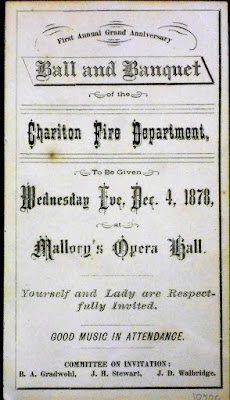 It's kind of hard to miss the big signs at all four corners of the courthouse lawn, but in case you have --- the annual Fireman's Banquet, this year marking the 140th anniversary of the department, is scheduled for Saturday at Van Allen School. The invitation to the first banquet, from the Lucas County Historical Society collection, is at left.

The department was organized formally on Dec. 7, 1877, in the aftermath of a fire on Oct. 29, 1877, that destroyed the first of three big buildings to stand on what we now call the Columbus School hill. Without proper organization and equipment, the residents of Chariton could do little more than stand by and watch as a source of great community pride was gutted by flames. Organization of the department filled that major hole in Chariton's defenses.

For many years, the banquet coincided more or less with the early December anniversary, but has advanced by now to early November. Escalloped oysters, another main dish and sides will be on the menu.

What won't be on the menu this year is a drawing for a cow --- and it seems unlikely a gold watch will be given away either. But both a cow and a watch were among the prizes offered back in 1887.

The Chariton Democrat began promoting the 10th anniversary banquet, as follows, in its edition of Nov. 3, 1887, 130 years ago this week:

"The fire boys will give their tenth annual banquet at Mallory's Opera Hall in about four weeks. As usual the boys will dispose of by lottery a fine gold watch, a cow, and other property. Mr. S.H. Mallory, who, as much as any man in the city, has a just appreciation of the services of our worthy volunteers, donates them a cow and directs the boys to select her from his herd of a hundred or more. Everyone can buy a cow ticket with the assurance that the animal will be a good one."

The 1887 banquet was held on Friday evening, Dec. 2, and and was reported upon as follows in The Democrat of Thursday, Dec. 8:

The tenth annual banquet of the Chariton Fire Department was held last Friday evening at Mallory's Opera Hall, and like all of its predecessors was a very pleasant affair to all concerned. All day long the good ladies of the city were busy arranging on the tables the great collation of good things their skill had provided. About half past five the doors were opened to all those who were hungry and had a half dollar to invest in a chance for a supper and a chance for a cow. In the first there were no blanks. Everybody drew a prize. But on the cow-drawing, only one fortunate appeared.

The supper over at eight o'clock, the tables were removed and the seats arranged for four or five hundred people present.

The programme opened with a little surprise for many, and most of all to the happy victim. Mr. N.B. Branner appeared on the stage evidently prepared for something. Then Charles Fitch Jr. called for Marshal John H. Coles to come forward. With more fear and trembling than he would display in facing a gang of burglars, he mounted the stage, when he was attacked by Mr. Branner, who in a short but exceedingly well chosen address presented Mr. Cole, in behalf of the citizens, a fine gold watch as a token of their appreciation of his faithful services. It was a complete surprise to Mr. Cole.

After this happy beginning, Mr. J.A. Penick was introduced and addressed the audience, reviewing the many hardships the boys had encountered and the many obstacles they had surmounted in building up the acknowledged best volunteer fire department in the state. Mr. Penick closed his very fine address by presenting to the ten-year members the diplomas to which they were entitled and the medals which their brother firemen had provided. These diplomas are as follows:

THE CHARITON VOLUNTEER FIRE DEPARTMENT
This is to certify that (          ) whose name appears hereon is a member of the Chariton Fire Department (Hose or Hook & Ladder) Co. No. 1, and has been an active member for ten consecutive years, and all dues, fines and assessments are paid in full today. This Diploma is granted him for ten years continuous and meritorius service. Given this third day of December, 1887. C.E. Howard, Foreman; G.W. Alexander, Mayor; D. W. Selby, Secretary; G.W. Larimer, Chief.

On behalf of the ten-year members, Mr. N.B. Branner's eloquence was again called into requisition and he briefly responded. Mr. G.G. Reedside, as spokesman for the Lucas boys, a good number of whom were present, made a neat little congratulatory address.

Then came the drawing, the following being the lucky holders of the tickets which drew the prizes: A.N. Wright, easy chair; Horace Neiman, gold watch; C.W. Slattengren, silver set; and Jas. Callahan, the cow.

It was a successful affair throughout and added about $180 to the treasury of the department.

Mr. W.H. Wright's Opera Hall Orchestra furnished the music for the entertainment and for the dance which followed.
Posted by Frank D. Myers at 6:05 AM