Key to the city (of the dead) 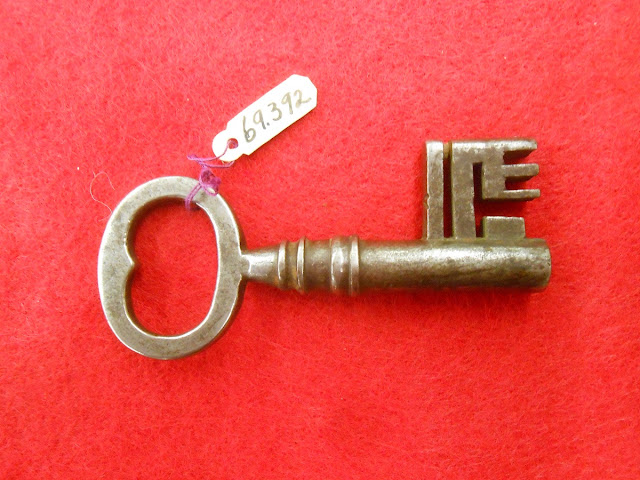 I've been admiring a key with considerable presence this week while getting it ready to display in a case with other memorabilia related to Lucas County law enforcement and Chariton city governance. If you saw it in person, you'd realize that the key is about three inches long and quite heavy.

It once opened, according to donor Louise Stanton Leonard (1896-1988), the front gates of the Chariton Cemetery and came to the society during 1969 as she was downsizing and preparing to move to Ames after the death of her husband, Harold S. Leonard (1892-1968).

We can't prove that, of course, because the gates it may once have opened have long since vanished and the posts from which they were suspended were torn down in 1937 when the current fieldstone entrance was built.

Louise's grandfather was Dr. James Eddington Stanton, a physician who also was one of the 19 stockholders who formed the Chariton Cemetery Co. during June of 1864. They purchased 80 acres just south of town and laid out the original burial ground, replacing what we now call Douglass Pioneer Cemetery and a smaller graveyard on what now is the site of Columbus School.

By the late 1880s, Stanton had acquired the interests of most of the other stockholders and the development, maintenance and beautification of the cemetery gradually became his principal occupation. When his two sons, Dr. Theodore P. Stanton and Dr. John H. Stanton, joined the family medical practice he more or less retired and devoted full time to the cemetery until his 1908 death.

J. E. Stanton also was responsible for the 1887 design and construction of a 30-vault mausoleum, generally known as the Stanton Vault, that served as a receiving vault for the cemetery as well as permanent resting place for Stanton family members and others who wished to purchase space in what became for a time the cemetery's most desirable address.

Louise Stanton Leonard was a daughter of Theodore P. Stanton, who seems not to have taken much interest in the cemetery although he apparently held onto this key.

The cemetery passed instead to Dr. John H. Stanton, who managed it --- somewhat inconsistently it appears --- until his own death during 1922. Two years later, the city purchased the cemetery for $10,000 from the J.H. Stanton heirs.

The main entrance to the cemetery always has been in the same place, just off what now is Highway 14, but the original gateposts, from which the gates in question most likely were suspended, were much closer to the highway and the entrance was only 12 feet wide. As automobiles replaced horses and buggies, it became a hazard.

During August of 1937, Works Progress Administration funds and workers became available to help develop the current entrance,  designed by landscape architect Ray Wyrick, 16 feet wide and flanked by out-curving fieldstone walls. Total cost of that project was $2,318 with the city contributing about $700 and one worker to supplement federal funds and 10 WPA workers. 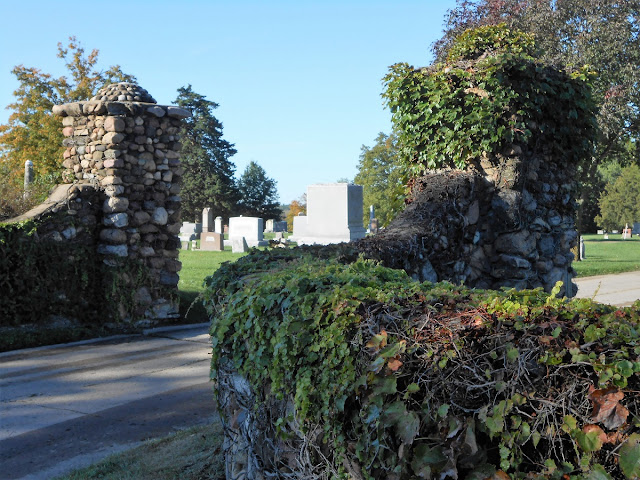 If the original gates survived, no mention was made of them when the old posts were destroyed and work on the new entrance commenced. According to reports published in Chariton newspapers at the time, there was no plan to install gates at the new entrance. Instead, a heavy chain was to be used to close the cemetery when necessary.

The Stanton Vault, once J. E. Stanton's pride and joy and the final resting place of himself and other family members, was demolished by the city during the 1950s after it had become both something of a hazard and the object of morbid curiosity. Sixteen occupants remained at the time, including the Stantons, and all were reburied in the footprint of the old vault.

The Theodore P. Stanton family, however, had declined opportunities to be interred in the vault and their graves --- including those of Harold and Louise Leonard --- are located elsewhere in the cemetery.

The cemetery itself now is one of two Chariton National Historic Districts listed on the National Register of Historic Places. The other is the Courthouse Square Historic District. And the population of this city of the dead, estimated at more than 13,000, is more than double Chariton's current population.

Villisca has an almost identical fieldstone fence surrounding the cemetery. It was also built by the WPA crew in the late 1930's. At the same time, they built a city swimming pool. The old stone entrance pillars from the cemetery were removed and placed at the driveway entrance and walk in entrance at the swimming pool. About 40 years later, they were located in a storage building, the buyer had not had the heart to melt them down. They were put back at the cemetery and are still there today. Recycling at it's finest!