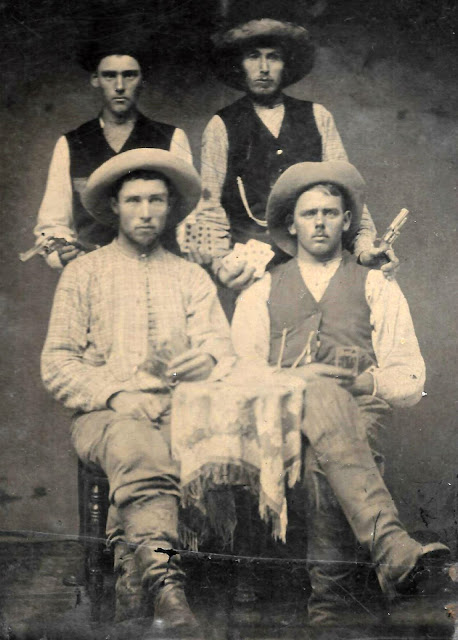 I need a break from the Henry T. Hiester saga, but hope to wrap that up tomorrow. In the meantime, here's a sample of the work of another photographer, most likely taken in Chariton, perhaps --- based mostly on the costumes and slight knowledge of the families that might be involved --- during the 1870s.

The pose is not an uncommon one for young men of that time on a lark --- the two standing men are holding pistols, the seated man at right a glass (for whiskey) and I'm guessing the seated man at left was holding a deck of cards, too, although he moved his hands at a crucial time and the result was a blur.

This was one of 11 tintypes donated to the historical society in 1977 by Morris Scott (1888-1983). The men are of the generation of his parents, Simon Scott and Ellen Morris, but Morris did not know who most of the subjects were, other than that they were members of either the Scott or Morris family.

The tintype is a little battered --- the paper sleeve that once contained it has long since vanished, but the image still is clear.

It's difficult to date a tintype. The form was most popular during the 1860s and 1870s, but it persisted until the turn of the 20th century.

Each tintype was unique --- unless a multi-lensed camera were in use. And the process was very simple. The camera cast a direct positive image onto a thin coated metal sheet topped with photographic emulsion. The result could be developed quickly, dried, coated with varnish, dried again, slipped into a paper sleeve and handed to the subject within minutes.

There were no negatives, so if each of these young men had wanted a copy and a single-lense camera were in use, four separate exposures, each slightly different, would have been required.

Although widely used in studios, the technique also was popular because of its simplicity with itinerant photographers who traveled from place to place in a wagon and/or set up booths during fairs, carnivals or other public events.

However this "snapshot" came into being, it's interesting and a little poignant to look into the faces of young people whose images were captured 150 years ago and realize that, although the social context and timeframe differ, their hopes and aspirations didn't differ significantly from those of young people today.
Posted by Frank D. Myers at 6:06 AM