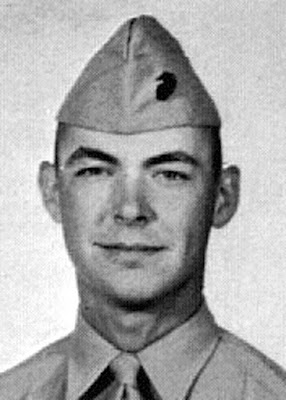 In the interest of fair disclosure, I published a version of this for the first time during 2003 to an outfit called The Virtual Wall. Then, in slightly amended form, to The Lucas Countyan during 2005. So it's a little dated. Had he lived, Richard would be 72 now.

The Ken Burns/Lynn Novick film "The Vietnam War" --- all 18 hours of it --- began airing last night on PBS. That's all very well and good and perhaps those who watch it will absorb some of the context of a war that's been live-streaming for those who lived through it ever since.

It remains important to remember those who died, name by name; and to listen to the stories of those who made it home.

It won't be long now until Richard Allen Cesar will have been among the dead twice as long as he lived, but I see him clear as day sometimes — Compact, dark hair, dressed with military precision in blue jeans and black cowboy boots, killer smile — in the old top-floor study hall at Russell High School. Then I start to think about it and he moves into the shadows 40 years have imposed.

Richard was the first from our part of southern Iowa, one of the first Iowans, to die in Vietnam. He had lived among us only three years, but some folks are memorable and others aren't. Richard was. He honored us with his presence.

Born 21 December 1944 at Boone, in central Iowa, his parents were John T. and Betty Cesar. They soon moved to Rockford, Ill., which was the Cesar family home, and Richard lived there for 14 years.

When he was 15, he came to Russell in Lucas County, Iowa, to live with his uncle and aunt, Mr. and Mrs. Harold Kastner. His sophomore and junior years were spent at Russell High School. Richard's parents then moved from Rockford to Corydon, just south of Russell in Wayne County, Iowa, and he transferred to Cambria-Corydon High School for his senior year, 1962-63.

Richard really wanted to be a U.S. Marine. He signed up 28 February 1963 under a 120-day deferred enlistment plan and entered the active service on 11 June 1963, just a couple of weeks after graduation.

By the spring of 1965, Lance Corporal Richard Allen Cesar, a gunner, was on Okinawa and a member of Weapons Platoon, Alpha Company, 1st Battalion, 9th Marines.

The 9th Marines were among the first into Vietnam that spring, and Richard was among them. On 1 September, he received a battlefield promotion to corporal.

Not long after, he was assigned with a few buddies to Alpha Company, 1st Battalion, 1st Marines, to add combat depth to an inexperienced unit. A few days later, on 30 October 1965, he died on Hill 22 near Da Nang — not yet 21.

Robert Nordstrom, reassigned to Alpha Company with Richard and others, recalled the early-morning chaos of 30 October when hundreds of VC overran Hill 22. At daybreak, as order was being restored, Nordstrom ran to the bunker where his friends, Richard and Lance Corporal Richard Dennis Sharp of Dayton, Ohio, another of those recently transferred to Alpha Company, had been. He found them dead on the floor. Friends had died together.

When the news of his death reached Corydon, the editor of his hometown newspaper, The Corydon Times-Republican, characterized Richard in words that seem kind of quaint today — "a good student and a polite, gentlemanly lad, not large but capable of taking care of himself, always industrious and polite." I guess that’s the way I remember him, too.

Richard's parents had moved back to Rockford before his death, and so that was where he "came home" to. Funeral services were held on 9 November 1965 at Rockford and he was buried in Willwood Cemetery there. He was survived by his parents and a brother, Ed.

Almost four years to the day after Richard died, I landed in Vietnam myself.

I served with Richard Cesar, Richard Sharp and Terry Neumeir stateside. I would like to think that Richard Cesar and I were best friends. We often spent our weekend liberty together, L.A., Disneyland, roller skating. I, among others, had been reassigned to various units. I arrived the following morning as reinforcements to the hill where all of them had fought and died. Another Marine, knowing Richard Cesar and I were close friends, told me to sit down. I was then told that Richard had been killed, along with the Richard Sharp and Terry Neumeir. The description of Richard Cesar was accurate. He was neat, clean, immaculate, friendly, yet had a seriousness about him. And he damn well was proud to be a U.S. Marine and serve his country. I think of him often ....

Richard, you were with my brother on that fateful day, October 30, 1965. He was Sgt Marcos Hernandez. Knowing that he was not alone, that you and the others in Alpha Co, 1st Bn, 1st Marines, were all together gives me some form of comfort. May you all be together even these many years later. Someday we may all meet, in the presence of our Savior. It would be my pleasure to meet you, Richard. Until then may God hold you in the palm of His hand.

From the sister of Sgt Hernandez who was with you, Rachel H Morales

In a few days it will be the anniversary of "Hill 22" --- October 30th, 1965. I will never forget that night as long as I live. I am Richard Nordstrom, a friend of both Richard Cesar and Richard Sharp. There isn't a day that goes by that I don't think of both of them. I miss their jokes and above all their laughter. They were both Marines to the fullest and gave their all for each and everyone of us. Semper Fi, troops!

A NOTE FROM THE VIRTUAL WALL

On the evening of 27-28 October, the VC struck the newly built Marble Mountain helicopter facility on the Tiensha Peninsula and the Chu Lai SATS field. In the two attacks the VC caused considerable damage to aircraft parked on the flight lines, killed three Marines and wounded 91 others --- but left 32 dead, 4 wounded, and 4 captured behind.

Two days after the airfield attacks, the Viet Cong attempted another probe of the Marine defenses, not at the base area, but against the defensive perimeter on Hill 22, south of the Tuy Loan River, primarily manned by the Marines of Company A, 1st Battalion, 1st Marines. The action began at 0100, 30 October, when 10 to 15 VC walked into a squad ambush about a kilometer south of the hill. The Marines opened fire and killed three of the enemy, but were unable to notify their company commander of the contact due to a communications failure. All was quiet for about two hours, when a larger force enveloped the Marine squad, killing three and wounding six. At 0315 the rest of the VC force attacked the main Marine positions on Hill 22. Enemy troops, supported by two recoilless rifles, penetrated about a third of the northwestern perimeter. About 45 minutes after the enemy launched the main attack on Hill 22, three UH-34s landed a 13-man squad from C/1/1 on the hill. The A Company commander rallied the Marines, counterattacked, and drove off the enemy. Marines casualties were 16 dead and 41 wounded, while the Communists left behind 47 bodies and one wounded.
Posted by Frank D. Myers at 6:16 AM

I well remember the 13 people on our company ship who died on a milk run to Da Nang. I remember the Navy guys who were catching a flight back to Da Nang to out process and go home, they never made it. I remember our Company Commander, a decent man who treated his company fairly and the safety Officer who was old by our usual standards of 20 something kids, he was a grandfather with grandkids. I remember our Door Gunner and Crew Chief, as quiet and diligent men, who never ever flinched going in to pick up downed aircraft in places angels would fear to tread, they too met a tragic death in a place called "Dog Patch". And last but not least was a kid from the south, drafted into the army who was simply going to the PX on his day off in Da Nang, a hard working hillbilly of a man who left a wife at home. They follow me around as I grow old, not changing. They never grow old, they don't get to see their children grow up, or for that matter even have children. They and thousands more gave up their lives for who knows what reasons, but I am sure no television documentary will ever do justice to their loss. There is no honor dying for a country that keeps on making the same stupid mistakes and continues to put people needlessly in harms way.