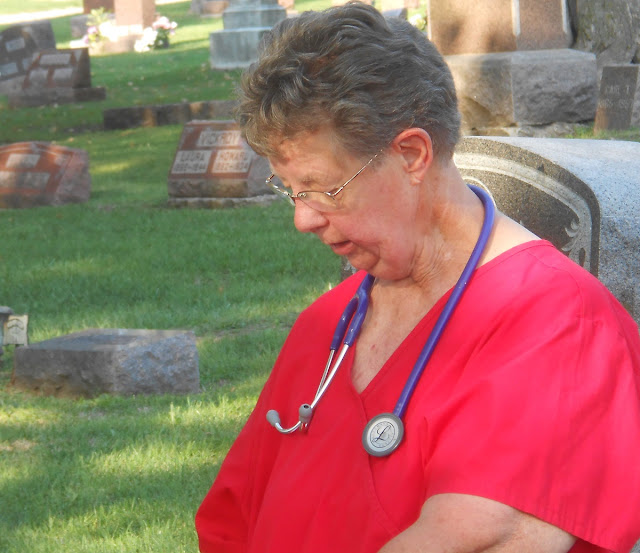 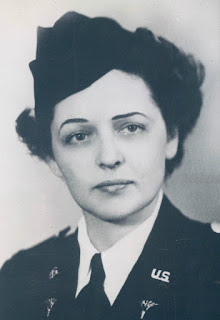 Note: This is the fifth (and final) in a series of five scripts prepared for presenters during last Sunday's 14th annual Chariton Cemetery Heritage Tour, "Neighbors in Section E." The subject is Capt. Helen Malony Talboy, an heroic World War II U.S. Army nurse who came home after the war to serve as superintendent of the Iowa Women's Reformatory at Rockwell City. She was portrayed by Jeanne Taylor.

The tombstone over there identifies me as "daughter" rather than as a nurse and there is no mention of my World War II service on it. Even the veteran flag holder once located at my grave was, until quite recently, among the missing.

My name is Helen Malony Talboy, and I was indeed a daughter --- of Dr. John H. and Orpha Malony --- but I was a nurse, a decorated World War II veteran and a mother, too. Some have called me a hero, but I wonder about that. Most nurses are heroes at times and need not serve on the frontline in wartime, as I did, to deserve the designation.

I was born during 1907 and moved to Chariton as a child with my parents and sister, Ruth. Dad was a dentist and we lived comfortably here. In 1927, I graduated from Chariton High School, then three years later my mother died too young and was buried here.

I hadn’t quite decided to do with my life, but had been working in a doctor’s office before Mother died. After that, I enrolled at the Mercy Hospital School of Nursing in Burlington, graduating in 1934.

The next year, I married a traveling salesman named Willis E. Talboy. That marriage turned out to be a mistake and we divorced, but I kept the surname as a souvenir and, if anyone asked, usually replied that Willis had died. It was simpler that way.

When World War II broke out, I was working as a nurse in Des Moines and when the call went out for nurses there was no doubt that I would volunteer. I enlisted during November of 1942 and was deployed overseas during April of 1943, assigned to the 95th Evacuation Hospital, attached at various times to both the 5th and 7th armies.

This was a 400-bed mobile hospital staffed with approximately 40 nurses, 40 doctors and more than 200 enlisted men. When the hospital landed in Italy on Sept. 9, 1943, it was the first U.S. hospital established in Europe during World War II. Another amphibious landing --- at Anzio --- followed. In both instances, I was there.

Maj. Gen. Norman T. Kirk, surgeon general of the U.S. Army, had this to say of my service before Anzio while writing about me after the war for The American Magazine:

"When Lt. Helen Talboy went overseas, her convoy was attacked again and again by submarines. In the blistering or muddy days of the Tunisian campaign, she sometimes served within six miles of the front.

"She landed with the infantry at a beach-head in Sicily, followed the battle to Palermo, and went on to Italy, only to have her ship bombed in Salerno bay.

"Wet and bedraggled, wearing nothing but pajamas and tennis shoes, she was finally set ashore. Next day she was at work again in the surgical tent of her evacuation hospital unit, supervising the care of men upon whom the enemy's shrapnel and bullets had done all but their worst. It was enough to try the strongest men.

"But weeks later, after all her hardships, Lt. Talboy was one of the first to volunteer to land with the infantry at Anzio, just south of Rome, a maneuver that proved to be one of the most perilous flanking movements our troops have undertaken in Italy. Everybody knows now the bitterness of that furiously contested fight at Anzio. None knows it better than that woman from Iowa who again offered her life for her country there."

At Anzio, I ran into Associated Press correspondent Kenneth Dixon, the only U.S. civilian reporter there, who made me the centerpiece of a dispatch dated Feb. 8, 1944, and published nationwide on the following day.

“If the courage of American nurses ever is questioned, the story of Helen Talboy of Des Moines, Iowa, and her gang of spunky girls on the Anzio beachhead will supply the answer,” he begam.

Dixon went on to describe my exhaustion and occasional despair and to speculate that my nurses and I were near the breaking point. What would she do in a crisis, he asked. Events on Feb. 7 provided the answer:

"When German bombs hit the hospital, killing 27 and wounding more than 60 --- including three nurses killed and three wounded --- Helen was on duty in the surgical section, which was punctured by hundreds of shrapnel holes.

"Without a moment's hesitation she took charge. She collected the surviving nurses, gave them bandages and first aid equipment and started them caring for the wounded, lying crumpled and moaning over the bloody hospital area.

"She supervised the first aid, and saw to it that the dead were covered as quickly as possible, bringing some merciful semblance of order to the whole nightmarish scene.

"The same nurses who seemed so near breaking a week ago, were busy elsewhere. Late Monday night they were still working. Nurses from other units came up and volunteered to help, but these tired, stone-eyed veterans insisted on caring for their own.

"Nearby, I saw some men weeping, standing in small shaken groups. Some of the nurses were crying, too, but soundlessly --- the tears on their cheeks in the pale moonlight were the only sign.

"Eventually their grief would get the better of them, for these dead and dying were not strangers but their comrades of many months. And their fears would return.

"But hundreds of soldiers who lay wounded in those tents never will forget how Helen Talboy and her gang of spunky girls discarded their fears, postponed their grief, and did their jobs when the chips were down."

I received many awards and honors as a result my service, recorded in that true story which seemed to capture America’s imagination. The New York Herald-Tribune named me one its 10 outstanding women of 1944 nationwide. But I continued to serve, making numerous public appearances on behalf of the war cause after I returned stateside, until it ended and I was honorably discharged as a captain.

After the war, I returned to Iowa and during 1946 was appointed superintendent of the Iowa Womens Reformatory at Rockwell City, a position I held until 1953. During that time, I was credited with many innovations that not only improved the lives of the women imprisoned there but also improved their chances of success when set free.

During 1951, when I was 43, I was able to make a longtime dream of mine come true when I adopted a day-old boy with red hair who I named Richard Malony in honor of my brother, Richard, and my parents. When asked why I decided to adopt, I replied simply, “Because I wanted to.”

In 1953, however, the pressures of my job and of full-time single parenting began to take their toll. So I retired from my position in Rockwell City and returned to Des Moines to live and work and raise my son. These were among the happiest days of my life.

During May of 1969, when I was 62, I entered the Veterans Administration Hospital in Des Moines for what was expected to be routine surgery. But due to complications, I died there on May 25.

My sister, Ruth, and my son found themselves unexpectedly making funeral arrangements, but there was little doubt that I would wish to be buried here with my parents.

Few who remember me or my story remain, but when you think of the veterans who are buried here, remember the role that women like myself played in that great war, too.
Posted by Frank D. Myers at 5:14 AM

2/17/2019 I am married to Her Son, Richard Malony Talboy. I am so honored to know that his Mom was such a wonderful woman, nurse, soldier. He is a wonderful Man surely taught well by his Mom. There are many parallels in our lives. My Mother's name also Helen. His Grandfather a Dentist. I have been in the the dental field since 1975. Strange but true. This made me cry, but am so proud that wonderful woman was honored and decorated as she should have been.

I am hoping to one day visit Iowa and the town where she rests.

Frank - Marvin Williams contacted you about my screenplay project related to the 95th nurses. Do you have any contact information for Diane H. Talboy or Richard Malony Talboy?
Any help would be much appreciated.
Great blog piece on Helen (and the others who died in that cemetery)!