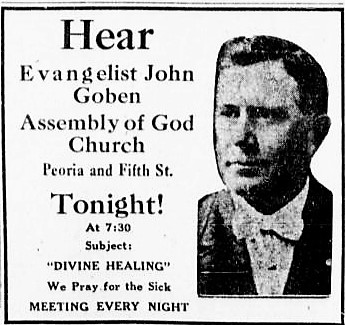 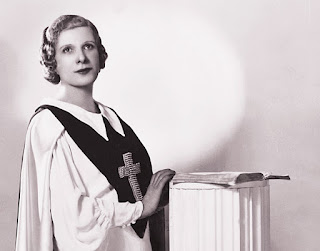 There's no doubt that labor giant John L. Lewis is the most famous native son of the once-thriving coal mining town of Lucas. But for a time in the 1920s, another John --- Assembly of God preacher John Goben --- gave Lewis a run for his money in the fame department, although in another field.

Like Icarus, however, the Rev. Mr. Goben flew too close to the sun --- in this case Aimee Semple McPherson (above), evangelist, media maven and founder of the International Church of the Foursquare Gospel. Overreaching himself, John crashed, died too young in far-away Los Angeles and now rests in relative obscurity in Fry Hill Cemetery.

A well-crafted obituary published on Page 1 of The Herald-Patriot of June 1, 1933, tells much of his story, glossing over as obituaries usually do, the rough spots.

John was converted during a series of 1904 gospel meetings at the Presbyterian Church in Lucas and, "filled with the Holy Spirit," called to preach. After a couple of years of honing his skills near home and farming on the side, he entered field of pentecostal evangelism with Sophronia, a preacher in her own right, by his side.

After the Assembly of God denomination was organized during 1914, Goben was named a general presbyter and placed in charge of the new group's Iowa and northern Missouri district. He also launched an evangelistic organization that took him coast to coast. The advertisement at the top here was published in The Tulsa World during 1922.

In 1926, Goben shifted the emphasis of his work to Des Moines where he pulled several pentecostal missions together to form the Des Moines Gospel Tabernacle on East Grand Avenue.

And in 1927, John --- and the Tabernacle --- hosted a highly successful series of evangelistic meetings in Des Moines conducted by the famed (or infamous, depending upon one's outlook) Aimee Semple McPherson.

Goben became utterly enthralled by McPherson and followed her home shortly thereafter to Los Angeles where he was named an assistant pastor of her Angelus Temple and then, field secretary (or general superintendent) of the Foursquare organization, in charge of planting Foursquare churches nationwide.

There is absolutely no question about the facts that John was a very effective preacher and a talented organizer and administrator. During his two years with the organization, John enlisted 148 branch churches --- including his own Des Moines Tabernacle --- which became the backbone of Foursquare International.

But during 1929, as his obituary states it diplomatically, he "withdrew" from the organization. In reality, he was cast out --- with a vengeance.

There are a couple of theories about why this happened. One is that Goben was romantically infatuated with McPherson, but spurned by her, and so set out to get even. Another theory holds that he became aware during his work at Angelus Temple of the moral and financial corruption surrounding his idol and set out to purify the organization --- and Aimee. The third suggests that he became entirely disillusioned with both McPherson and her organization and was interested principally in exposing their dirty secrets to public view and redirecting Foursquare back onto the straight and narrow.

Whatever the case, he hired private investigators and collected affidavits, then staged a confrontation. This was a huge miscalculation. Aimee fainted, as she was prone to do, then McPherson and her organization turned full fury upon him and he ended up, battered and bruised, on the street. Four Los Angeles-area Foursquare congregations followed Goben off the mother ship, but not enough to provide traction.

The confrontation seems to have broken Goben, however. By 1930, Sophronia was back in Lucas County, where she divorced him. His critics claim that during the next three years he deteriorated into a "homeless drunk." It was during this period that John published a pamphlet entitled, "Aimee: The Gospel Gold-Digger."

John died on Sunday, May 21, 1933, at a Los Angeles hospital and here's how his obituary describes his final months: "He suffered a breakdown in health and for a time was ill with pneumonia. He rallied from this illness and went to Joliet, Ill., where he conducted a very successful revival campaign. While there last January he was again stricken with double pneumonia. He improved somewhat and was able to return to a warmer climate in California but soon after his arrival there was again taken ill and was removed to the hospital where it was learned that he was also suffering with a cancer and other ailments."

Last rites were held at a Los Angeles funeral home, then his remains were placed on board a train bound for Lucas, where funeral services were held on Sunday afternoon a week later. Still honored in his native land, the crowd of mourners filled the church and church basement, then spilled outside across the lawn where loudspeakers had been installed. The Rev. Archie Beals, pastor of Russell's First Baptist Church, was chosen to preach the funeral.

Burial followed on Fry Hill's beautiful hilltop, overlooking the Whitebreast valley, a considerable distance from the West Coast scenes of his triumphs and disasters.

Sophronia was listed among John's survivors, so it is possible that they had reconciled as the end neared. She continued to live in Iowa, apparently on good terms with the wider Goben family, until her own death during 1969. She is buried in Indianola's I.O.O.F. Cemetery with her parents.