A bootlegger's car bomb for the county attorney 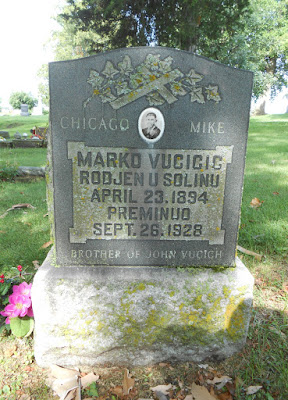 Yesterday's post entitled Moonshine, mayhem, Chicago Mike & old Tipperary reminded Cindy Threlkeld that Marko "Chicago Mike" Vucich, Lucas County's best-known hoodlum, had been a prime suspect, back in 1927, in a car bombing that targeted her grandfather and his family.

Chariton lawyer James Delman "J.D." Threlkeld was first elected Lucas County attorney during the fall of 1922 and took office during January of 1923, serving thereafter three terms. As a result, he was charged with leading the prosecution in the many, many bootlegging cases that clogged county courts  and kept law enforcement fully occupied during the 1920s.

Here's the United Press dispatch that went out from Chariton on Sunday, Feb. 13, 1927, and was picked up by daily newspapers across the region on Monday, Feb. 14:

CHARITON, Ia., Feb. 14 --- The automobile of J. D. Threlkeld, county attorney, ,was blown to smithereens by a charge of dynamite placed in the machine (early Sunday morning) shortly after the county official had conducted a booze raid in the vicinity of Tipperary.

It is believed that bootleggers sought this method of getting revenge because of Threlkeld's activities against the illicit liquor industry.

Another car belonging to Threlkeld's son was slightly damaged by the explosion. Several windows and a wall of the garage which housed the automobiles were also blown out. The dynamite had been placed under the hood of Threlkeld's machine and a fuse run to the outside of the garage.

By 1927, Chicago Mike had moved himself and his new wife, Leona, from the hardscrabble and remote mining camp of Tipperary, in Pleasant Township --- his headquarters for roughly 10 years --- up the road to the more cosmopolitan (and more conveniently located) mining town of Melcher. But Tipperary, Olmitz, Williamson and Chariton remained as important outposts of his illicit bootlegging and gambling operations.

I've found no indication that anyone --- including Chicago Mike --- ever was charged or prosecuted in the Threlkeld bombing. So it remains among Lucas County's "cold cases," unlikely ever to be solved. Mike was killed the following year in a high-speed crash into a street car in Des Moines. So if he were responsible, the case resolved itself.

There are some peculiarities involved in the reporting of this case in Chariton's newspapers, by 1927 reduced to the Tuesday Leader and the Thursday Herald-Patriot.

In both cases, the story was "buried" well below the fold. There was no mention of the Tipperary-area raid that had preceded the bombing --- nor was there any outraged editorializing. It's unwise to attribute motives from 90 years down the road, but it almost seems as if Chariton's newspaper editors had been intimidated, too, by the blast.

Here's the report from the Feb. 17 Herald-Patriot report, "Threlkeld was Victim of Fury: His Garage Was Dynamited on Saturday Night and Wreck Was Considerable."

"County Attorney J.D. Threlkeld drove home late on Saturday night and put his car in his garage, it being a Gardner sedan. This was perhaps near one o'clock. At two o'clock an explosion was heard which extended to the remotest parts of the town, and aroused the occupants in the Threlkeld home. During the interim of one hour, some culprit had slipped into the garage and placed an active dynamite bomb and made his getaway.

"The car is a practical wreck, besides doing several hundreds of dollars of other damage. The garage was a tile structure and was considerably demolished. There was another car in the building belonging to another member of the family, but it was not greatly damaged.

"The destruction probably is not as complelte as the actor desired, but it shows the disposition of the unknown vandal. Mr. Threlkeld has been quite vigorous in the prosecution of liquor cases, and bootleggers, and he believes here lies the motive. Someone covertly sought to take revenge. He says he had received anonymous threats but was not alarmed by them, but here is no doubt some preliminary handiwork."

Leader editor Henry Gittinger's report on the preceding Tuesday was just downright peculiar --- picked up, he wrote, from a "special sent out from Chariton" and published under the following rambling headline: "Reprisal Was Probably the Prime Motive: If So it Proved Dastardly Attempt to Even Up On a Matter Which Will remain Under Cover."

No mention was made of the Tipperary raid, but Henry did add the sentence, "It is said the culprit is known and will be apprehended and made to answer."

If that was the case, no "culprit" ever was arrested and charged. Nor was there further reporting on the case.

As a footnote, it's interesting to note that the Threlkeld vehicle was a "Gardner," a high-quality brand assembled in St. Louis between 1920 and 1931, when pressure from big-time automakers forced the smaller independent out of business.

We don't know what model year the Threlkeld Gardner was, but here's an image of a 1927 sedan --- a fine looking vehicle indeed.