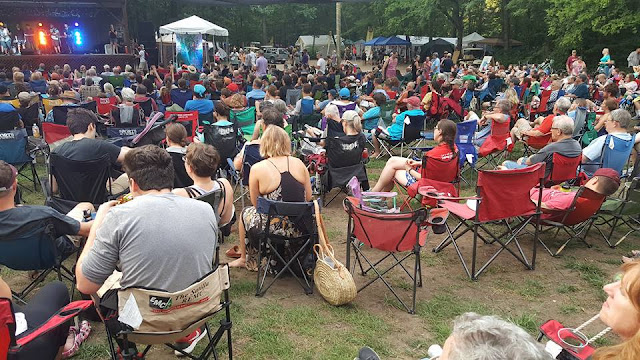 I borrowed a photo this morning --- without asking permission --- from my Facebook friend Bill Kerns, a Chariton boy now gainfully employed as a Disciples of Christ preacher in Illinois. He's attending the 2017 edition of Wild Goose Festival, which wraps up today in Hot Springs, North Carolina.

The front page of the festival's web site describes it this way: "... an art, music, and story-driven transformational experience grounded in faith-inspired social justice."

The event, which I believe draws about 5,000 annually, has been held since 2011 and is modeled, as many good things are, after a British event called the Greenbelt festival. Although rooted in progressive Christianity, it's open to all --- believers in any faith tradition or in none at all.

Here's a blog post written by the Rev. Gwen Fry, a trans Episcopal priest in the Diocese of Arkansas, that talks a little more about the event and her experience with it.

I see from the lineup (and photos posted here and there online) that some of my favorite progressives are there this year in various capacities, including Frank Schaeffer, Brian D. McLaren and Nadia Bolz-Weber.

This is not an event that attracts much media coverage. I'm relying on Bill's occasional posts from the festival as well as other scattered dispatches.

There are no good old boys sitting around down there in Hot Springs this weekend saying outrageous things about everyone they perceive as the unredeemed "other." Coverage of that sort of thing is what we've come to expect, and the media are glad to oblige.

But the problem here is not so much the media --- as it is us, what we expect and how we interact with the result.


There was a modest kerfuffle out there last week in that place where faith and sexual orientation intersect when Eugene Peterson, now 84, pastor, pundit and producer of what I'm told is a popular paraphrase of the Bible entitled "The Message," came out for same-sex marriage, then reversed course a week later.

Matthew Vines, author of God and the Gay Christian, offers his perspective on the whole affair here.

It would appear that the venerable Mr. Peterson caught holy hell from the religious right --- including a request for clarification from Nashville-based LifeWay Christian Resources, one of the world's largest distributors of what sometimes are called by some "Christian" books.

If the case earlier this year of another generally progressive Christian author, Jen Hatmaker, is any indication, positive statements about same-sex relationships are viewed by LifeWays as sufficient cause to halt distribution of an author's works.

Vines makes the point that Peterson's vacillation, whatever motivated it, is likely to cause damaging disappointment to LGBTQ people in search of affirmation.

Which is true up to a point, I suppose. On the other hand, a major part of the problem here, again, is "us." Affirmation of LGBTQ people from religious leaders certainly is appreciated, and helpful; but it's unwise to base self-worth upon the anticipation of it.

Discounting various theories about why folks voted for Trump last November, Pitts concludes "... people who dislike Mexicans and Muslims, people who oppose same-sex marriage, people mortally offended at a White House occupied by a black guy with a funny name, they voted for Trump. That’s the reality, and it’s time we quit dancing around it.

"This has been said a million times: Donald Trump is a lying, narcissistic, manifestly incompetent child man who is as dumb as a sack of mackerel. But he is the president of the United States because 63 million people preferred that to facing inevitable cultural change. So I am done asking — or caring — what’s wrong with him. Six months in, it’s time we grappled a far more important question.