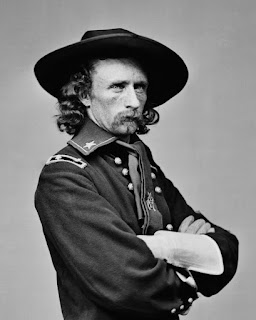 July 4, 1876, was a Tuesday, too, and in Chariton Lucas Countyans had celebrated the centennial of U.S. independence in a big way --- and quite successfully, too --- then settled back to rest up and get on with their summers.

But on Thursday, July 6, the shocking news of what now is generally called the Battle of the Little Big Horn, sometimes Custer's Last Stand, reached town on a morning train --- as copies of the Burlington Daily Hawkeye fresh from the press were unloaded and distributed.

The Hawkeye, in its time, was to the south of Iowa even more important than The Des Moines Register used to be in later years as a principal source of state, national and world news. Somewhat later in the day, the Chicago papers arrived, carrying similar preliminary reports.

Readers were shocked to learn that some days earlier, on June 25, as they were preparing to celebrate U.S. Independence, Gen. George Armstrong Custer --- underestimating the size of his opposing force and overestimating his own tactical judgments --- had led the 7th U.S. Cavalry into an attack on combined forces of the Lakota, Northern Cheyenne and Arapaho in eastern Montana Territory.

Five of the 7th Cavalry's 12 companies had been annihilated, leaving dead on the field of battle 268 troops, including Custer, two of his brothers, a brother-in-law and a nephew. Six native Crow and Pawnee scouts also were included in the total.

Here's how The Hawkeye reported the story under headlines that reflected the outrage of those who wrote them as well as prevailing attitudes of most white Americans of the time toward native people:

Salt Lake, July 5 --- A special correspondent of the Helena, Montana, Herald writes from Stillwater, Montana, July 2: Muggins Taylor, a scout for General Gibbon, got here last night direct from the Little (Big) Horn river. General Custer found an Indian camp of about two thousand lodges on the Little Horn, and immediately attacked the camp. Custer took five companies and charged the thickest portion of the camp. Nothing is known of the operations of this detachment only as they trace it by the dead. Major Reno commanded the other seven companies and attacked the lower portion of the camp. The Indians poured in a murderous fire from all directions; besides the greater portion fought on horseback. Custer, his two brothers, his nephew and brother-in-law are all killed, and not one of his detachment escaped. Two hundred and seven were buried in one place, and the killed are estimated at three hundred, with only thirty-one wounded.

The Indians surrounded Reno's command, and held them one day in the hills, cut off from water, until Gibbons' command came in sight, when they broke camp in the night and left. The Seventh fought like tigers, and were overcome by sheer brute force. The Indian loss can not be ascertained, as they bore off and cached most of their dead. The remnant of cavalry and Gibbons' command are returned to the mouth of the Little Horn, where a steamboat lies. The Indians got all the arms of the killed soldiers. There were seventeen commissioned officers killed. The whole of the Custer family died at the head of their column. The exact loss is not known, as both the adjutant and sergeant major was killed. The Indian camp was from three to four miles long and was twenty miles up the Little Horn from its mouth. The Indians actually pulled men off their horses in some instances. I give this as Taylor told me, as he was over the field after the battle. The above is confirmed by other letters, which say Custer met with a fearful disaster.

A Times special from Bozeman, Montana, July 3, seven p.m. --- Mr. Taylor, bearer of dispatches from the Little Horn to Fort Ellis, arrived here this evening, and reports the following: A battle was fought on the 25th, thirty or forty miles below the Little Horn. Custer attacked an Indian village of from two thousand five hundred to three thousand warriors on one side, and Col. Reno on the other. Three companies were placed on a hill as a reserve. General Custer and fifteen officers, and every man belonging to the five companies were killed. Reno retreated under the protection of the reserve. The whole number of killed was three hudnred and fifteen. When Gen. Gibbons joined Reno the Indians left. The battle ground looked like a slaughter pen, as it was. Being a narrow ravine the dead were much mutilated. The situation now serious. Gen. Terry arrived at Gibbon's camp on a steamboat and crossed his command over and accompanied it to join Gen. Custer, who knew it was coming before the fight occurred. Lieut Crittenden, son of Gen. Crittenden, was among the killed.

A day later, the Friday morning Hawkeye had little to add so far as information from the battlefield was concerned, but picked up dispatches from other newspapers nationwide that illustrate just how challenging it was to gather information at a time when everything moved more slowly. Several of the dispatches were datelined "Philadelphia," where many luminaries remained after July 4 celebrations in the seat of U.S. independence:

Philadelphia, July 6 --- Regarding the reported killing of Gen. Custer and the massacre of his forces, neither Gen. Sherman nor Gen. Sheridan, both of whom are now in the city, has received any confirmatory information. Gen. Sherman simply says, "I don't believe it, and I don't want to believe it, if I can help it." Gen. Sheridan says he would like very much to disbelieve it, but his fears that it is true are stronger than his hopes that it is not. He said the last heard from the expedition was from Gen. Terry, about the 20th or 21st of June."

Washington, July 6 --- General Custer being a native of Michigan, the congressional delegation from that state, as well as his brother army officers and others, were deeply pained by the report of his death. Hon. T.W. Ferry, president of the senate, who was a warm personal friend of Gen. Custer, visited the war department early, but was informed that no particulars had been received.

Regrettably, we don't know what the reaction to the news from Montana Territory was in Lucas County during July of 1876. Issues of neither The Patriot nor The Leader from those long-ago summer months survive.

Most likely, as elsewhere, the dramatic events of late June 1876 --- and how they were reported --- helped to embed pre-existing prejudices against and perceptions of native people more deeply into white culture of the late 19th and early 20th centuries.

Historians, archaeologists and others continue to interpret and re-interpret the details of the battle itself. Custer's reputation rises and falls.

But no one disputes that the victors at Little Big Horn lost in the end. The Lakota were forced to cede the Black Hills to the United States and, faced with the prospect of starvation, to return to their reservations which, during 1877, were permanently established.