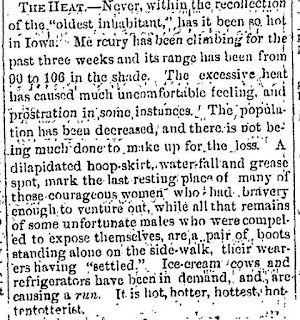 If it's any consolation to those sweltering in the south of Iowa and elsewhere this July 2017, it was pretty darned hot back in July of 1868, too. Chariton Democrat editor John V. Faith described it in his edition of July 25 as "hot, hotter, hottest, hottentotterist."

The complete text of his brief weather report reads, "Never, within the recollection of the 'oldest inhabitant,' has it been so hot in Iowa. Mercury has been climbing for the past three weeks and its range has been from 90 to 106 in the shade. The excessive heat has caused much uncomfortable feeling, and prostration in some instances. The population has been decreased, and there is not being much done to make up for the loss. A dilapidated hoop-skirt, water-fall and grease spot mark the last resting place of many of those courageous women who had bravely enough (sic) to venture out, while all that remains of some unfortunate males who were compelled to expose themselves, are a pair of boots standing alone on the side-walk, their wearers having "settled." Ice-cream cows and refrigerators have been in demand, and are causing a run. It's hot, hotter, hottest, hottentotterist."

The heat, according to John, had resulted in "A Sad Case" near Chariton: "We learn that James H. Berry, living a few miles from town, was so affected by the heat, on Wednesday of last week, as to cause insanity. On Monday morning he was taken, a raving maniac, to Mt. Pleasant. It is believed he will speedily recover."

So be careful out there if you feel heat-related madness approaching this year. The Mount Pleasant Mental Health Institute, opened in 1861, was closed by Gov. Terry Branstad during July of 2015, so no longer is available as a refuge.

Out west of town, Sunday dinner had turned into a nightmare that week because of what probably would be diagnosed today as food poisoning, perhaps heat-related. (Little green worms are unpleasant, but if unnoticed generally are just absorbed and provide a little extra protein):

"A Family Poisoned --- The family of Mr. Blair who lives about two miles west of town, and including Mr. and Mrs. Hynds and daughter, were poisoned on Sunday by something that they ate for dinner. Shortly after eating they were all seized with severe pain in the stomach, accompanied by every symptom of poison. Dr. Collins was promptly called, and when he arrived eight of them were down. He administered the usual remedies, and they recovered in a short time. It is not positively known what it was that contained the poison, but on examination it was found that the peas, of which they had eaten for dinner, contained small worms, and it is thought they were the cause of the sickness."

It didn't take much to set off the contentious Mr. Faith --- he was having a conniption that may or may not have been heat-related that July, increasing the temperature in The Democrat office --- then located in a rented room at the courthouse --- too. James Wilson "Sonny" Ragsdale had recently purchased the rival Republican-oriented Patriot and the war of words had begun:

"EXCUSE US --- 'Sonny,' in the smut-machine, attempts to reply to some things that we said last week by telling us that we lie. We have no language with which to meet arguments of that kind, besides, to quarrel with him would be small business. We have shown to the satisfaction of ourself, and to the readers of both papers, what a fool he is, and decency forbids us to meddle with him any farther. He is too small, too contemptible, to merit further or more respectful notice."

Mr. Faith apparently had a mouth (and pen) somewhat out of proportion to his slight frame, so found it useful, after digesting "Sonny" verbally, to advertise for a fighting surrogate:

"FIGHTING EDITOR WANTED: The editor of this paper, being a small man, and deficient in the fistic art, finds it necessary, in order to sustain the dignity of his profession, to provide every accommodation usually approved by first-class newspaper concerns, and with that view desires to engage a regular fighting editor. The applicant must be able-bodied, capable of vigorously applying a No. 14 boot to that part of the breeches which most frequently needs patching. He will have to deal principally with Radicals (Republicans). No compensation until capacity shall have been established."