Acknowledging the sources of evil .... 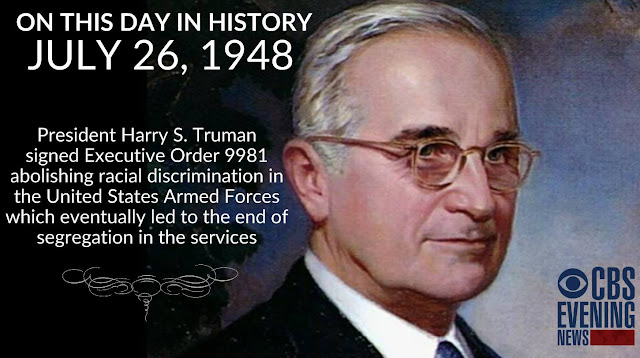 Thanks to CBS News --- and others --- for pointing out that President Trump chose to tweet his executive order banning trans people from the military on July 26, the 69th anniversary of President Harry S. Truman's Executive Order 9981 that led, eventually, to the end of segregation in the U.S. military.

This was not a popular order within the military. Kenneth C. Royall, secretary of the Army, for example, resisted the order until he was forced into retirement during April of the following year. Much of the work instigated by Truman's order actually was carried out during the administration of President Dwight D. Eisenhower.

Those who favored apartheid in the military often cited the tender feelings of white boys from the old South who, it was said, would be adversely affected by close association with folks whose skin was a different color.

The predictable aftermath of the Trump announcement included extreme anger focused on a president who, if past performance is any indication, thrives on drama and discord; and words of support from his base among Evangelicals who view the gentleman at 1600 Pennsylvania Avenue as messiah --- someone who can pick up the lance dropped by that disappointing Jesus, hardly a militant, and carry it forward, skewering everyone they don't like.

The president seems to be a moral vacuum --- a space entirely devoid of matter.  This doesn't mean he isn't evil; only that evil flows into his emptiness from those around him.

Many of our acquaintances, neighbors, even family members --- those who voted for and continue to unreservedly support this peculiar man --- are among the sources of that evil. And I don't quite know how to deal with that.

I do know that the following sentiments expressed Tuesday by the Unitarian Universalist Church of the Larger Fellowship is an appropriately Christian response from within an organization that does not define itself as explicitly Christian:

The president tweeted out today that trans people will no longer be allowed to serve in the military. We don't exactly know how this will play out for the trans folks who are already serving, but there are some things we do know:

Removing thousands of people who are already serving with distinction does not improve battle readiness.

Working with people of different genders doesn't cause disruption  --- firing people for reasons other than lack of ability to do their job causes disruption.

When we break faith with one another, the fabric of society is damaged along with those particular lives.

As Unitarian Univeralists we are called to both affirm and actively support our interconnected lives. We are holding all affected in our hearts, thoughts and prayers as we work to build a world where all find the welcome they deserve.
Posted by Frank D. Myers at 7:10 AM