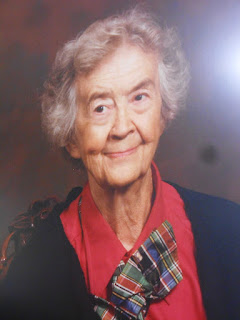 I noticed yesterday that several of us were affirming ourselves by taking an online quiz --- identify the meaning of 10 Latin phrases or words and you're a genius!

Well, hardly that. But for some us who grew up in Lucas County, the quiz brought back memories of a distinguished educator with the superlative name Hortense Guernsey, who taught Latin, world history and Spanish at Chariton High School for four decades.

I was reminded, too, of my friend the late Helen Brown, who established a similar record in the Forest City school system.

Both women began their careers at a time when some knowledge of Latin was considered essential for an educated person and both loved the language, developing innovative strategies to make its study relevant, interesting and entertaining for their students.

Daughter of Ira Guernsey, an educator and school administrator himself, Miss Guernsey was born during 1898, was a 1915 graduate of Chariton High School, received her undergraduate degree from Grinnell College and commenced teaching in Chariton during 1920. She retired in 1960 and after nearly three decades more of community involvement as a "civilian"  died during 1986 at the age of 87.

Rather late in life, just after retirement, she married the widower Ralph Becker and so exited life's stage as Hortense Guernsey Becker.

Miss Guernsey seems to have had the ability to inspire a majority of her students while endearing herself to those for whom inspiration was not possible. In other words, I've never heard an unkind word spoken about her.

I sometimes tell people that I grew up with Hortense Guernsey, but that's stretching the truth a little. I'm a Russell High School graduate and just slightly too young to have been a student of Miss Guernsey's had I been enrolled in the Chariton district.

But both of my parents, who graduated from Chariton High School during the 1930s, were students of Miss Guernsey who remembered her fondly and spoke occasionally of her.

My dad paid Miss Guernsey a farmer's tribute. When presented by one of his dairy cattle with a lovely golden Guernsey heifer calf --- he named her Hortense. She grew into a beautiful and gentle mainstay of the herd; and that's the Hortense Guernsey I grew up with.

John Baldridge, owner and publisher of the Chariton Newspapers for many years, recalled this anecdote regarding Miss Guernsey in a column written during June of 1981:

Hortense as a young teacher in Chariton in days when restrictions on teachers were severe, donned pants and walked around the square smoking a cigarette. She never smoked again, but had made her statement on rights of women decades before affirmative action.

And here's a little story from the front page of The Chariton Leader of Oct. 28, 1952, headlined "Arrested, Interpreted, Freed," that says as much about the somewhat insular nature of Lucas County as it does about the talents of Miss Guernsey:

A Mexican young man was happy that someone in Chariton spoke Spanish Monday.

It seems that a murder had been committed in Sioux City Saturday night and a man, appearing to be either an Indian or Mexican, wearing a sweater and light colored trousers was suspected.

A bulletin was put out on the police radio and Sunday evening a highway patrolman spotted a man answering to the description near Lucas.

He was brought to Chariton and he could not speak English. He was lodged as a county guest until Monday morning when he was taken to Miss Hortense Guernsey at the high school. She is the Spanish instructor in the local schools and he soon made known his identity and his mission in this part of the country. He was immediately freed and sent on his way --- rejoicing that Miss Guernsey could speak and understand Spanish.

And finally, here's another item from a John Baldridge column, this one published on April 4, 1985, and containing the transcript of an article from the Tucson (Arizona) Daily Star that had been given to him by both Patsy Hixenbaugh and Martin Biesemeyer.

The author of the Daily Star item was the late Quinto Leo "Mike" Della Betta, a 1945 Chariton High School graduate who, after World War II service, earned his degree in journalism from the University of Arizona and commenced a distinguished career with the Daily Star that would continue until retirement during 1992:

An excellent reader story --- one of feature interest rather than news value --- appeared in the Feb. 6 Star. The AP account told you that the mayors of  Rome and of modern Carthage, a suburb of Tunis, had finally signed a peace treaty ending the Punic Wars. The last battle between the two ancient powers was fought in 146 BC.

The story quoted the famous remark of Roman senator Marcus Porcius Cato, saying he ended every senate speech with "Delenda est Carthago" --- Carthage must be destroyed.

That line brought back memories of my high school Latin teacher, a tall, queenly woman with the magnificent name of Hortense Guernsey. She knew that I was planning to become a newspaperman, and she gave me an early lesson about quoting sources correctly. She instructed me that "Carthage must be destroyed," although the popular, ringing phrase, wasn't quite exact.

"If I run into you on the street 20 years from now," she would say, "I'll expect you to be able to quote Cato's full statement."

It's been much more than 20 years, but I do remember the full statement: "Ceterum censeo delenda est Carthago."

The "ceterum" is the same word you use when you say "et cetera," and it means something like "in addition." Censeo has roughly the force of "in my opinion." So Cato was actually uttering something like, "By the way, in my view, Carthage must be destroyed. " Not quite a battle cry.