Celebrate Pride --- and be a friend 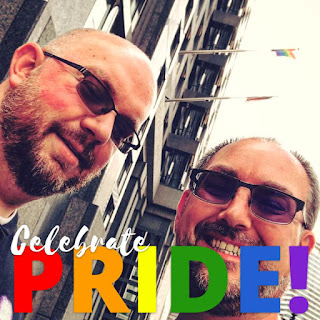 Here it is the first Sunday in Pride Month, cause for both celebration and reflection. So I've borrowed (without asking permission) as an illustration the profile photo posted by a Facebook friend who is the husband of a cousin of mine, two gentlemen in whom I take considerable vicarious pride.

That's part of it --- Leading by example, and these two do.

Pride Month is pegged on the anniversary of the 1969 Stonewall Riots in Manhattan, the tipping point toward freedom and equal rights for an entire class of humanity, marginalized --- even hated --- until strong leaders, thus moved to act, began prodding us out of the shadows and into the light.

We were a little spoiled during the enlightened years of the Obama administration, when the White House issued regular Pride Month proclamations and, upon occasion, was bathed in rainbow colors.

That's not going to happen now; the current administration owes too great a debt to another group of people --- self-identified as Christian but horribly fearful as its sense of entitlement --- based upon the marginalization of others and little else, certainly not the gospel --- erodes.

But Pride celebrations will go on, In Iowa and elsewhere.

Also this morning, an old favorite from 2010 --- a performance of Billy Steinberg's and Tom Kelly's 1986 "True Colors" --- introduced that year by Cyndi Lauper --- by the Gay Men's Chorus of Los Angeles.

This was adopted as something of a theme song by the LGBTQ+ community back in '86, then revitalized during 2010 as the "It Gets Better" campaign gained momentum.

"It Gets Better" was and is a movement designed to reassure gay kids who find themselves in crisis situations that, given time and supportive friends, situations change and --- get better.

We all need that reminder now and then --- LGBTQ+ and Straight+ --- so have a listen, hold onto hope and be a friend.