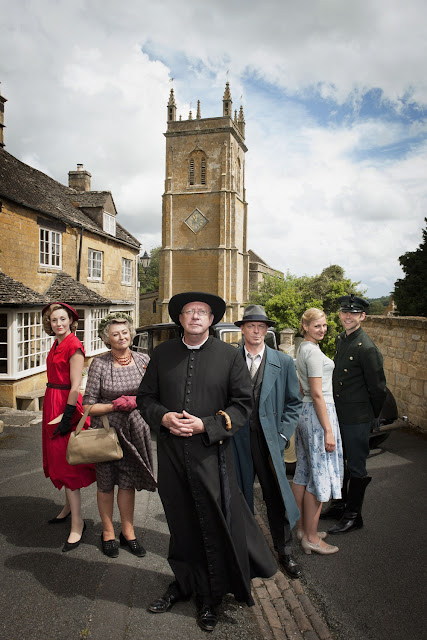 I've been binge watching via Netflix, in spare time, the BBC series "Father Brown," based upon a character created by G.K. Chesterton (1874-1936) whose 21st century exploits stray some distance from the original stories that featured him --- but are entertaining none the less.

The first couple of episodes seemed a little clumsy and it looked like I might be able to resist and get on with life. Then I got hooked. Now I can't stop.

Chesterton, willing to tackle as writer and raconteur nearly any topic, also is the source of a line that seems especially apt now, considering the political situation in the United States: "The whole modern world has divided itself into Conservatives and Progressives. The business of Progressives is to go on making mistakes. The business of the Conservatives is to prevent the mistakes from being corrected."

Father Brown developed, to some extent at least, from Chesterton's own spiritual journey --- from agnosticism through high-church Anglicanism into, during 1922, full communion with the Roman Catholic Church.

I enjoy the settings of the BBC series --- the imaginary Cotswold village of Kembleford where Father Brown holds down the fort at the imaginary St. Mary's Catholic Church.

But it's only fair to point out that there are no bucolic Catholic villages like Kembleford in England, courtesy of Henry VIII and his destructive son, Edward VI, under whom the iconoclasts prospered. Nor are there ancient parish churches in England to serve Catholic communicants.

Most if not all Catholic churches there now date from after the 1829 Catholic Relief Act.

So in reality, St. Mary's Church is the Anglican Church of Sts. Peter and Paul in the Gloucestershire village of Blockley.

Chesterton became an effective apologist for Catholicism and Christianity in general during in his lifetime and as such has been proposed by his namesake Chesterson Society for beatification. No word from the Vatican.

But leave it to those American Episcopalians. We observe a provisional feast day in his honor on June 13. You may wish to jot down the collect developed for that day so you'll be ready:

"O God of earth and altar, who didst give G. K. Chesterton a ready tongue and pen, and inspired him to use them in thy service: Mercifully grant that we may be inspired to witness cheerfully to the hope that is in us; through Jesus Christ our Savior, who livest and reignest with thee and the Holy Spirit, one God, for ever and ever. Amen."
Posted by Frank D. Myers at 6:39 AM