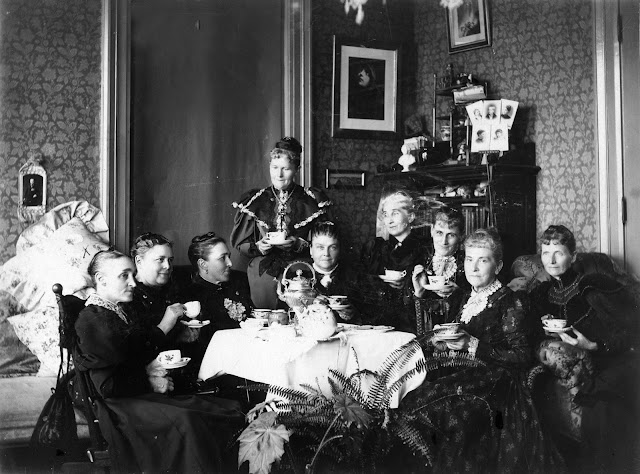 Or "High tea at the Ilion," it might be titled, based on some educated guesswork. But the original identification written on the back of this vintage photo from the Lucas County Historical Society collection was simply "Grandmother Gibbon & Friends." Names written on a slip of paper scotch-taped to the back of the photo identify the women individually --- some with certainty, others with uncertainty.

The donor of the photo in 1978 was the late Louise Johnston Copeland, widow of Lawrence Gibbon Copeland, who was indeed the grandson of Laura R. (Gibbon) Gibbon, the small woman at far left in this photo. Daughter of Leonard and Sarah Gibbon, Laura had married her cousin, Dr. William Henry Gibbon, Civil War surgeon and pioneer Chariton druggist, and they built in the year of his death, 1895, the grand old house that still stands at 216 South Grand. Their only child was Anna (Gibbon) McCollough/Copeland, Lawrence Gibbon Copeland's mother.

There were a total of six Gibbon grandchildren, three by Anna's first marriage, to Ralph McCollough --- Clement, Dorothy (Vaughn) and Henry --- and three by her second husband, Josiah Copeland, whom she married after McCollough's untimely death --- Lawrence Copeland, Anna Laura (Piper) and Katherine (Godman).

I suspect the photo was taken in the southeast parlor at the Ilion, home of Smith H. and Annie Mallory, for a couple of reasons. First of all, Annie is seated in the middle of the group, apparently presiding over the tea service. In addition, the window and door frames as well as their relationship to each other strongly resemble those in the southwest corner of the Ilion's southeast parlor. The ceilings here are extremely high, as were those of the Mallory home (demolished in 1955) and at the top of the photo, more evident in the original than here, is the trace of a chandelier similar to one known to have been in that room. But of course I could be wrong. The photo probably was taken during the 1890s, although it would be difficult to decide exactly when. It may have been taken by Jessie (Mallory) Thayer, Annie's daughter, and an enthusiastic amateur photographer.

I tend to think the woman on Laura Gibbon's left was Margaret McCormick rather than Mrs. Brant. The McCormick sisters, Miss Margaret and Miss Emily, were affluent mainstays in Chariton social circles into the 20th century --- But Miss Margaret was quite stout and Miss Emily, quite lean --- and the woman in question seems to have been rather stout. Miss Margaret was a mainstay of St. Andrew's Episcopal Church and Miss Emily, of First Presbyterian Church. Their large home, at the intersection of South Eighth Street and Woodlawn, just across Eighth west of the old Eikenberry house, was heavily damaged by fire and then demolished in the 1930s and they decamped to California, where all of their nieces and nephews lived, and where they died.

That still leaves the identity of the the third woman from the left in doubt and the fourth woman, certainly not Margaret McCormick, entirely unidentified. Jennie Russell, to Annie Mallory's left, was the wife of the rector emeritus of St. Andrew's Church; Mrs. Stuart, the wife of a pioneer Chariton attorney; Mrs. Underhill, I'm unsure about; and Miss Emily McCormick was Miss Margaret's sister.

If this photo looks familiar, it may be because I used it without much explanation in a December, 2015, post about the St. Andrew's Guild cookbook. Now you know as much about the photo as I do.