Was that Uncle John's body down by Deadmans Run? 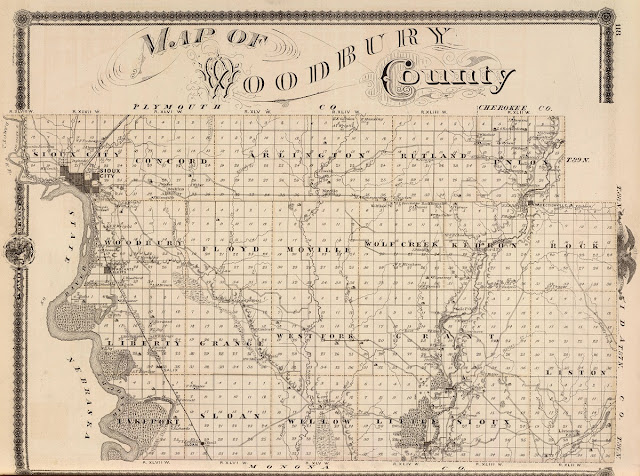 Fair warning --- the most likely answer to that question is, "we'll never know."

The reports and the traditions that form the background to the question date from 1852-1853 and involve a man reportedly from Chariton who died late one of those autumns in northwest Iowa's Woodbury County and whose body may or may not have been found and/or buried along a stream not far from Sergeant Bluff/Sioux City thereafter called Deadmans Run.

The newspaper report I found first was published during mid-December, 1853, in The Council Bluffs Bugle then republished on Dec. 31, 1853, in The Burlington Weekly Telegraph after the editor of the latter publication had received his exchange copy of The Bugle via U.S. Mail --- at that time transported by stage coach on the state road directly through Chariton from the Missouri to the Mississippi River shorelines. There was no local newspaper at all in Lucas County during that year.

Headlined, "From Sargeant Bluffs," the story reads: "From Mr. Townsley who has just arrived from the above place, we learn the following facts: Mr. A. Anderson is thought to be recovering. Great numbers of Sioux are arriving from St. Peters and preparing to make an exterminating attack upon the Omahas. A man called 'Uncle John,' from Chariton, and formerly from Illinois, and connected with Col. Allen's surveying corps, was lost on the prairies on the 15th inst. In going from the camp to the settlement he became lost in his calculation and took a wrong direction. He had with him a horse and buffalo robe, but no food. He was a large heavy made man and his horse was blind in one eye. He was followed in a circuitous zigzag direction out in nearly an easterly direction. He was about forty-five years old. His name was not known."

I went searching for some sort of Woodbury County connection to this story and the best I could do was this excerpt from the Woodbury Township chapter of the 1890-91 "History of the Counties of Woodbury & Plymouth," Chicago: A. Warner & Co. Here's how it reads:

"The origin of the very singular name that has been bestowed upon a small stream which runs through the center of Woodbury township --- Deadmans Run --- is as follows: About 1853 the body of a man was found near the little stream mentioned, or rather, as the best authenticated account gives it, attention was called to the body by one of the party to which the dead man belonged. A party of surveyors was encamped near the stream, and one of them, a young man, whose name was never given, was killed, either accidentally or by design. One of the party went to the settlement at Floyd's Bluff and informed the authorities there, who held an inquest on the corpse where it was found, and buried it on the spot. There was considerable mystery surrounding the affair, and the truth did not leak out till some time afterward, when it was ascertained that the young man who was killed, and his slayer, were lovers of the same young lady, who lived not far from Council Bluffs. They either fought a duel, or got into a quarrel which resulted in the death of one of the men. There was. evidently, nothing underhanded in the affair, as the rest of the party would not do or say anything to criminate the unfortunate slayer."

Then, I found a transcript of a Sioux City Journal article written by Neil Miller and published on June 13, 1940. Headlined "Dead Man's Run." It reads:

"On the night of October 10, 1852, a campfire blazed brightly on the eastern out-skirts of what now is Our Town (Sioux City), as a party of government surveyors rested on the last lap of their long journey from the Little Sioux. The horses were unhitched and tethered some distance from the campfire to graze in the crisp, drying grass. Save for the occasional dismal wail of a coyote, the rolling hills of the Morningside were silent and deserted. To the westward French and Indian neighbors of William Thompson drank whisky and danced weird Indian dances in the double house of August Traversier. At the mouth of Perry creek Joseph Leonais lived snugly in his little log cabin. Farther up the stream Robert Perry brooded over his lonely claim. Out on the mouth of the Sioux river, Theophile Bruguier rested contentedly among his countless Indian relatives and his half-breed children.

"As the members of the surveying party rested around the campfire, the only splotch of brightness in the primeval darkness, two of the men fell to arguing. John Coon was a devout Mormon and presumably had endured much bantering persecution from his co-workers. Ivy Johnson, a husky youth of 20, had been zealous in tormenting him.

"There had been bad blood between the two for some time, and this night Coon became very angry under Johnson's barbed gibes. Only the intervention of other members of the party prevented the quarrel from flaring into a fight.

"In the early morning, after the horses had been harnessed and the train started on its way, Coon attempted to retrieve his gun from one of the moving wagons. It was discharged and the bullet killed Johnson instantly. There seems to have been a reasonable doubt as to Coon's guilt, and he was never brought to trial. Johnson was buried near where he fell, close to where the Milwaukee railroad tracks now skirt the eastern edge of Morningside, at a spot which has since been known as Dead Man's Run."

And finally, here's a reference attributed to the 1852 field notes of surveyor Alex Anderson, then working near Sioux City: "Ivy Johnson, one of my men, was accidentally shot yesterday and died almost instantly." The field notes also reportedly contain the precise location of his grave. (Cazier, Lola, "Surveys and Surveyors in the Public Domain, 1785-1975," Washington, D.C.: U.S. Government Printing Office, 1976. Page 61.)

You've got to admit that this is a pretty good yarn, or maybe even a couple of yarns, told in a variety of ways. And there are elements of truth here, although the time frame varies slightly and the characters are ambiguous. Was "Uncle John" the shooter --- John Coon --- or the victim --- Ivy Johnson --- or neither? Are we dealing with one story here, or two. And if so, are they related. Like I said, we'll most likely never know.
Posted by Frank D. Myers at 6:28 AM