Ruffians, a balloon & death at the Lucas County Fair 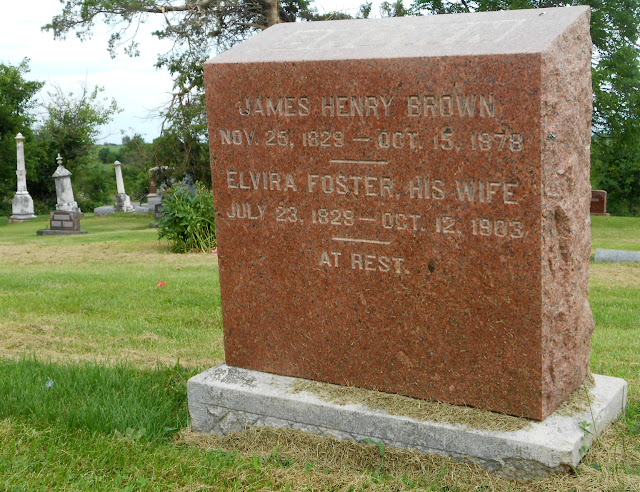 Alas James Henry Brown, worthy English Township pioneer and innocent bystander. Having paid his dime (cost of admission to the fair grounds) and expecting to be entertained, he was struck in the head by a falling timber while awaiting the ascension of a hot-air balloon  at the 1878 Lucas County Fair and, 17 days later, died.

If not the only fair fatality in Lucas County history --- and I can't say for sure that there haven't be others during the 138 years since --- he certainly was the first.

That's his tombstone in Oxford Cemetery, some three miles northeast of Chariton --- a short Sunday afternoon drive. The accident occurred on Friday, Sept. 27, 1878, but the unfortunate Mr. Brown lingered unconscious with a crushed skull for more than two weeks until early Tuesday morning, Oct. 15. He died at the Gardner House hotel, then located at the intersection of streets now named North Main and Roland, diagonally southwest of First Methodist Church.

Just a month short of his 49th birthday, James was survived by nine children and a widow, Elvira (Foster) Brown. The stone that bears both their names appears to have been erected after she joined him in death some 25 years later, on Oct. 12, 1903.

Chariton Leader editor Dan Baker and his crew were back at their office on the square when the accident occurred that long-ago Friday, just ready to put Saturday's edition on the press.

His report of the fair already had been set into type and was locked into the form:

"On Tuesday the county fair at our public fair grounds opened. A respectable number of entries was made in every department and the exhibition of stock was good, the floral department was good. The worst feature of the fair was the wretched weather. Wednesday was wet, cold and disagreeable. Thursday and Friday were clear and cold and many declined going on account of the disagreeable weather.

"An immense crowd visited the fair grounds on Friday, the balloon ascension being one of the principle attractions. A high wind, however, prevailed during the day which rendered the ascent too dangerous for any sane man to take. A great many went away cursing the society roundly because of the failure of the balloonist. The society could not force him to go up and he was not fool enough to break his neck simply to gratify a morbid curiosity."

Then, just before The Leader went to press, someone rushed into the office to report the change in circumstances at the fair grounds, then located in northwest Chariton, and the tragic accident. Dan tore up the form and added this:

"LATER --- Just before going to press, we learn that Prof Melville attempted to make the ascension, that while getting the balloon ready a long pole accidentally fell, striking Mr. Jas. Brown of English township upon the head, crushing in his skull; also breaking a little boy's arm, and injuring Wm. Powers. Mr. Brown was carried to town insensible, but his injures are pronounced fatal.

"The terrible accident put a stop to further attempts to make the ascension, which so enraged a number of cowardly brutal ruffians that they immediately became violent toward the aeronaut and threatened his life, and to cap the climax took possession of his balloon, ropes and material and cut the ropes to pieces with their knives.

"The honest law abiding citizens on the grounds undertook to check the infamous villains in their outrages, but to no purpose, and shameful to relate they were encouraged in their devilish work by some men whose age should have been a guarantee of decency and respectability.

"The baseborn scoundrels and drunken outlaws who perpetrated the outrage are many of them known, and it is to be hoped will meet with their just deserts as soon as possible. Their sole grievance was that they had been swindled out of ten cents by the ascension failing to go off, yet it was announced in the bills as a condition that the ascension would be made (only) if the weather were favorable."

George Ragsdale, preparing his report of the incident for The Patriot of the following Wednesday, had more time to gather his facts and, therefore, offered a few more details:

"Fully two thousand people visited the Fair Grounds on Friday, drawn thither chiefly by the announcement that a balloon ascension would be made on that day. A high wind prevailed all day, and it was evident to many that there would be no ascension unless the wind ceased blowing. After the hour had passed for the ascension the large crowd began to grow impatient, and a few drunken rowdies soon started a howling mob, and it was not long until it was found there would be serious trouble unless the ruffians could be pacified. They were determined Prof. Melville should make the ascension or they would destroy his balloon, and some went so far as to threaten his life. An attempt was made to inflate the balloon, but a heavy piece of timber which was used in holding up the balloon fell in the crowd standing around it and striking Mr. James H. Brown, an old and estimable citizen of English township, on the head crushed his skull in a frightful manner. He was picked up and brought to town, and is at this writing lying at Capt. Gardner's (hotel) at the point of death. In the evening Dr. Simmons, assisted by several other physicians, removed the broken pieces of the skull and dressed his wounds, but no hopes are entertained of his recovery. He has remained in an unconscious condition ever since the accident occurred.

"Like all mobs and rioters the men and boys engaged in this disgraceful affair would not listen to reason, but hooted and howled like madmen whenever any of the officers of the society attempted to say anythinig. Mr. Mallory finally gave them $15 to get them quieted. The bills announcing the ascension stated distinctly that it would not be made unless the weather was favorable. But like all mobs and lawless ruffians nothing would satisfy them and for nearly two hours they kept up their devilish work. It is a shame and disgrace to Lucas county that such a thing should occur within her borders. The brutal wretches cursed the officers of the Society, threatened the life of Prof. Melville, and did succeed in doing considerable damage to the balloon."

"Many of those engaged in this shameful affair are known and they should be arrested and made to suffer for their lawless acts," Ragsdale wrote. "If four or five of the ring leaders had been promptly arrested at the outbreak there would have been not more of it."

After that, the dust settled. No one was arrested and charged. And James Brown, too fragile to be moved home, remained under physicians' and family care at the Gardner House.

On Wednesday, Oct. 16, The Patriot reported: "Mr. J.H. Brown, who was so severely injured on the last day of the Fair, died at the residence of Capt. N.B. Gardner, in this city, where he has been ever since the accident occurred, on Tuesday morning about 5 o'clock. He lived seventeen days after receiving his injuries, most of which time he suffered greatly."

Have you seen the giant help plant at the Chariton Post Office garden?

A wonderful story. I am the great-great grandson of James Henry Brown, and had heard of his unfortunate misadventure before, but never in such great detail. Thanks!