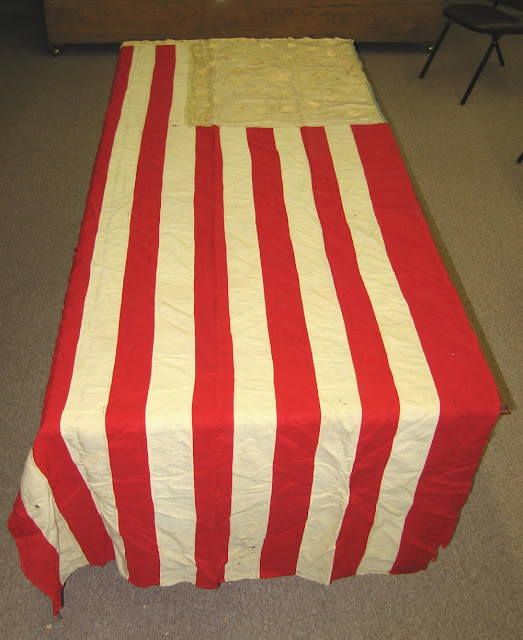 Lucas County's oldest U.S. flag --- hand-sewn some 160 years ago --- and I will head for the Legion Hall early Tuesday to help American Legionnaries and others observe Flag Day, which commemorates the adoption of Old Glory as the flag of the United States by the Second Continental Congress on July 14, 1777.

The Flag Day ceremony will begin at 7:45 a.m. at Veterans Memorial Park, just north of the Legion Hall. There will be a reading --- "Who Was Betsy Ross?" --- and a Betsy Ross flag will be raised. Girl Scouts will lead the Pledge of Allegiance and Boy Scouts will demonstrate the proper way to dispose of an unserviceable U.S. flag.

Before and after the ceremony, I'll be in the Legion Hall quonset with the historical society's ancient Liberty Township flag as well as a couple of others from the collection. All are welcome to attend.

The flag is far too fragile to be displayed permanently, so spends most of its time wrapped in tissue in an archival box. But we do try to air it out once a year and show it off. So this will be a rare opportunity to see it. The red and white stripes remain in remarkably good condition, but the blue silk background for the stars is badly deteriorated.

The Liberty Township flag has been part of the museum collection since 1967, when it was passed on by Lucas County Republican Women. That group knew that it had been hand-sewn prior to 1860 and identified its creators as five women who lived in Liberty Township --- Eliza (Dillman) Sydebotham, Sarah Hollingsworth, Elvira Bidlake, Mary Ferguson and Mary Curtis --- and also knew that it had won a prize as the largest flag carried during a Republican party rally for Abraham Lincoln during 1860.

I came across just recently a story in the June 16, 1901, edition of The Chariton Patriot that tells more of its history. Here we learn that the flag, among the first in Lucas County, had a busy life before it was retired. Here's the article: 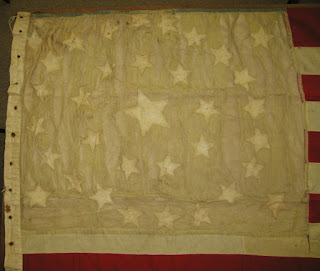 A few days ago we accidentally discovered a choice old relic in the shape of an American Flag now in the possession of Mrs. John Sydebotham, of our city. Over forty years ago some of the young women of Liberty township conceived an idea that Independence Day could be more appropriately celebrated by the aid of a flag. The matter was discussed at some length, and finally Andrew Dillman (first husband of Eliza Sydebotham, died 1866), father of H.C. and G.W. Dillman, agreed to furnish the necessary material if the ladies would make it, to which they readily consented, and on a certain day, the Mesdames Niswender, Bidlake, Ferguson and Dillman met at the home of Mrs. Hollingsworth, and there they cut and sewed all day. This was before the days of a sewing machine in every house, and these patriotic women were compelled to do all the long seams by hand.

The stripes were cut from all wool bunting and the stars of white cambric set in a blue silk field, 31 by 27 inches. Thirty-three small stars were cut out and placed in a circle around one large star. These stars were set on the blue field and then the silk cut from beneath, all the seams being neatly felled as well as those where the stripes were joined. One day's work did not complete the flag, so another day was appointed to meet with Mrs. Dillman, now Mrs. Sydebotham, and there the last stitches were taken in an 8 ft. 9 inch by 3 ft. 9 inch flag.

When the morning of the Glorious Fourth appeared, the Liberty township folks who were patriotically inclined, took this flag and their well filled dinner baskets and climbed into their wagons and carts drawn by oxen, or rode horseback over to Newbern, where they enjoyed a day of the good old times before the war cloud dimmed the horizon.

During the years following, this flag served the citizens of our neighboring township on many occasions, such as political rallys, Fourth of Julys, ratifications, Sunday School picnics, etc. During the days of '61-'65, "Old Glory" was called upon many times to aid the neighborhood in giving expression to their loyalty to our "Sweet Land of Liberty," for these stars and strips are distinguished as being the first flag, and for a long time the only one, in Liberty. When by reason of its worn-out condition it was placed on the retired list, it fell into the care of the present possessor, because of her husband having donated the material.

Mrs. Sydebotham prizes this article very much because of its associations. Of the ladies who made the flag, Mrs. Niswender, now in Oakley, Mrs. Hollingsworth, of Idaho, and Mrs. Sydebotham, of this city, are living. Mrs. Niswender is the mother of the present incumbent (manager) at the poor farm and of Mrs. Mace Wheeler, in Brookdale.