Jesus hates them, this we know ... 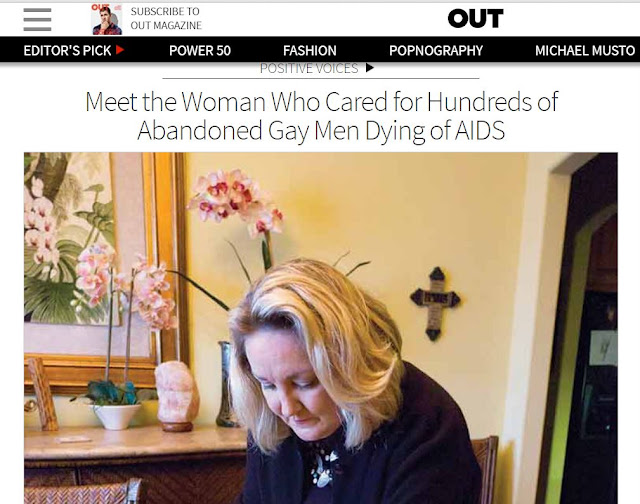 Some days, a guy learns more than he (or she) really wants to know about friends, virtual and otherwise, via the social media.

Among them, those who rise up in the morning and fire off a quick post, perhaps a tweet or two, about how much he or she loves Jesus. Then, the follow-up --- a few shared memes aimed at those who, by implication, Jesus hates as much as these Jesus-loving folks do.

A couple of weeks ago, the usual targets were Muslim, although black folks, gay folks, people with brown skin, the Obamas, Democrats, liberals and more were available to add a little variety. Lately, however, it's been all about transgender people.

I came across a couple of articles the other day that linked formative experiences in another life of mine with the current phenomenon, and thought I'd share. The first, republished in the online version of Out magazine is headlined, "Meet the Woman who cared for Hundreds of Abandoned Gay Men dying of AIDS." The second, written by Sarah Posner and published online at Fusion, entitled "How trans people in bathrooms became the new 'homosexual plague.' "

The story of Ruth Coker Burks, who functioned as a one-woman hospice for men dying of AIDS in Arkansas from 1984 into the mid-1990s, is not exactly new. It was published more than a year ago in the Arkansas Times and has been told in part, or fully, elsewhere, too.

In short, Ms. Burks came upon a young man dying of AIDS during 1984 in a Little Rock hospital who had been abandoned by his Jesus-loving family and soon discovered that there were many more like him. With assistance from the Arkansas gay community, and others, she became a one-woman source of aid and comfort to them. In more than 40 instances, when families declined to claim their bodies, she arranged cremation and burial in her own family cemetery.

Many of us remember those times and that's a factor in generalized distrust --- even contempt --- of and for those who announce their passion for Jesus but fail to follow through by carrying out his directives.

Posner, in her article, suggests that those invested in stirring up the current anti-transgender frenzy are motivated principally by an abiding issue for right-wing Christianity --- the need for a mythic satanic counterforce to rally the troops against. Gay people in general are not working as effectively as that imagined counterforce as we once did, back in the day when Jesus-lovers could be more easily convinced that their gay sons were works of the devil. Gay people in general still are targets, but transgender people, a tiny minority and among the most vulnerable, are the more tempting ones now.