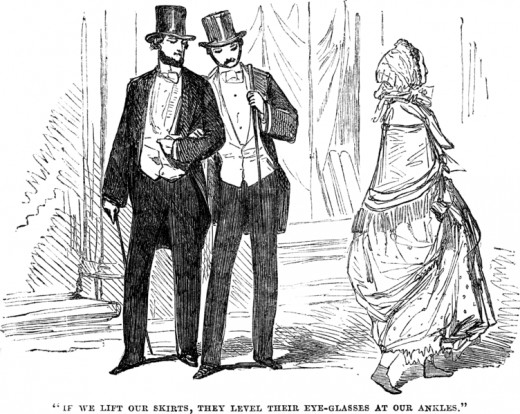 These are a couple of items that turned up on The Chariton Democrat's 1868 local news pages while I was looking for something else last week.

One reflects our ancestors' preoccupation with physical modesty. Women were expected, for example, to keep their ankles out of sight in mixed company unless it was necessary to raise skirts (slightly) to keep them out of mud. The other suggests that lust, directed an ankles and elsewhere, springs eternal --- and sometimes can prove hazardous.

The pressing issue of ankles caught editor John V. Faith's attention just before Christmas, 1868, and he editorialized. Mr. Faith firmly was a firm believer in public shaming when something or someone offended him --- one of the reasons why he found it useful to leave town two years later. Here's his Christmas Eve rant, published in The Democrat of Dec. 24:

SHAME UPON THEM --- It is a subject of frequent remarks, that various persons who lay large claims to respectability are seen to stand upon street corners for the purpose of watching ladies' ankles as they pass, and they will follow them up with that gaze which in the eyes of all respectable persons stamps them as low, obscene, and all that is mean, cowardly and contemptible. These persons are not confined to the unmarried class, and we could name several of them, who have wives and children at home. One of these fellows, who is just now enjoying the absence of his wife, is noted for this peculiarity, and last Sunday he was seen to follow a lady for the distance of half a block, eagerly watching, and when a corner separated them, he walked across the street with his head turned half around watching her. For shame, you miserable low-lived creatures. If we see or hear of such conduct, we shall elevate you to that position where all can see and point you out. They are not gentlemen in character, even through they do dress well.

The second incident, somewhat more shocking than the ankle affair, was reported upon in The Democrat of June 26, 1868, as follows:

SHOOTING AFFRAY --- Just as we go to press we learn that a shooting affair occurred at Freedom, a few miles south of this city, yesterday. It seems that a young man named James Shafer (aged 17) was arrested upon a charge of seduction and compelled to marry a girl, a neighbor's daughter. A man named Even Ward secured the appointment of special constable, for the purpose of arresting Shafer, and after the marriage was over with, an altercation occurred between Ward and Mr. Asa Ryan. it is alleged that somebody else was the real seducer, and that Shafer was victimized to get the matter out of the way. Ryan, it seems, denounced the proceeding and Ward, who seemed to take a personal interest in the affiar, charged Ryan with attempting to impede the course of justice. Words grew severe, and Ward drew a pistol upon Ryan. Ryan sprang at him to seize the pistol, and received the charge in his thigh, making a severe wound. No arrests were made, S.G. Rose, the justice, refusing to issue warrants.

P.S. We have it from another source, that Ryan was one of a party who went there to rescue the prisoner, and that the shooting of Ryan by Ward was in self-defense, and that three of the parties, Asa Ryan, Samuel Ryan, and Ward were arrested, and that Shafer is really the guilty party.

Sadly, there were no follow-up stories in The Democrat, so most likely we'll never know which version of this report --- if either --- was accurate. I can tell you, however, that the venerable Stephen G. Rose most likely was a justice of the peace at Freedom at the time and, further, that the June 26, 1868, marriage of James Shafer and Mary Jane Clark, both age 17, is found in Lucas County records.

Whether this was a shotgun wedding in which an actual gun was involved --- I cannot say.