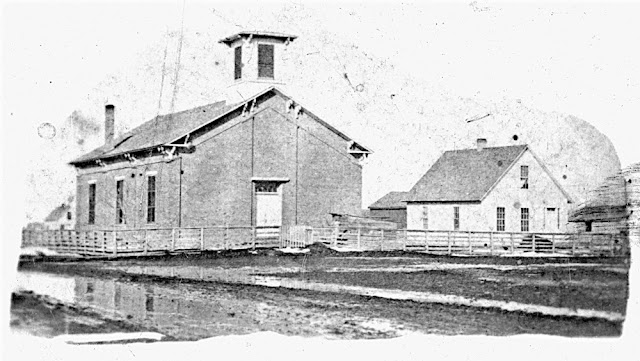 I'd sure like to ask Harriet Hill Parmenter exactly what she meant when, during 1899, she described the Rev. Mr. Palmer, seventh pastor of Chariton's First United Methodist Church (during 1857), as "a regular dude of a preacher." Whatever it was, the young man fresh out of college didn't last long and by the time Harriet and her husband, William Ovid Parmenter, moved to Chariton from Cedar Township later that year, he had been replaced by the Rev. Mr. Crowell.

This is the text of Mrs. Parmenter's annotated list of First Methodist preachers, read from the pulpit on Sunday, June 18, 1899, during the congregation's final service in its 1864 building (above, as originally built), demolished soon thereafter and replaced during the year that followed by the current building. Earlier in the service, a general history of the congregation prepared by Harriet's friend, Ellen Waynick Davis, had been read.

Some of the preachers had not been memorable and merited only a line of type in Harriet's estimation; she had liked and disliked others, and that's obvious; and in some cases, a majority of the congregation seems to have been less than impressed by the Iowa Conference assignment. Whatever, the case, it's a livelier list of clergy than usually is found in congregational histories.

Of the lot, so far as I know only the Rev. Phineas F. Bresee (1866-67) went on to become a generally known historic personage. That occurred many years later, in California, when he became the principal founder of what now is the 2.3-million-member Church of the Nazarene. Here's more about him.

Bresee, even in 1866 and 1867, was a fascinating character. In some areas, he was very progressive. His 1867 invitation to a black preacher from Des Moines to fill the Chariton Methodist pulpit one Sunday caused John V. Faith, Copperhead editor of The Chariton Democrat, to become apoplectic. Bresee was an active campaigner for racial equality and universal suffrage for black citizens.

On the other hand, he could be obsessive about a variety of "sins" --- including use of tobacco, the evils of alcoholic beverages --- and dancing, a social exercise then prevalent in Chariton that seemed to annoy him especially.

1851 --- E.L. Briggs, first year. There are those here today who remember him and commenced to serve the Lord under his preaching. His last work before leaving was to marry Mr. and Mrs. W. P. Davis (Ellen Waynick and William Penn Davis).

1857 --- Rev. Palmer, a young man just from college; and I have been told, a regular dude of a preacher; and only stayed a short time, and the year was filled out by Rev. Crowell. Rev. Crowell, one year, was pastor when we moved to Chariton. He was a very delicate man in health and was from Virginia.

1858 --- Rev. Bussey, one year. Affliction came to them that year. Their married daughter died at their home with consumption. I was present when she died. After the spirit took its flight, we all knelt and Rev. Bussey offered up a prayer.

1862-63 --- Francis H. Reed, two years. He was a very quiet, even-tempered man. I shall never forget the revival meetings he held, and there are others here who will ever thank God for those morning meetings. It also was remarked that no one but Bro. Reed could have held the church together during those two years of the war.

1864-65 --- H.B. Heacock, two years. He was a very devotional man, a good preacher and full of good works; but how times have changed since then. I think they payed Bro. Heacock one year $450, and we gave him a donation and the official board charged it up on his salary.

1866-67. P.F. Bresee, two years. He was a grand preacher and a good pastor, but did not always make his demands and suggestions in as mild a form as some do; for instance: The Sunday School Superintendent was using little tin tobacco boxes for missionary boxes --- one in each class. Bro. Bresee objected, and the result was the superintendent resigned. The superintendent was himself using tobacco. After considering the matter a little while he quit using it and also quit selling it in his store, and never used it after.

One other instance during a revival meeting. Things had not moved to suit Bro. Bresee altogether and just before the close he said wanted the church to sing, "I belong to this band, Hallelujah," and he added, "I don't want any of you sinners to sing it, for you lie every time you sing it, for you don't belong to it."

1868 --- C.R. Pomeroy, one year; Or rather, nine months. We were without a pastor two months, waiting for an imported one from New York. He used to stand when he prayed and the church was quite Methodistic then about kneeling.

1870-71 --- Simpson Guyer, two years. He was a good pastor. I remember one very warm Sunday while he was preaching he took his coat off and preached in his shirt sleeves.

1880-82 --- W.F. Burke, three years. An earnest preacher. During his administration a good many were converted and brought into the church.

1886-87 --- F.W. Bartholomew, two and one-half years. Moved to Chariton in the middle of the year. Most of your know Bro. Bartholomew and his estimable wife.

1888-1891 --- D. Austin, four years. Rev. and Sister Austin did a good work. They were both social and were always ready to help every good cause. I have often heard them say that the years spent in Chariton were very pleasant ones; yet it is true that a preacher cannot please everybody.

1892-1895 --- Rev. A.H. Collins, four years. Bro. Collins was a fine preacher. He gave saint and sinner their portion in due season, and lived what he preached. His third year he built a new parsonage and barn. His last year he and Hugh Smith had a very successful meeting and gathered about 100 into the church, making a total of members, 457. In the four years he received 333. A net gain of 247, which was the largest gain in fifteen previous years. During his last year some seemed to think it would not do to have a preacher stay five years, and he had to move.

1896-98. Rev. G.W. Roderick, two years. He had just entered his third year when he was called from labor to reward. It was a great shock to his many friends. Bro. Roderick was comparatively a young man --- only 43 years of age --- yet he was the first preacher to die during the history of the M.E. church in Chariton while serving it as pastor.

The flock being without a shepherd, the services of Bro. Vollmar were secured. We will write him up later.

Harriet Hill was born June 23, 1833, near Albany, New York, and moved west to Medina, Ohio, with her family when a child. She married William Ovid Parmenter on Feb. 5, 1852, in Medina and three years later the couple moved farther west to a farm in Cedar Township, Lucas County, where they lived until 1857, when they moved to Chariton.

The Civil War disrupted their life in Chariton when William enlisted for service in the 1st Iowa Volunteer Cavalry, but after the war they settled down. They operated a grocery store for a time, but then turned to supplying the city with poultry, eggs, fruit (the Parmenter orchard was legendary), vegetables and --- in season --- bedding plants.

The Parmenters had one child, Josiah William "Billy" Parmenter, who married Jennie Lane and during the late 19th century moved to the vicinity of Grand Junction, Colorado, to raise fruit. During 1904, W.O. and Harriet Parmenter sold out in Chariton and moved west to live in a home built for them on his farm. Harriet died there on June 5, 1911, four months after the couple had celebrated their 59th wedding anniversary. William followed on Feb. 9, 1912. They are buried in Orchard Mesa Cemetery, Grand Junction.