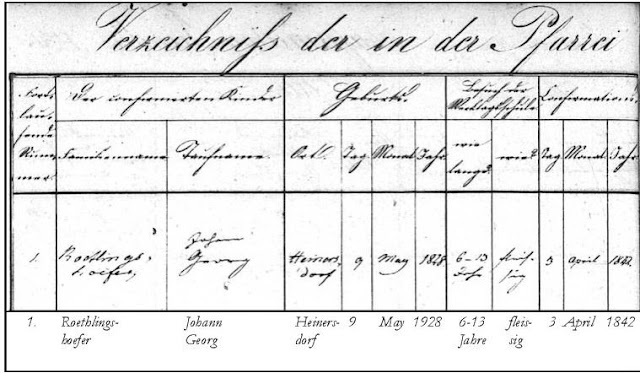 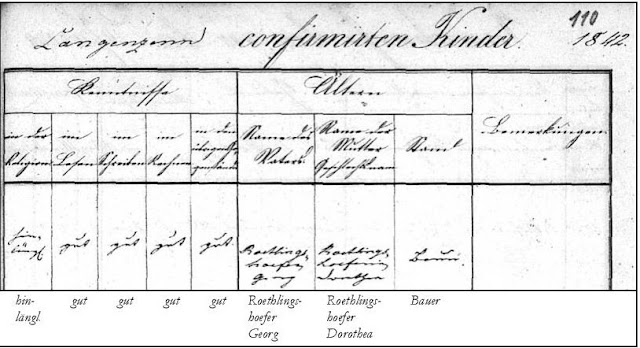 This is another record from the Lutheran parish church of  Langenzenn (in Bavaria) that pertains to my great-great-grandfather, John G. Redlingshafer, forwarded by Werner Gertberg --- to whom I continue to be extremely grateful.

It's the record of John's confirmation at Langenzenn on April 3, 1842, about a month before his 14th birday. The original record runs across a two-page spread in the parish register; I've split it into halves here in the interests of legibility.

As I've written before, Great-great-grandfather and his seven sisters and brothers, ranging in age from 24 to under a year, emigrated with their parents, George and Doratha Redlingshafer, from their native village of Heinersdorf --- in the Langenzenn parish --- to Pennsylvania during late 1848. Siblings Anna Margaret (Redlingshafer) Rosa, John G. and George W. Redlingshafer and Margaret Anna (Redlingshafer) Hupp were Lucas County pioneers.

One thing the record illustrates is the fact that, even in Germany, various people spelled the family name --- which originated in Austria --- in various ways. All of George's and Doratha's children were baptized "Redlingshoefer" and lived most of their adult lives as "Redlingshafer." But John G. was confirmed as "Roethlingshoefer." Spelling was more of a democratic process back in the good old days before we became obsessed with standardization.

The parish priest who filled out the register was called upon to evaluate the quality of Great-great-grandfather's knowledge in various categories. John was characterized as a "diligent" student, academically at least, and his knowledge of reading, writing, mathematics and other subjects was judged to be "good." For better or worse, however, his knowledge in the religion category was declared to be only "sufficient." It may be that he hadn't been paying attention during confirmation class.

Of the four siblings who helped to populate Lucas County's Benton Township, only the eldest, Anna Margaret, still identified as a Lutheran when she died. The others drifted off into other protestant denominations in large part because of a language barrier.

There were plenty of Lutherans in Lucas County, but with few exceptions --- including the Redlingshafers and their neighbors, the Schrecks --- all were Swedish. Their church services were conducted in the Swedish language and in the early days, members generally communicated with each other in Swedish, too. There weren't enough German Lutherans to form a congregation of their own.

So rather than learn a third language in order to go to church the Redlingshafers focused on their English skills and joined English-speaking neighbors to found congregations where services were for the most part conducted in that language.

John G. Redlingshafer and his wife, Isabelle, as well as Anna Margaret Rosa's children, were founding members of the Otterbein United Brethren in Christ. This denomination, which began among German-speaking people, traced its origins to 1767 and a "great meeting" in Lancaster County, Pennsylvania, dominated by Martin Boehm, a Mennonite preacher, and William Otterbein, a German Reformed preacher. So impressed were they with the ecumenical spirit of that meeting that Otterbein famously declared, "Wir sind bruder" --- "We are brethren" --- and a denomination was born, although it took a good many years to get off the ground.

By the time the Otterbein congregation was organized in Lucas County, its meetings were conducted in English --- but it remained popular nationwide with people who had German roots.

Down in Benton Township, on the other side of Wolf Creek, the George W. Redlingshafers and the Hupps became organizing members of Mt. Carmel United Evangelical Church, sometimes also called the "Myers church." This denomination, too, had German roots although by the late 19th century was conducting its worship services and business meetings in English.