I'm extremely grateful this week to Dr. Werner Gertberg who, while researching at the Landeskirchliche Archiv der Evangelischen Landeskirche in Bayern, Nuremberg, recently located records of interest to those of us involved in Lucas County's vast Redlingshafer conspiracy.

The conspiracy already has taken over Chariton via Mayor Roger Manser (descended from Anna Margaret Rosa). Up until a year ago, we were firmly in control at the Lucas County Historical Society via Frank Mitchell (also a Rosa descendent) and Ilene Church and myself, both descended from John George. We're hard to identify since we blend in well, but I suppose there are still a couple hundred of us running around loose here and thousands nationwide. My cousin Rachel Cohen and some of her (our) Dachenbach and Relph relatives got a double dose of Redlingshafer-ness --- they're descended from both John George and Margaret Anna. Although the surnames Redlingshafer and Hupp both have disappeared from Lucas County, several Rosas remain.

Dr. Gertberg, who lives in Moosburg an der Isar, Bavaria, got involved in a certain amount of Redlingshafer family history while researching descendants of Christian Dully and Katharina Fröhlich, whose daughter, Anna Maria, married a more distant cousin of ours, John Redlingshafer, of Tazewell County, Illinois. We've been corresponding off and on for a year or more.

Going into this, I already had an idea that our Redlingshafers originated in the farming village of Heinersdorf, not far west of Nuremberg, based upon records found in Bureau County, Illinois, where two sisters of the Lucas County Redlingshafers settled --- Anna Maria (Banschbach) and Elizabeth Anna (Banschbach). This was the area of Bavaria where the larger Redlingshafer family had begun to settle in 1653 after having been booted out of their native Austria because they were Lutheran rather than Catholic.

Heinersdorf falls within the the Evangelical (Lutheran) Parish of Langenzenn, just to the east, so family information was most likely to be found in reccords of the parish church there, and that proved to be the case. Here's the birth record for my great-great-grandfather: 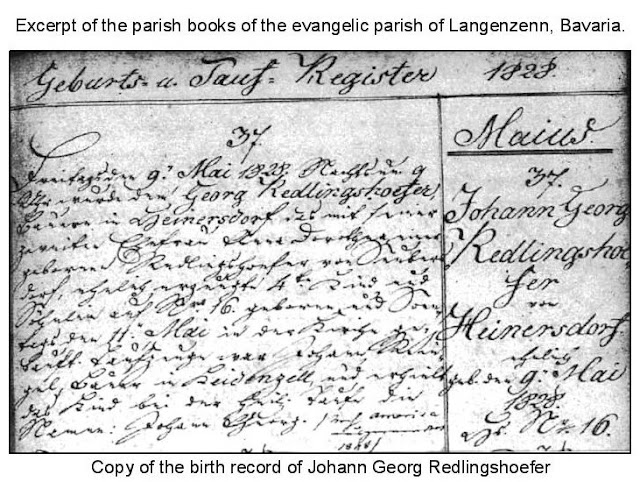 And the translation, also provided by Werner (to say that my German skills are rusty would be to put it mildly) --- No. 37 from Birth & Baptismal Register 1828: "Friday 9 May 1828 at 9 o'clock at night to Georg Redlingshoefer, farmer in Heinersdorf, (and) his second wife, Anna Dorothea, nee Redlingshoefer, from Seubersdorf, (their) 4th child, a son, at (House) Nr. 16, and on Sunday the 11th May at the church of this place baptized. Baptismal sponsor was Johann Reigel, farmer in Keidenzell, and (the child was given) during the sacred baptism the names Johann Georg."

The records tell us a couple of other interesting things. The birth record identifies John George as the fourth child of George and Doratha, suggesting that two other children were born and most likely died during the four-year gap between his birth and that of his older sister, Anna Margaret, born Feb. 28, 1824, in Heinersdorf and baptized Anna Margaretha on Feb. 29 in the Parish Church of Langenzenn.

Also --- the parish marriage register identifies Dorothea as a "virgin" at the time of her marriage to George on July 27, 1823. The fact that Anna Margaret, their first child, was born almost exactly seven months later, on Feb. 28, 1824, makes that seem unlikely.

In addition, the address given in the birth and baptismal register, House No. 16, allows us to locate the family home in the village of Heinersdorf on this early map. The same number on tracts of land scattered around the residential center of the village --- and this is only a small portion of the map --- indicates that they were owned by the Redlingshafers. According to Werner, George and Doratha appear to have been the village's third largest land owners. 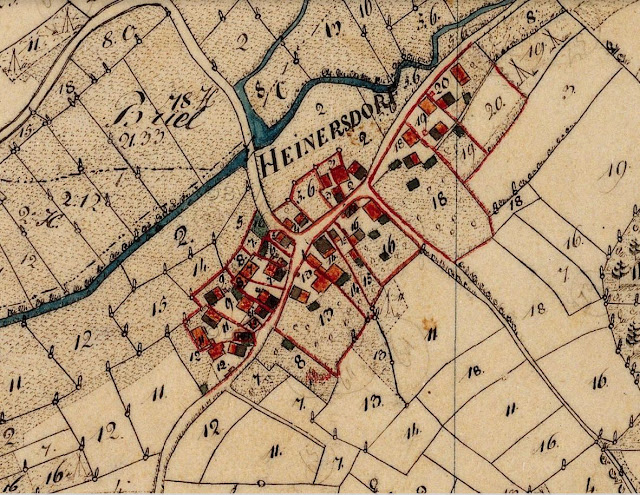 To carry this record further a bit --- George Redlingshafer had three children by his first marriage, Barbara, James and John Kaspar, who came to the United States and settled in western Pennsylvania during the early 1840s. George and Doratha and their eight children followed them to America in 1848. George and Doratha were living in Guttenberg, Clayton County, Iowa, when he died during 1856. Dorotha then came on to Lucas County, where she died in Benton Township during 1881 and was buried in the Salem Cemetery.