Here are two battered postcard views from the Lucas County Historical Society collection of what turned into one of Chariton's largest parades --- held on Armistice Day, Nov. 11, 1921, after transcending organizational nightmares that very nearly scuttled it.

The event had been planned for weeks, organized by a committee that had invited nearly everyone in Lucas County to participate --- patriotic and civic organizations, all of Chariton's schools, all of Lucas County's rural schools, township delegations.

Then, according to a report in The Herald-Patriot of Nov. 17, Armistice Day dawned "the coldest, bleakest day so far in November." The skies were spitting snow and the wind was harsh.

Because hundreds of children were scheduled to participate, the organizing committee had promised to cancel the parade if the weather was bad --- and early on parade day an effort was made to do that.

The only method of instant mass communication at that time involved the telephone. Switchboard operators across the county got busy once the decision to cancel came down making "general calls" --- also sometimes called "line rings" --- notifying everyone who had a telephone and was home or at a place of business to pick it up that the parade would not be held.

As it turned out, this was a parade that refused to be cancelled. Many township delegations and rural school entries already were on the road, floats already were hitched to horses or motorized vehicles and ready to go, Chariton school officials notified the committee that hundreds of students were "rarin' to go" and the Grand Army of the Republic and American Legion boys --- veterans respectively of the Civil War and World War I --- were in uniform and ready to march.

So despite the weather, additional general calls went out and the parade launched more or less as planned, at the 11th hour of the 11th day of the 11th month.

The parade was six blocks long, processing on Grand Street south along the east side of the square down to Armory, west to Main, north to Braden, then right on Braden. Since there was more parade than there was square, a counter-march began at Piper's Corner, reversing the route for lead entries until the entire square was filled with parade participants.

The first postcard view shows the Grand Army of the Republic contingent --- surviving Civil War veterans with their own band --- who led the parade, marching south on Grand. The float immediately behind, pulled by plumed horses, held members of the Womens Relief Corps, the GAR auxiliary.

The second postcard view is of student participants in the parade, led by the Columbus School parent-teacher organization entry. 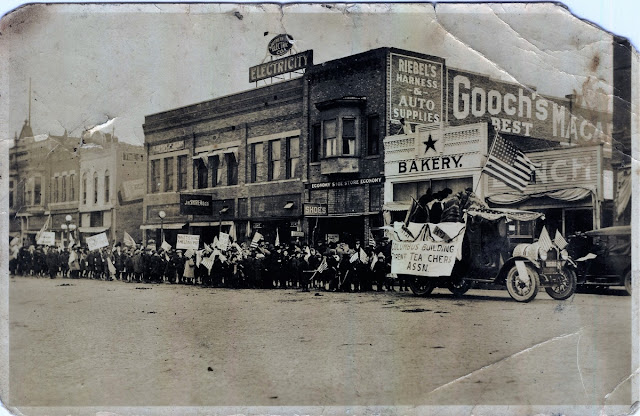 Following the parade, children went back to school and some participants went home --- but hundreds took advantage of meals being served by the women of churches nearest the square. Because it was so cold, the women collectively decided that coffee would be free to all comers. There also was an ongoing benefit at the southside Lincoln Theatre to raise funds to build a new American Legion post home. A late afternoon baseball game (Lacona won) and an evening benefit dance also were held.

A stand had been erected on the courthouse lawn for the afternoon program --- there always was an afternoon program during an event like this. But it was too cold. So the congregation of First Methodist Church opened its doors --- and that's where the program was held, inside the packed building.

Despite the difficulties, all involved pronounced the parade a great success. They just don't make Armistice Days (now Veterans Days) like they used to.