Will it be New York, Harvard, or neither? 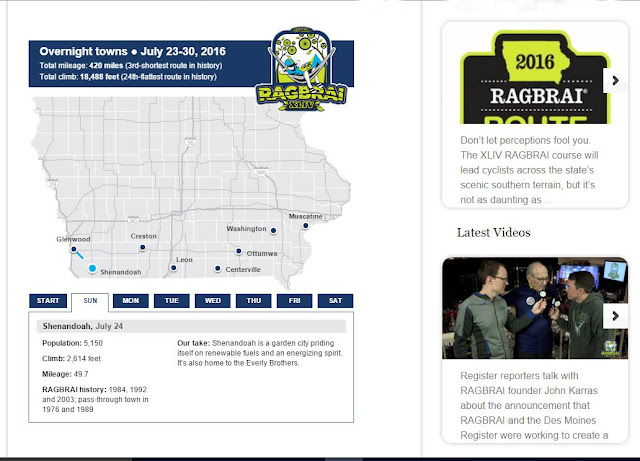 A south-of-Iowa route for this year's Register's Annual Great Bike Ride Across Iowa (RAGBRAI) was announced over the weekend. This will be the 44th year thousands of people from all over the world have gotten together during July to ride bicycles across the state --- from the Missouri to the Mississippi rivers.

Chariton has hosted the multitude overnight twice during those years, but this year's route cuts across our neighbor to the south, Wayne County. After launching in Glenwood, overnight stops are planned in Shenandoah, Creston, Leon and Centerville before wheels turn northeasterly through Ottumwa and Washington to be dipped in the Mississippi at Muscatine.

So I've been amusing myself this morning trying to figure out how the multitudes are going to get themselves across Wayne County (detailed route maps haven't been released yet).

RAGBRAI organizers avoid state and federal highways as much as possible and generally stick to paved county roads. Trouble is, there is no paved county route from Leon to Centerville all the way across Wayne County no matter which way you go.

I'm putting my money on the southerly route --- from Leon down to Lineville, then up through Clio and Allerton to No. 2, east through Corydon, then south again and east through Harvard, Seymour and Numa to Centerville.

On the other hand, there's the northern route --- from Leon up to Garden Grove and Humeston, then eastward through Cambria, Millerton, New York, Bethlehem and Confidence, then along the south shore of Lake Rathbun to Rathbun, perhaps, then in to Centerville from the north.

Whatever the route, RAGBRAI is a great event for Iowa --- and this year for many southern counties again. I'll be anxious to see if those cyclists are channeled through Harvard --- or New York. Or neither.
Posted by Frank D. Myers at 6:40 AM

I'm of course pulling for the northern route across the county through Cambria, Millerton, New York, and Bethlehem, as that will pass close to our old home farm near Bethlehem in Union Township. (Plus, that's one of the farm-to-market roads that were paved back when I was in college and worked summers with the County Engineer survey crews, as a paving inspector while the paving jobs were going on. Also the pavements from Confidence down to Promise City and from Highway 2 down through Harvard to Sewal. So I always feel a sort of personal connection with those pavements whenever we're back in the neighborhood.)