Snowzilla, the caucus monster & other stuff 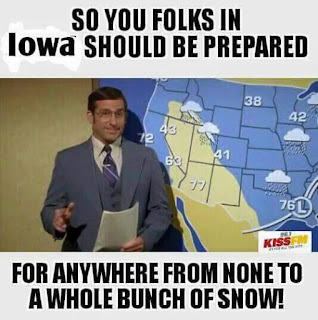 I'm giving Harry Hemphill, aka "Huntress," the day off --- or rather myself the day off, and will come back to finish that multi-day saga tomorrow. It takes a good deal of time to feed this Blogspot beast, you know, and I was otherwise occupied much of yesterday.

Besides, my feet hurt. That's a factor of wearing my favorite pair of shoes in the whole world ---  worn out after many years of use and beyond repair --- while helping move mountains of stuff around Thursday and Friday at the museum. We're emptying one of the biggest galleries, the library and a storeroom so that walls can be painted and new carpet installed. More about that next week, too.

Today, I'll have to buy bread and milk in anticipation of Snowzilla --- this morning's National Weather Service map shows a sickly green "blizzard watch" over all but the southeast corner of Iowa. If current predictions hold, we might receive 4-6 inches here on Tuesday, much more or much less, on what for the time being is the edge of the beast. Everything could change, however --- one reason why we spend so much time talking about the weather here.

This is also a good time to acknowledge the unexpected passing a week ago today in Des Moines of Kirk Blunck, a mere child at age 62, highly talented architect and giant in the Iowa preservation field. He was a pioneer in revitalization of Des Moines' East Village neighborhood and had hand a hand in many signature preservation efforts elsewhere in the state, including Chariton's Hotel Charitone, the pheonix-like rise from the ashes of Burlington's spectacular First United Methodist Church and creative renewal and repurposing of Stuart's fire-devastated All Saints Church.

The caucus monster also will breathe its last (for this election cycle at least) across Iowa Monday night --- just ahead (hopefully) of the big snowstorm. I'll be caucusing for Hillary, of course --- and can't imagine why anyone would caucus for someone else. Highly qualified, strong, experienced, creative and besides, I'm looking forward to having Bill Clinton as "first lady."

After that, all the politicians and their campaign staffers will move hurriedly to the next stop on the campaign trail and we'll have a little peace here in the heartland --- for a time.

Actually, I like the caucus season. You can't believe anything any of the candidates say, of course, but you do get a good idea of their characters, and that's useful.