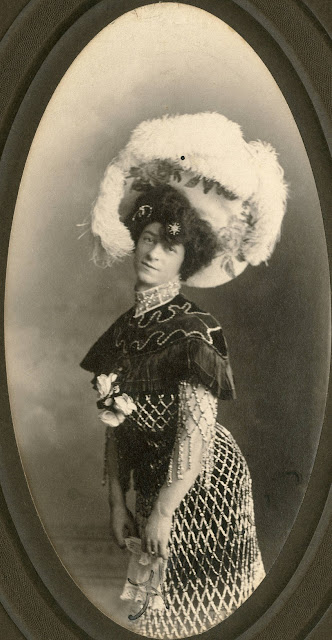 Harry Hemphill, highly acclaimed after 13 years on the vaudeville circuit as what his hometown newspapers described sometimes as a "lady impersonator," was 31 when this photo was taken during 1907 at Maxwell Studio in Mt. Ayr. Quite likely, Harry, who performed as Huntress, had sewn the costume himself --- he had learned the art of dress-making at his mother's knee.

The photo is from the J. Willis Sayre collection of theatrical photographs, housed at University of Washington Libraries, and the only image of this fascinating and almost forgotten guy I've found --- other than images on newspaper microfilm that do not reproduce well.

Harry's act was constantly evolving, from 1894 until retirement from the stage during 1916-17, but here's a snapshot in words, taken by a reporter for The Chariton Herald, when Huntress --- home to spend the holidays with his mother --- and his friends packed the Mallory Opera Hall during early January, 1903, for a performance to benefit the Royal Neighbors of America piano fund. A "North Dakota blizzard that was howling through every key hole and crevice" of the venerable building had not deterred the appreciative crowd.

"The impersonations of Mr. Hemphill were especially clever," the reporter wrote, "but the star performances of the evening were his drapery dances upon a large rolling globe, accompanied by beautiful electrical effects. This feat was certainly a most remarkable achievement and exhibited great skill and training in this line, in which he ranks high as an artist. The numerous costumes worn by Mr. Hemphill in his various acts, were designed and made by himself, and his art needle-work is another source of wonder to his friends. The white silk gown worn during the last act upon the globe contained about a hundred yards, and was made especially for this occasion."

This was relatively early in Harry's career and as the years passed, the Huntress act grew more complex, his costumes more elaborate, his retinue larger --- and he traveled across the country with his own rail car filled with costumes, props and scenery, even spent nearly a year performing in top venues in Australia and New Zealand.

I suppose some might have dismissed Harry as a "sissy," but this was one highly talented, very strong and determined young man.

Harry was the son of a blacksmith and a dress-maker, born on June 19, 1876, less than two years after the Oct. 18, 1874 marriage of his parents --- William H. Hemphill and Elizabeth Rush --- in Chariton. His only sibling, sister Maude, came along a couple of years later.

He grew up in the family cottage, just west of the square on Braden Avenue, but ended his formal education after just eight years in the Chariton schools, going to work at age 13 or 14 as a printer's devil, then apprentice, at The Chariton Patriot. The Patriot staff remained his friends and enthusiastic supporters as the years passed, following his career in considerable detail.

There were early signs, however, of the young man's more artistic talents and aspirations. During August of 1893, for example, The Patriot reported that Harry had "entertained about 20 of his friends to a masquerade party last evening." By early 1904, he had helped to organize the Chariton String Band, seven or eight young men --- including Mortimer Wilson who would go on to earn considerable musical acclaim himself --- who performed at various functions around town --- including a March social sponsored by the ladies of the United Presbyterian Church.

During June of that year, the band performed to considerable acclaim before guests at the Mallory estate, Ilion, and also during a party at the home of Col. and Mrs. Bartholomew and pronounced themselves ready to "furnish music for parties, dances and all social events. The people of Chariton should remember the boys when first class music is desired."

During October, Chariton hosted a district convention of the Womens Relief Corps --- auxiliary of the Grand Army of the Republic --- and Harry and his friend, Walter Smith --- on guitar and violin respectively --- were on hand to accompany the talented Katie Swett as she entertained during the grand finale, the "camp fire" (neither fire nor a camp was involved). They accompanied Katie again during a "literary entertainment" during November at the Methodist church.

On December 20, 1894, the Patriot announced that "Mr. Harry Hemphill, who has been a faithful and efficient employee in the Patriot office for the past four years, severed his connection Saturday night and bade adieu to his many friends for a few months absence in the northern part of the state."

Harry had secured a position with a vaudeville troupe then touring in north Iowa and was off and running, or in this case dancing.