Huntress 4: A murder in the family 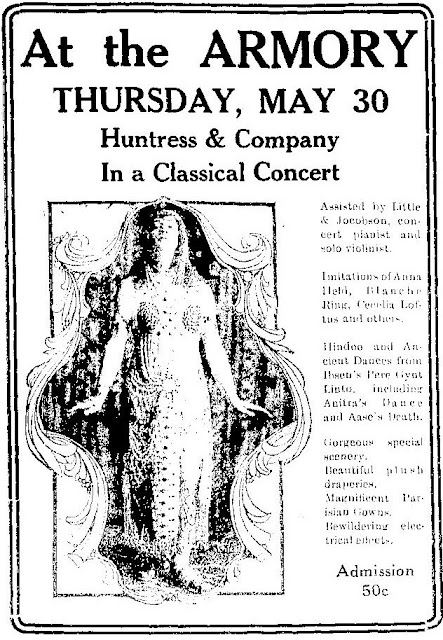 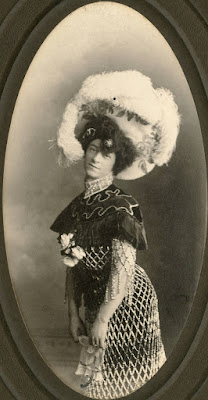 This is the fourth in a series of six posts about Chariton's Harry Hemphill, a star of the vaudeville stage who performed from 1894 until 1916-17 as "Huntress," musician, dancer and female impersonator extraordinaire. When the last post ended, Harry was nearing the end of a 1911 summer break in Chariton that had included a five-day engagement at the Temple Theatre and extensive remodeling of the family cottage on West Braden Avenue. The photo at left was taken during 1907, when Harry was at the mid-point of his dancing career.

Harry was packing his trunks and preparing to head for Chicago to begin a new vaudeville season during early August of 1911 when a family tragedy delayed his departure.

A telegram arrived at the Hemphill bungalow on Saturday, Aug. 5, informing Harry and his mother, Elizabeth, that Willard A. Rush, Harry's uncle and Elizabeth's baby brother --- at 32 actually three years younger than Harry --- had been shot to death the previous day by his wife in the depot at Sheffield in northern Iowa.

The remains were to be shipped to Chariton for funeral services at the Methodist Church and burial in the Chariton Cemetery beside his mother, Rebecca (Scott) Rush-Croft. Harry and Elizabeth agreed to open their newly renovated bungalow on West Braden to receive the remains and serve as site for a wake --- hardly the type of joyous occasion that Harry preferred.

Elizabeth Hemphill and Willard Rush were the eldest and youngest children, respectively, of Artemus and Rebecca Rush, who arrived in Chariton with their older children during 1865. Elizabeth was some 20 years older than Willard, born in Chariton.

Willard had grown up in Chariton and Leon, where the Rush family was living when Artemus and Rebecca divorced, and he had gone to work as a station agent for the Rock Island Railroad, supervising operations in Leroy and then in Cambria, where he had by most accounts been a very popular young man. During 1902, he married Aletha Clay, of New Virginia. The couple moved to Sheffield during 1909, when Willard took charge of the Rock Island depot there.

There were no witnesses to the shooting death, but testimony during Aletha's murder trail in October of 1911 confirmed that she had purchased a pistol during the week preceding after becoming convinced that her husband was carrying on with another woman, Miss Lulu Warner, an employee of the Sheffield telephone exchange.

When Willard's body was discovered, it was found to be lying across a stove poker on the floor of the depot and Aletha entered a plea of self-defense, alleging that he had threatened her with the poker during an argument. The prosecution argued that, unless the poker had been placed there after his death, he was using it to defend himself against Aletha and her pistol.

Newspaper reports suggest that public sentiment in the south of Iowa favored Willard, but the Methodist Church in Sheffield --- which posted Aletha's bond --- and others were solidly in her camp. A surprise witness testified late during the trial that Willard had threatened Aletha previously, but prosecution witnesses countered that Willard had feared for his life, alleging that his wife had become unstable, during the weeks preceding his death. Miss Warner stoutly denied that her relationship with Willard had involved anything other than flirting.

Whatever the case may have been, a Franklin County jury found Aletha "not guilty" during October --- although her attempts to collect life insurance due her under circumstances of ordinary death were fruitless. One of Harry's brother did collect the proceeds from a smaller policy, but none of it was used to buy Willard a tombstone and so his grave in Chariton remains unmarked.

Once this family crisis had settled down, Harry departed Chariton for Chicago during late August to begin a new season and spent the balance of the year and the opening months of 1912 touring larger cities of the upper Midwest. He did, however, return to Chariton for a brief visit during November of 1911 to spend Thanksgiving with his mother.

Harry returned to Chariton during May of 1912 --- this time bringing all of his sets, scenery, costumes, props and equipment along. By now, all of this filled an entire rail car.

A grand benefit performance, this one for the Fraternal Order of Eagles, was scheduled for Thursday evening, May 30, at the Armory. Because no stage in Chariton was large enough to hold his full act, the Armory stage was enlarged to 40 by 26 feet for the occasion. Here's a brief review of the performance, from The Herald-Patriot:

Chariton was pleased to greet one of her young men, Harry Hemphill, in his role as "Huntress," at the head of his own concert company at the Armory Theatre last Thursday evening. Harry has been gradually advancing in his profession, that of feminine interprersonation and interpretive dancing until now he stands among the foremost in the profession. His work Thursday evening was the first time he has ever given his full production in Chariton, he having fitted up an enlarged stage at the Armory to accommodate all of his car-load of scenery and fixtures, and the effect was at once pleasing and thrilling to his large audience.

Some of his impersonations had been given by him here before but his drapery dances had never been seen in full, and the effects of his scenery and elaborate stage draperies, in combination with the work of his spot light artist, gave effects more beautiful than anything of the kind ever before seen or even attempted in Chariton. The interpretive dances from the Peer Gynt suite were something new here, and proved not only very pretty, but instructive as well.

Huntress was ably assisted in his concert by two of the finest artists who have ever played in Chariton, Carl Jacobson on the violin and C.H. Little on the piano. Both are but young men yet are virtuosos in their work.

The entertainment proved so pleasing that it was repeated on Friday evening for the benfit of many who were unable to be present on Thursday evening on account of other social engagements.

A few days later, Harry departed Chariton to resume his season --- his last in the Midwest for a few years. The year 1913 would see him performing primarily on the West Coast, then in Australia and New Zealand.