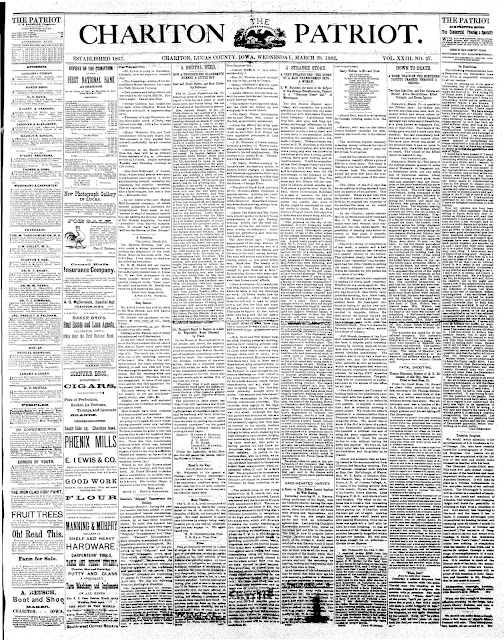 This post continues and concludes yesterday's, entitled "The curious case of Ellen/Edgar Burnham (Part 1)." To summarize, Edgar Wales Burnham was born during 1841 in Vermont to Dr. Milo L. and Ellen Burnham with what we probably would call today an "intersex" body, ambiguously defined in some manner rather than clearly defined as female or male. Presumed as an infant to be female, he presented himself as Ellen M. Burnham until after an 1860 marriage to L.W. Powell, then transitioned into Edward Wales Burnham while living in Chicago during 1862. The Powells were divorced and Edgar returned to the family home in Brodhead, Wisconsin, during 1863. In 1864, the Burnhams relocated to Waterloo, Iowa. Edgar's story entered the public arena during 1868 when Wisconsin newspaper reports detailing his experience were republished widely across the Midwest, including on the front page of The Chariton Democrat.

Dr. Milo L. and Ellen Burnham and their sons, Edgar W. (formerly Ellen M.) and Justus, moved from Brodhead, Wisconsin, to Waterloo, Iowa, ca 1864. Dr. Burnham, as he had in Brodhead, opened a drug store and established a medical practice. The sons were employed in the store.

This was an affluent family in both Wisconsin and Iowa. One sign of this was the fact that Edgar brought to Waterloo with him from Brodhead the first pipe organ to enter the city. A very talented musician, Edgar had commissioned the organ --- an 8-stop instrument in a 9-foot case with gilded front pipes --- from the firm Henry Pilcher's Sons (Opus 77) during 1863. Upon arrival in Waterloo, the instrument was installed in First Congregational Church, the Burnham church, where Edgar both performed as organist and used it for teaching purposes.

As the years passed, Edgar withdrew from the family retail operation and increasingly focused on his music. He had married as his second spouse most likely before arrival in Waterloo Gertrude Everett, also a talented musician who specialized in voice.

Edgar taught, performed, conducted, served as church organist and eventually organized the Iowa State Conservatory of Music. He also joined the staff of the Iowa Normal School in nearby Cedar Falls, now the University of Northern Iowa, as a professor of music.

During 1877, Milo L. Burnham built the Burnham Opera House at the intersection of Park and Commerical streets in Waterloo. This was a three-story building with a first-floor auditorium capable of seating 900-1,000 people and one of the largest stages in Iowa at the time. The second floor contained living quarters and rooms used by Edgar's Conservatory of Music. estimated to have served 100 or more students at a time. The third floor also contained conservatory rooms, but was leased in whole or in part at various times by Waterloo fraternal organizations.

Edgar added management of the performance venue to his jobs, and also organized and conducted entertainment events.

Tragedy struck the family on July 9, 1878, when son and brother Justus A. Burnham died at age 31 in Chicago. Justus had married Linnie Rathbun of Ohio during 1875 and moved to Chicago in 1876 where he lived with his wife and a son.

He was found unconscious on a sidewalk in an unfamiliar part of Chicago during the early morning of July 9 and died a few hours later. The coronor ruled that death was caused by a concussion resulting from the fall to the sidewalk, but a variety of issues surrounding the death were not resolved. Among the complications --- those who found Justus unconscious assumed that he was intoxicated and so he received no medical attention. The remains were brought to Fairview Cemetery in Waterloo for burial.

During the early 1880s, Edgar also organized  and managed a semi-professional troupe of performers that toured widely in the Midwest as, among other names, Burnham's Novelty Company. Gertrude Burnham was among the performers; Edgar, the manager.

Unfortunately for Edgar and Gertrude, while performing in the Twin Cities, they caught the eye of someone affiliated with the St. Paul Pioneer-Press who recalled the sensational story of 1868.

The Pioneer-Press resurrected the 1868 story, recast and republished it --- with no new information other than barbs aimed at the Burnhams and their cast of performers --- in its edition of March 11, 1882. That story was picked up and republished nationwide.

The story appeared on Page 1 of The Chariton Patriot of March 29, 1882, after The Patriot editor picked it up from The Des Moines Register.

It's not clear what impact this new round of publicity had on the Burnhams, nor do I know if the story was published in Waterloo. But the touring company folded and later in 1882, Milo L. and Ellen Burnham bought a home in Chicago, moved there and left Waterloo behind.

Edgar and Gertrude remained in Waterloo for three more years. Gertrude found a job in the Waterloo Post Office and Edgar continued to perform --- including as organist at First Baptist Church --- and manage the opera house, making improvements to it.

There may have been difficulties involving the Burnhams' church, First Congregational. Some years earlier, Edgar had sold the small pipe organ he brought to Waterloo in 1863 to a church in Independence and replaced it with a much larger pipe organ, leased to the congregation but also used as a teaching instrument. In 1883, he offered to sell the instrument to the congregation, but the church declined. As a result, he sold it for roughly three times the original asking price to First Presbyterian Church of Sioux City.

In 1885, the opera house was sold to L.C. Goodwin of Marshalltown and Edgar and Gertrude moved to Chicago, too. The opera house burned 30 years later, on Oct. 7, 1906.

It's not clear what Edgar did for a living during the remainder of his life, although his 1918 death certificate identifies him as a retired organ salesman, so he may well have entered the music industry sales field. I'm guessing that he continued to teach and perform, although I've not done the research that might confirm that.

Edgar and Gertrude relocated from Chicago to San Diego, California, during the late 1880s and Gertrude died there at age 44 on Feb. 5, 1891. Edgar erected a graceful tombstone in the shape of a large urn to mark her grave in San Diego's Mount Hope Cemetery.

Edgar seems to have returned to Chicago to live prior to the death of his father, Milo, on Feb. 14, 1893. His remains were returned to Fairview Cemetery in Waterloo for burial beside Justus and a substantial tombstone was erected to mark both their graves. Six years later, Edgar brought his mother's ashes from Chicago for burial, too, although her grave is unmarked.

It's not clear where or exactly when Edgar married his third spouse, Teresa Mary (Ryan) Sloan, a native of Dublin with three children who, if not adopted by Edgar, took his surname --- Dorothy, Kathleen and Malcolm. I tend to think the marriage occurred in San Diego about 1892 and that Teresa and her children accompanied him back to Chicago to make their home.

It's not clear what became of Edgar's remains. He had directed cremation and asked that his ashes be returned to Waterloo for burial with his parents and brother at Fairview. The death certificates of both Edgar and Teresa state, however, that they were buried at Chicago's Oak Woods Cemetery. If Edgar's ashes were indeed buried at Fairview, there is no indication of it.

Here's the brief obituary published on May 10, 1918, in The Waterloo Times-Tribune:

E.W. Burnham died at Chicago a few days ago. World of his death was received here by Ashley Dunham, fire chief. Mr. Burnham requested that his body be cremated and the ashes placed in the family lot in a Waterloo cemetery. Chief Dunham was requested to locate the lot and make arrangements for the disposition of the remains.

The deceased was E.W. Burnham, a former Waterloo resident, and the son of Dr. M.L. and Ellen Burnham, who were pioneers of this city. Their bodies rest in Fairview and a brother, Gustus (sic, Justus), was also buried in the family lot.

The deceased was proprietor of a drug store in West Waterloo in the 70's. After conducting this business for a time he established a conservatory of music. He built Waterloo's first opera house in 1877. This stood at the corner of Park avenue and Commercial street and was destroyed by fire in 1906. The Citizens' Gas company now occupies the lot.

In the 80's he moved to California where his wife, Gertie, died. He then went to Chicago to make his home. There he remarried.

As obituaries go, it's not much --- and I've ironed out a couple of errors in the original, one of which identified Chief Dunham as Edgar's son-in-law because whichever staffer recast a death notice from an earlier edition of The Waterloo Courier failed to actually read it.

But all in all, the hometown newspapers treated Edgar better in death than others had done upon occasion in life.

Someone suggested in a comment elsewhere to yesterday's post that this was kind of a tragic story, but I don't see it that way.

Edgar was born with the cards stacked against him physically, but he seems to have lived honestly, given full expression to his formidable talents, received support from his family and others who loved him, persevered, prevailed over adversity and lived long and well. Who could ask for more?