The puzzles of William E. Hollensleben 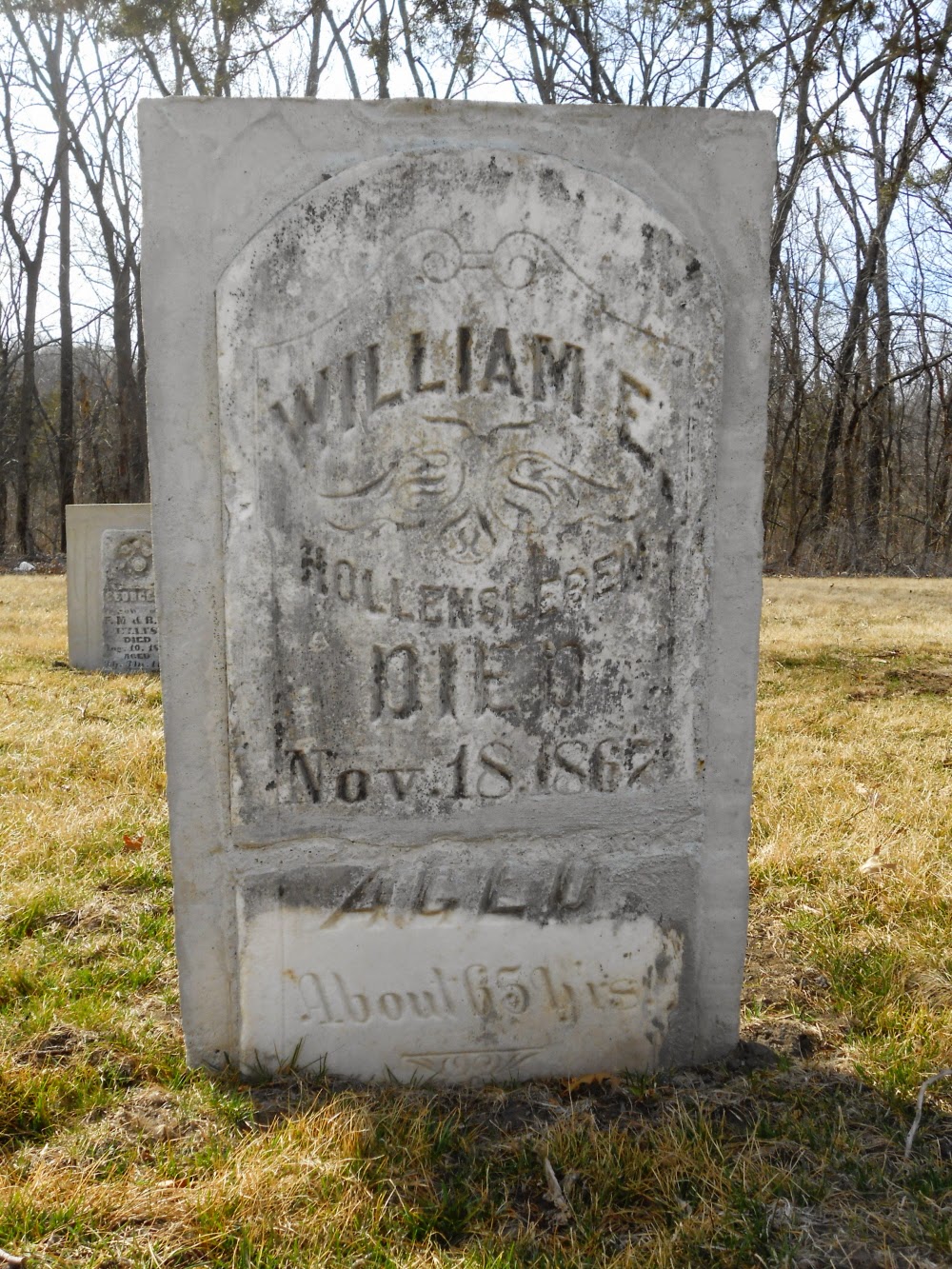 William E. Hollensleben's ancient (by Lucas County standards) tombstone in Potters Field snapped near its base many years ago and fell over backwards. Now it's been reassembled in a slab of concrete, part of ongoing repairs to damaged stones in the Chariton Cemetery, stood upright --- and has pride of place in its neighborhood again.

We still know next to nothing about William and how he came to be here, but I did stumble upon a new piece of information over the weekend that throws a little more light on this stranger among us.

That's what a potters field is for, you know --- a burial place for strangers. It's an ancient designation, taken from the 27th chapter of the Gospel according to Matthew. In vs. 3-8, the writer describes Judas returning the 30 pieces of silver --- blood money. Uncertain about what to do with the coins, the chief priests "took counsel, and bought with them the potter's field, to bury strangers in."

There are about 175 people buried here, a majority in unmarked graves. This part of the cemetery was set aside about 1863, when it was established, for those who had no money and were buried for the most part at county expense. It's also known as "public ground" and, occasionally, as the "south cemetery."

In 1863, its location was remote --- a considerable distance from paying guests then far to the north and east. As the years have passed, however, the cemetery has expanded to surround this pretty area with woods over the fence to the west and a southerly view of the Chariton River valley.

A dozen or more stockholders funded the cemetery, intended to replace two earlier pioneer burial grounds, but by the late 19th century the Stanton family had assumed exclusive ownership. Dr. J.E. Stanton stated in 1902 that 76 people had been buried in Potters Field by that time, although the records he used to come up with that number have vanished. Approximately 100 graves have been added since.

What I found over the weekend was W.E. Hallensleben's advertisement in a few issues of The Chariton Democrat during October and November of 1867 (under the " Painting" header at left). Noting that he was "late of Burlington, Iowa," Hallensleben/Hollensleben was offering his "House, Sign and Ornamental Painting" services, including "Graining, papering, glazing, gilding &tc. done in the best manner and on short notice." His shop (and probably living quarters, too) was over the S. Stewart & Sons store on the northeast corner of the public square.

His advertisement was published for the last time on Nov. 23, a few days after he had died.

William's tombstone reads as if it might have been erected by strangers. It states that he died Nov. 18, 1867, aged "About 65 Yrs." A further line, now below ground level, states that he was a native of Germany. His surname probably is misspelled --- he most likely spelled it as advertised, "Hallensleben."

I'm guessing, and it's just a guess, that William was an itinerant craftsman, traveling to where the work was. Chariton was booming in 1867 --- the first trains had arrived from the East during July of that year and Lucas County, briefly, was at the edge of the frontier.

Then he got sick and died, perhaps among virtual strangers who buried him at county expense because they had no authority to spend any assets he may have had. If he were alone in Chariton, the Lucas County courts would have appointed an administrator to try to tack down heirs. Perhaps none were found and the decision was made to use resources he may have had to fund a nice tombstone.

That's one explanation for how someone buried in Potters Field managed to end up with what is quite a nice stone for its time.

Hollensleben/Hallensleben is a surname found elsewhere, but seems to be relatively rare. A William E. Hallensleben, for example, enlisted during December of 1863, giving his age as 44, as a private in Co. U, 1st Ohio Light Artillery. This could have been our William --- it appears that the age given on his tombstone was based upon guesswork.

Most likely we'll never know much if anything more about our William E. Hollensleben/Hallensleben --- other than what's stated on his tombstone and that his tombstone has now been repaired. For the time being, that's enough.