Attention to detail at the Lucas County Courthouse 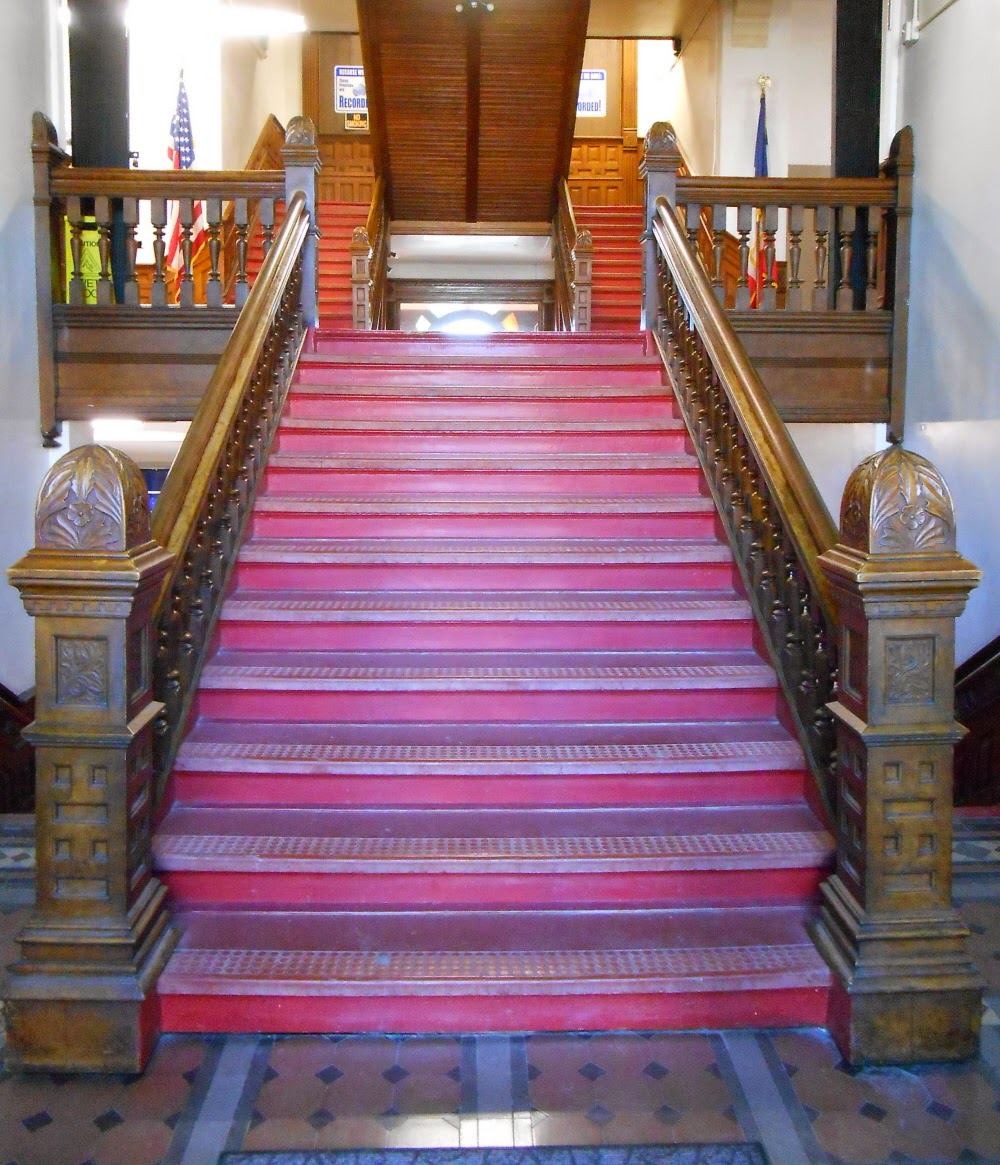 As it happens, I love the Lucas County Courthouse and always have --- although my earliest memories of it involve being led by my dad down the ground floor hallway to the men's restroom through a gauntlet of old men sitting in big chairs gossiping and spitting tobacco into strategically placed spittoons. I don't recall anything about the restroom, but I do remember the spittoons.

I'm fairly sure that most of us who live here really don't look at this wonderful old building's interior detail and appreciate just how special it is. So I took a closer look Monday afternoon.

OK, so is a little shabby here and there now and I'm not a big fan of the lowered ceilings, profusion of plastic paneling and huge air conditioning ducts --- all that were available years ago when it was decided to cool courthouse workers down during the summer months.

But how could you not love the worn woodwork of the soaring old staircases --- smoothed by 120 years of hands sliding along their rails, then grabbing elaborately turned support posts when shifting direction on a landing?

The older I get, the more I appreciate the elevator --- lobby tucked discreetly off to the side just inside the south doors --- when a trip to the county treasurer's office on the top floor is required. But the grand processional route (top) from north entrance up three flights to the courtroom floor remains the way to go.

I found this article, published in The Chariton Herald on March 1, 1894, while doing some courthouse clock research earlier this year. Although the courthouse was not dedicated until May of that year, the supervisors had informally accepted the building during late February and county offices had moved in from scattered locations around the square where they'd been located since the 1858 brick courthouse was condemned, then torn down.

The references to hand-carved elements of the woodwork caused me take a closer look on Monday.

And I did not make it into the courtroom. I believe court had been and perhaps may still have been in session. So I'll go there another day. Here's the article:

"Lucas county's new fifty thousand dollar courthouse is practically completed. There are a few minor details to arrange yet in the fitting of furniture, and finishing of basement, but this will all be completed in two or three weeks.


"The board of supervisors met in committee last Saturday morning, and finding the contract complied with, informally accepted the building, and the several county officials moved into their new home the first of the week.

"When viewing the structure from the ouside, one is impressed with the imposing and massive appearance of the exterior, and on intering is delighted with the beauty of the interior. Everything seems in such perfect harmony. The first impression is in no way changed. One feels that from the smallest particular to the completion of the whole there has been a careful supervision.

"Messrs Foster and Libbe of Des Moines were the architects. The general appearance of the building reflects great credit upon these gentlemen. There has not been a serious accident during the construction of the building. The labor has been done by home workmen except the stone work of the superstructure and the slating.

"The contract was taken by the firm of Stewart & Eikenberry for $50,000, and not a cent has been charged for extras, and not a cent discounted for failure to fill the specifications as covered by the contract, while in fact many additions have been made that have bettered the work. As an illustration, we would especially call attention to the ornaments used for decorating the interior wood-work, which, according to the specifications, were to have been pressed wood, but hand carved ornaments have been substituted. Mr. G.J. Stewart has given his personal attention to the work from first to last, and to his well known executive ability and untiring energy is largely due the completeness of finish and general excellence of work which characterize the edifice. At the risk of financial loss, he has never failed to furnish the best possible material; also to make the building solid and urable from foundation to roof.

"The work began in the fall of 1892, under the supervision of Mr. D.A. Enslow, who put in the foundation and brick work. Mr. Enslow is an experienced and practical workman, and in no place did his mechanical skill count for more than here, and long after the builders shall have been forgotten, the foundation of the Lucas county court house will stand as a monument to his skill.

"Mr. Wm. Connor of Council Bluffs superintended the stonework of the superstructure, and the plans of the architect were carefully followed as the massive and elegant appearance of the building will attest.

"Messrs. E.H. Best and C.W. Johnson had the supervision of the wood work. These gentlemen, with the assistance of other carpenters in Chariton have exhibited their skills as mechancs and demonstrated the fact that Chariton can boast of as expert workers in wood as any city of its size.

"The heating apparatus was furnished by Thomas Caton of Ottumwa, and the furniture which is in keeping with the rest of the building by Messrs. Harback & Co. of Des Moines.

"The house is brilliantly lighted throughout  by electric lights.

"On Tuesday when the Herald scribe entered the massive structure from the south entrance, by the grand staircase leading to the floor on which the offices are located, mingled feelings of pride and admiration stole over him, as he thought, have not the tax payers of Lucas county just cause to be proud of their new court house? Everything looking to the public comfort, convenient arrangement of offices for our faithful public servants, and above all absolute safety of public records, vounchers, etc., has been provided.

"As one stands within the main hall way in the center of the building and views the general construction and symmetrical effect wrought by the various artisans, he can but feel that every dollar has been judiciously expended. We found the officials all at their post, proud as a boy in his first pair of pants, and busy with the current business of their office and the attendant work of straightening around after moving, but each found time to exchange friendly greeting and congratulations.

"We rejoice that we live in so rich and grand a county as Lucas, and when the roads become passable, hope to greet every farmer and citizen of the county, with the wife and babies, at the county seat to help dedicate the building of which we are all justly proud. It will be a gala day for Lucas county then. Let's arrange to be there. 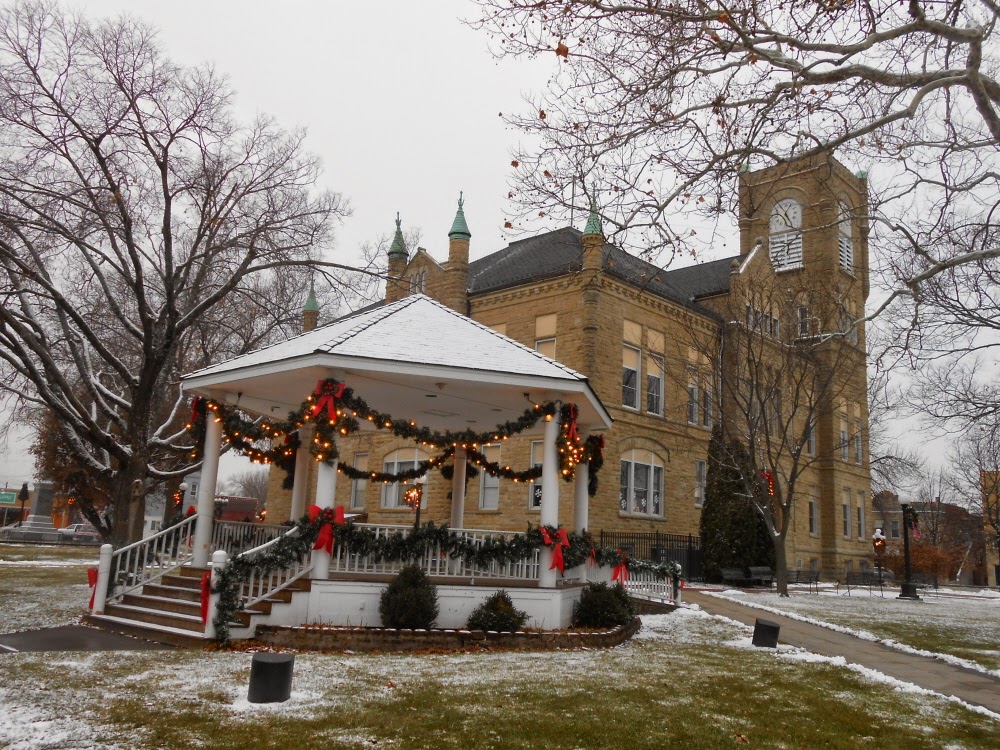 They sure don't build 'em like they used to! There are beautiful details in the Lucas County Courthouse, and your camera captured them beautifully.