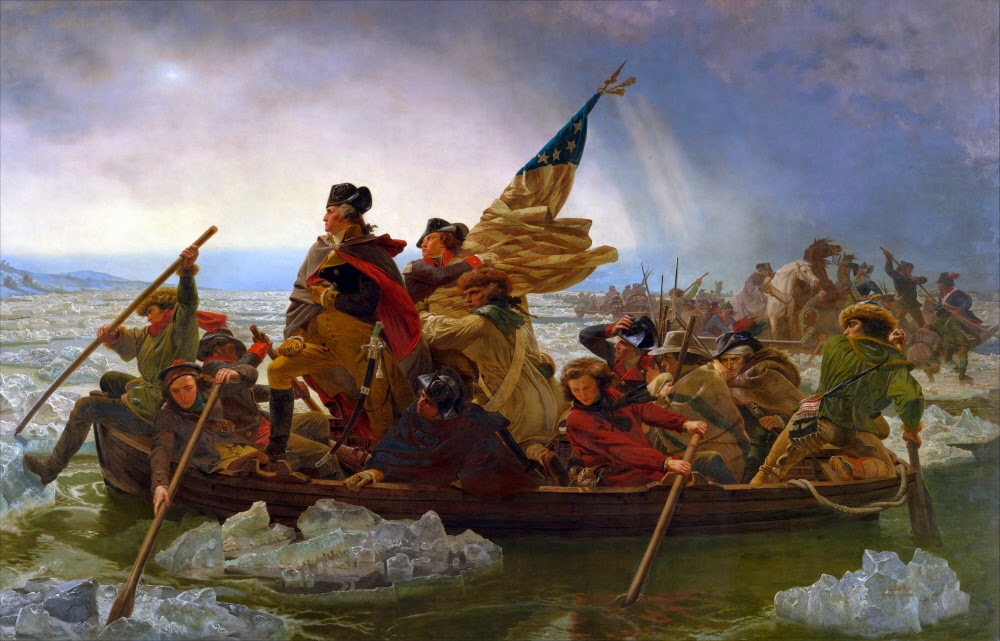 George Washington's principal link with Christmas, a staple of history classes at many levels, involves crossing the Delaware River with troops by boat during the night of Dec. 25-26, 1776, to surprise (and defeat) Hessian troops quartered in Trenton, N.J.

During peaceful times, however, Washington and his family observed Christmas with family and friends in a more traditional manner, then --- according to an article I read earlier this week --- was likely to join fellow Masons on Dec. 27 to celebrate St. John (the Apostle) Day, long a midwinter festival of the fraternal organization.

Traditionally, Freemasonry observes two St. John days, John the Apostle on Dec. 27 and John the Baptist on June 24, holding major celebrations and installing officers on one or the other --- and both were lavishly observed in Chariton, too.

Although no one is quite sure why, since St. Thomas is the patron of architects and builders. It may have had more to do with the fact that the two St. John days conform roughly to the winter and summer solstices, neatly dividing the year into halves.

There's a good deal of debate about Washington's religious views, principally because he rarely wrote or talked about the subject. He was by default an Anglican, the official state church of Virginia during colonial days, then Episcopalian after the Revolution; and may have shared the deist views of other intellectual founding fathers like Jefferson. Or not.

But there's no doubt that Washington was a Mason in good standing and I'm sitting here right now looking up at a large portrait of the Father of our Country dressed in full Masonic regalia that it seemed like a good idea to acquire for purely decorative purposes many years ago when a north Iowa lodge went out of business.

Chariton's Lodge, No. 63, was formed in 1853, chartered during 1855 and in its time had hundreds of members. It would be difficult to overstate the importance of fraternal organizations to Chariton during the late 19th and first half of the 20th century. The I.O.O. F and Knights of Pythias lodges also had hundreds of members and substantial meeting places.

I found this description of the Dec. 27, 1873, St. John Day observance in Chariton while looking through old issues of The Chariton Patriot last week, looking for Christmas-related material. It was published on Dec. 31.

The Masons of this place celebrated St. John's Day at Mallory's Hall last Saturday evening. It seemed a regular outpouring of the fraternity. In the gaily lighted halls, childhood, youth, old age and beauty mingled in one common brotherhood, each with the other vieing to draw from the occasion all the pleasure there was in it. With the eating, and chatting, and promenading and music and dancing, the hours passed swiftly by, and when the home hour came it was discovered that the evening had been delightfully spent. Messrs. Reusch, Soper, Hayden, Stackhouse, and others are entitled to much credit for the management of the affair.

The bigger celebration during that era, however, was held at midsummer, on the feast day of St. John the Baptist. Here's a report of the 1870 celebration from The Democrat of  June 28:

The Masons of this place, and those from a number of neighboring Lodges, united in the observance of St. John's Day, the anniversary of their patron Saint, by a celebration and public installation of the officers elect to Chariton Lodge. The exercises were held in Baker's grove, a short distance east of town, and a large crowd of people were present. An address was delivered by Rev. Mr. Cory, the occasion being also enlivened by music and made more agreeable by a sumptuous dinner served up by the Masons. Delegations from several other lodges were present, including nearly 150 persons from Osceola. The affair passed off in a most satisfactory manner, all who were present enjoying themselves much. After the exercises in the grove were over, they returned to the city and everything that could be done to add to the pleasure of the visitors. Osceola deserves great credit for bringing such a good delegation, and a more genteel, intelligent looking party of ladies and gentlemen is not often seen in this backwoods country. They brought with them the Osceola Brass Band, who furnished such music as we do not often hear in Chariton. We have pride in our own band, but cannot but regret that they are not equal in proficiency to that from Osceola. The Osceola Baseball club also came along with them, and a portion of a game was played between them and our club, which not being completed, was decided as a draw game, though the Chariton club was ahead on the score. Altogether the day was one of unusual enjoyment and all who participated in its pleasures will gladly remember it and wish for the return of "Midsummer Day."

By the 1890s, installation of officers had shifted to late December and there had been a number of local Freemasonry developments. A chapter of the Eastern Star (Engle Chapter No. 63) and a commandery of the Knights Templar (Immanuel Commandery No. 50) had been organized. Eastern Star was for women and Knights Templar, for Masons who wished to be identified specifically as Christian (general Masonic membership required only belief in a supreme being).

In addition, the Masons had joined with the somewhat larger I.O.O.F. Lodge to build the Union Block on the northwest corner of the square where both lodges had third-floor headquarters. The I.O.O.F. hall was larger, so the Masons borrowed it for their Dec. 27, 1894, celebration during which the following officers were installed:

By St. John's Day, 1905, the Masons had bought out the I.O.O.F. lodge, which had moved to new quarters on the north side of the square. The lodge rooms had been enlarged and remodeled and that fact was celebrated on Dec. 27, as reported as follows in The Patriot of Dec. 28:

Chariton Lodge No. 63 A.F.&A.M. celebrated St. John's Day Wednesday evening by opening their new lodge room in the Masonic Temple and giving themselves and their ladies a banquet. The dinner was served in the old lodge room, there being about a 150 people at the tables. It was a veritable feast of good things and was prepared by the ladies of the Eastern Star, to whom a vote of appreciation was unanimously tendered.

Following the banquet there was a social hour in the main lodge room. Then was held the public installation of the officers-elect with all the impressive ceremony of such an occasion. The Chariton orchestra furnished the music for the event. There were a number visitors from out of town.

Chariton Masons now have a home to be proud of. The large new lodge room has been elegantly furnished and decorated, and is lighted by electricty. There are large property and ante rooms. The lodge is well prepared to properly perform the ceremonies of admission to the degrees of Masonry, and the organization is to be congratulated upon its possession of such splended quarters.