A new year drama --- and the Methodists 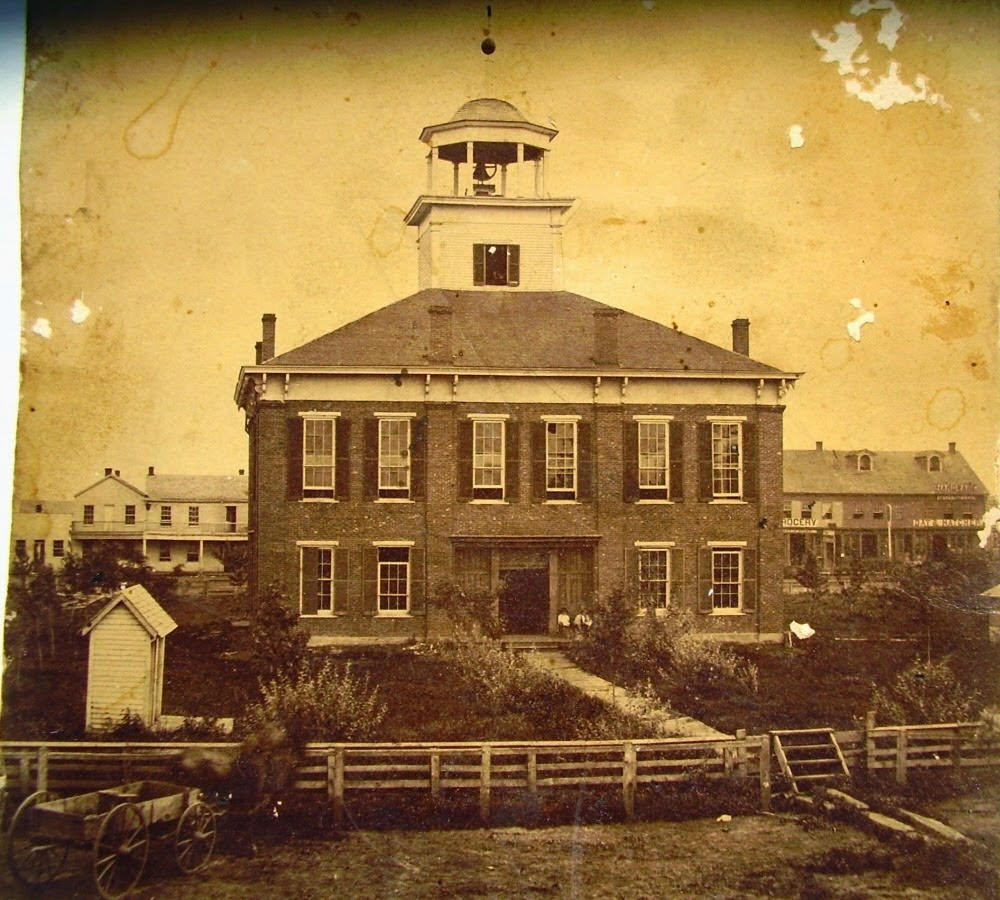 I've written before about the rambunctious John V. Faith, founder, publisher and editor of The Chariton Democrat during the years 1867-1871. During the latter year he succeeded, more or less, in running himself out of town in part because he lacked a sense of proportion and the ability to choose his battles wisely.

As 1869 wound down and 1870 dawned, Faith butted heads with Chariton's Methodists, then as now among the more influential of the city's religious. At that time, too, Methodists were the leaders in campaigns to elevate the level of public morality, opposing such wickedness as strong drink, dancing, the theater, card playing and more.

The event that led to this new year skirmish began to develop when a group of Chariton young people decided to stage a dramatic production on New Year's Eve in the courtroom of the 1858 courthouse (above). The proceeds were to be divided among the Sunday schools of the various churches then operating in town.

The courtroom, which occupied half the second floor of the courthouse, was Chariton's only public venue other than churches from the time the building was completed until 1872, when the Mallory Opera Block rose on the northwest corner of the square.

The Chariton Democrat reported on the upcoming event as follows in its edition of Dec. 28, 1869, under a headline that read, "The Drunkard."

The preparations are completed for the entertainment at the Court House on New Year's Eve, and a good time may safely be anticipated. The young ladies and gentlemen have made themselves familiar with their parts, good scenery has been gotten up and everything seems to be in readiness. We trust our citizens will give the young folks a good turn out and reward them for the patience with which they have gone through with the preparations. The "Drunkard," one of the best and most popular of the standard moral dramas, will be rendered, and the proceeds, over the expenses, are to be donated to charitable purposes. We believe the exhibition will call out a good crowd. The tickets of admission will be fifty cents a piece, and they can be procured at Maple's Book Store and at the Post Office.Come out and see the stage-struck Charitonians.

Elsewhere in The Democrat of that date, however, was the following public notice:

At a meeting of the Official Board of the M.E. Church held Dec. 27th, the following was unanimously adopted: Resolved, as regards receiving money from theatres, that we, as a church, touch not, handle not, and receive not the unclean thing.

That, in turn, resulted in the following editorial, headlined "The 'Unclean Thing' " ---

It may seem a little remarkable, but it is nevertheless true, that the M.E. Church here in Chariton has stubbornly set its face against the "unclean thing," otherwise "filthy lucre," as appears from a resolution published elsewhere in this paper, in that it refuses to receive any portion of the monied proceeds to accrue from the dramatic entertainment to be given by a number of the young people of Chariton, on next Friday evening. The circumstances must be mysterious when a Methodist church will refuse to receive money, no matter from what source; and as nearly all the better class of young people in Chariton are engaged for the contemplated entertainment, we are at a loss to conceive wherein the official board of the church finds reason to stigmatize them as disreputable or immoral, as is the inevitable inference from the resolution. It is vaguely suggested that if the young folks had proposed to donate the entire proceeds to the Methodist church that kind of a resolution would never have been thought of. They do not state why money derived from such sources should be despised more than that accruing from lotteries and other swindles so common at church festivals where children as well as adults are made the victims of ten-cent frauds and encouraged to spend their last cent, and with no intention of giving an equal return for the money.

The Methodists, it would appear, did not respond in print; the publicity perhaps roused additional interest in the production; and that it was a success. John V. Faith, however, could not resist a few additional digs in his report of the event, published in The Democrat of Jan. 4, 1870:

The entertainments given by the young folks at the Court House on Friday and Saturday evenings were successful in all respects. The court room was literally crowded both evenings, and everything passed off in a most satisfactory manner, notwithstanding the desperate attempt on the part of the Official Board of the Methodist Church to put the stamp of disgrace upon all those who were engaged in it, and all who should encourage it by their presence. We were pleased, however, to note the presence of a large number of the more intelligent and less bigoted members of that church, and we cannot believe that the resolution which the aforesaid official board threw upon the "wings of the wind" reflects the opinion of even a considerable minority of the membership of the church, and we hope the lesson of the past week will prove a profitable one to them for all time to come. We venture the opinion that not one member of the official board, who voted for the resolution, was ever inside of a theatre, unless perhaps, some low down varieties concern, and we think that the less they have to say about similar affairs in the future the better it will be for them.

Wow, what a turkey shoot!

And times did change as the Methodist Church became the membership most engaged in theater and musical expressions in the community. From the times of the Aeolian Singers presentations to current participations in theatrical and youth activities, the Methodist members are leaders with other denominations of present day community activities. Must have just been the times of the 1800's.