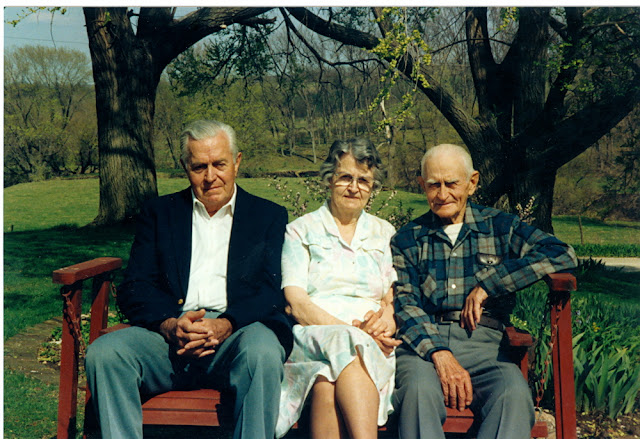 I'll be having lunch with some other orphans today and we'll probably talk a little about our mothers, since it is Mothers Day after all and we all had one --- at the least.

This is mine, sandwiched between her younger and older brothers, Richard and Joe. The photo was taken about this time of year on the farm where I grew up south of Russell.

Sometimes character can be assessed as much on the basis of what isn't remembered as what is. For example, I do not remember my mother ever raising her voice in anger or striking anyone or any thing (including me). She did kill snakes that invaded her garden, however, and cold-bloodedly beheaded chickens bound for the cooking pot.

Nor do I remember her ever demeaning anyone individually or collectively on any basis, including race, religion, politics and sexual orientation.

She never complained so far as I can remember --- ever. I cannot imagine how she managed that.

I don't recall that she ever quoted a Bible verse or used that weighty volume as a basis to chastise or proselytize --- although she left behind a worn out King James version. She merely lived relevant passages.

My mother was brave, honorable, gentle, smart, patient and unwaveringly kind --- a good cook, a master gardener and highly skilled with needle and thread. And she always voted Democrat. Blessed be.
Posted by Frank D. Myers at 5:15 AM