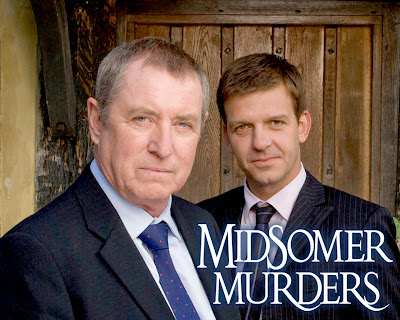 Although I gave up for Lent giving up for Lent as a general practice some years ago, I am thinking this year of attempting as spiritual exercise to harness and then rein in my passion for Midsomer Murders.
This British television series has been around since 1997 and seems still to be going strong. I have bought many boxed episode DVD sets, borrowed others and now have found myself during long winter evenings scouting out on YouTube pirated episodes I may have missed, then reclining on the bed in this room where I work and watching them across the way on small-screen in a near vegetative state. This is beginning to seem  obsessive.
Midsomer Murders is set in an imaginary county named Midsomer somewhere in the west of England, I believe, and the formula generally is the same --- one murder leads to another murder (or murders) before the whole thing is sorted out in a light-hearted sort of way by Detective Chief Inspector Tom Barnaby (John Nettles) and his trusty assistant, currently Detective Sergeant Ben Jones (Jason Hughes). That's Tom and Ben in the photograph.
Vital insights often are offered by Barnaby's long-suffering wife, Joyce (Jane Wymark). Other regular characters are the Barnabys' daughter, Cully, who seems to have no useful occupation but is decorative; and Pathologist George Bullard.
The acting here is not necessarily remarkable, but wonderfully entertaining. And the bonus, a succession of actors known in Britain but not necessarily here. We would call them "character" actors in the United States because as a rule they're neither excessive young nor excessive pretty, but over there, they seem just to be considered "actors."

Among my favorites over the years have been the late and lamented Elizabeth Spriggs (at left), who as Iris Rainbird died horribly with her dastardly son, Dennis (a local undertaker), in one episode, but emerged triumphantly alive as other characters in at least two more episodes.
I'm having some difficulty putting my finger on exactly why Midsomer Murders is so entertaining although it may have something to do with the fact it's almost impossible to take it seriously although the presentation is by no means satirical.
I stopped watching American television at a time when the focus of dramas had shifted to extremely gritty sex, usually abusive, and/or a preoccupation with graphic depicions of autopsies. I failed to find either abusive sex or bloated bodies being cut apart before my eyes entertaining. The top comedy at that time, and sill until quite recently, was entitled "Two and a Half Men" and involved two sexual predators attaining orgasim with some regularity with a variety of women in the presence of an adolescent. All of these programs seemed to take themselves seriously --- to a grotesque degree.
Midsomer Murders on the other hand rarely seems to take itself seriously, is considerably more restrained and a heck of a lot funnier at times --- although there is a good deal of adultery going around in an understated sort of way to provide motives for some of  those muders. And the murders occasionally are depicted in a mildy graphic sort of way (especially memorable, the dastardly motorcyclist beheaded by a wire strung between two trees whose decapitated and helmeted top bounced off the Barnaby windshield before rolling down the highway).
But even an episode described as "a hated property developer is beheaded at a funfair" for some reason is not nightmare-inducing.
I really should be doing more productive things of an evening, however, and perhaps Lent is a good time to cut back. We'll see.
+++
Great rejoicing here this morning because full-bodied Skippy super-chunk peanut butter is not among the Skippy products recalled in the latest salmonella scare (only "lite" varieties were involved).
In addition to Midsomer Murders, I am passionate about peanut butter cookies, made with super-chunk Skippy, and also some mornings about oatmeal in which a large spoonful of Skippy super-chunk and a smaller spoonful of brown sugar have been dissolved.
Now I can go have breakfast with some assurance I won't be rollong on the floor holding my stomach shortly after.
Posted by Frank D. Myers at 6:49 AM

I haven't seen a "Midsomer" listing on TV for a long, long time. Are new episodes being produced? I'm with you--the British mysteries are great. Midsomer, Inspector Morse--even Miss Marple, although she's been played by so many actresses she's a little hard to identify with.

Have you tried Netflix for your Midsomer-mania? The plan I have is only $10 a month and provides one DVD at a time. However, many titles are available for instant play on the computer.

I'm also very fond of the Britcom "Keeping Up Appearances." Its standing gags, such as Hyacinth falling into the hedge after the dog barks at her, that are funny week after week like Fibber McGee's closet used to be.

On an unrelated note, you were prophetic in your January post about doves. The Kill All Doves bill or whatever they named it made it through funnel week.

Hi Wanda. Yes, Midsomer still is being produced but not necessarily broadcast widely here on this side of the Atlantic. I may have to try Netflix one of these days.

I think I have on DVD all of the Miss Marple episodes starring the late Joan Hickson (1984-1992), who was the perfect Marple --- but have trouble with most who have portrayed her since. Hickson established a mark no one's been able to rise to --- and she was in her 80s during much of her production run.

I like "Keeping Up Appearances," too, but you're right --- don't remember Fibber McGee's closet.

Ed, I'm not surprised about the dove bill. Perhaps bluejays will be next -- they're about the same size.

Joan Hickson was my favorite Miss Marple. I'll have to check Netflix for that series.