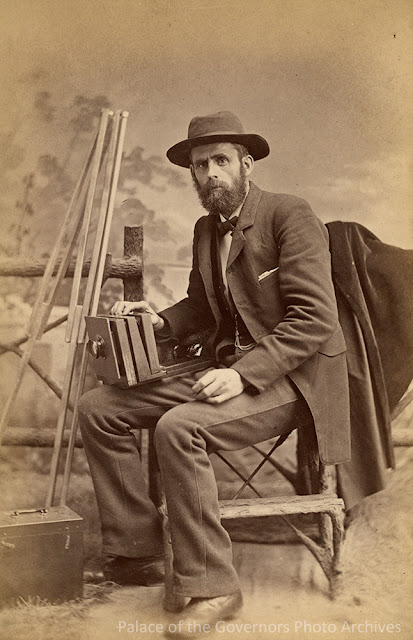 This modest exploration of the life and times of photographer Henry T. Hiester (1845-1895) ended temporarily last week after what arguably was his most productive decade, ca. 1870 until 1878 or so, spent in New Mexico and northeast Arizona. His remarkable views, many of them in stereoscope card form, of native people, buildings of the Southwest and the desert landscape have stood the test of time and are widely acclaimed (and collected) today.

I left Henry last time in 1880, three years short of his arrival in Chariton, after he had returned to the Midwest from New Mexico and was living with his father and stepmother on Farm Ridge in LaSalle County, Illinois. His occupation was given as "photographer" on that 1880 census form and it seems likely that he continued to practice his profession in Illinois and elsewhere 1880-1883.

As a rule, Henry did not stick around one place very long. He was unattached and traveled light. His usual practice seems to have been to alight in a place that interested him, establish a studio, use it as a home base until he lost interest in the photo opportunities of the vicinity or a better opportunity presented itself, then move along.

Henry was 39 when he arrived in Chariton and the self-portrait at left was taken in his Chariton studio. It is part of the Henry T. Hiester/Melander Brothers collection, Palace of the Governors Photo Archive, Santa Fe. Most likely it was among items donated by Henry's nephew, Paul Hiester, during 1974. An interior photo, most likely of Henry's studio, also is part of that collection.

It's not clear why Henry decided to relocate in Chariton during the spring of 1884, but we do know that his uncle, the Rev. Henry T. Hiester Sr., vicar of St. Andrew's Episcopal Church, Farm Ridge, had spent a weekend in Chariton with his cousin, Dr. Charles Fitch, during June of 1883. St. Andrew's Church, Chariton, extended an invitation to the visiting vicar to preach that Sunday and he obliged. That family connection may have been among the reasons.

By April of 1884, Henry had moved to Chariton and hung out his shingle above a furniture store on what now is North Main Street (then Harrison Street), a half block north of the northwest corner of the square. The earliest of his advertisements that I've found appeared on Page 1 of The Patriot of  April 16, 1884:

HIESTER'S
Photograph Rooms. Remember the place, Harrison St., north of First National Bank, on the way to the Depot. Using the latest and best Processes, with good and appropriate instruments, and a ripe experience, we Guarantee Satisfaction. Call in and see our pictures of the Aztec villages of Arizona, Navajo Blanket weavers, etc., as well as portraits of your neighbors. We can make good pictures of your homes, interior as well as exterior. Visitors always welcome. H. T. Hiester.

Later on, during 1886, Henry would advertise that he had 17 years of experience as a photographer. This suggests that he had begun working as a professional ca. 1869, just a couple of years before he headed for Santa Fe.

Henry was fairly effective at self-promotion and during May of 1884, one of his creations caught the eye of The Patriot editor who reported as follows in his edition of the 16th: "Our artist friend Mr. Hiester has capped the climax in the production of a charcoal sketch, 'Phogtographing the Baby,' which adorns his show window. It is certainly a study. The urchin is perched upon a chair, while a string of relatives extends all the way from the baby to the camera. There is the mother, the aunt, the grandmother, the mother-in-law, the father, the uncle, the father-in-law, and the grandfather, each trying to engage the baby's attention while the artist is in despair. Stop and look at the picture and at least you will laugh."

On Oct. 22, 1884, The Democrat-Leader reported, "Mr. Hiester, the artist, has made some splendid views lately. those taken on the railroad track and showing the position of the engine and cars at the wreck near the jail are very fine. but then he is a fine artist as all can attest who have tested his skill."

The reference is to a locomotive that had derailed a week earlier near the jail, demolishing the tender,  taking several cars with it, and spilling grain on the jailhouse lot.

Several months later, when the 1885 state census of Lucas County was taken. Henry was sharing his home with his sister, Anna, who seems to have served as his housekeeper both in Iowa and then later in Texas. Staying with the pair was their youngest half-brother, Barent U. Hiester, then 24. Barent returned to Illinois to farm after his stay in Iowa. Paul Hiester, who many years later would donate his uncle's collection to the New Mexico Historical Society, was his son.

Henry came up with several gimmicks during his time in Chariton. He offered to photograph small children free, for example, and provide the proud parents with one of the resulting images. That was the hook. But who could stop with just one image of a precious child? Copies for grandparents, aunts, uncles and others were charged for at full price.

During July of 1886, Henry extended the same offer to old settlers, making the following offer in The Democrat of July 15 as well as in Chariton's other weeklies:


"Hiester, Chariton's photographer, who several times has given the babies a benefit, now makes the following liberal offer to the old settlers of Lucas and adjoining counties: Between the 15th of July and the 15th of August he will make and give to each person over 65 years of age who will give him a sitting, a fine cabinet portrait, free of charge. Don't be backward, he means it, and will be glad to see and photograph you all."

By now, however, Henry had developed a sideline in partnership with a man named George Estess --- manufacturing photographic plates for both himself and for other photographers. Here's a report on the operation from The Herald of May 15, 1886:

"There is one establishment in Chariton that but few of our readers know anything about. We refer to the Dry Plate factory of Hiester & Estess which is located on Harrison street. This firm have gone to work in a quiet and unostentatious manner, put in all their appliances, and are today supplying a large number of photographers with their plates. In looking through the factory one has to have pretty sharp eyes to see anything. The rooms are all so completely darkened that not a single ray of light is ever permitted to enter. The light used is red and orange. A single ray of white light would destroy the plates. We did not quite learn the trade, but from Mr. Estess we learned that the coating put on the plates is an emulsion of silver combined with other chemicals. The plates are flooded with the liquid, and then carefully dried, after which they are wrapped in dark colored paper, sealed up, and then enclosed in a double paper box, when then may be packed for shipping. The plates are very sensitive and are the kind used for taking instantaneous pictures. They are so sensitive that the twentieth part of a second is sufficient to get a perfect negative. To write up a description of the factory and convey anything like a full idea of the business would take columns. But to those who are curious we would say that a visit to the rooms would well repay you, and we feel confident that either of the proprietors would take pleasure in showing a visitor the secrets of those darkened rooms."

At some point during the next couple of months, the manufacturing operation was moved to Fort Worth, Texas.

Remember that Henry had advertised his old-settler special as effective from July 15 to August 15, so it seems likely that he remained in Chariton during that time.

But The Democrat reported in its edition of July 15 that "Mr. Hiester of this place has formed a partnership with Mr. George Estess and the firm has gone into the exclusive manufacture of Gelatine Bromide Dry Plates for Photographer's use at Ft. Worth, Texas. We wish the gentlemen great success in their undertaking."

The gelatin dry plate process still, in 1886, was relatively new technology.  Developed in England in 1871 it was by 1886, however, the standard and cameras manufactured during that decade almost universally were designed to use it. So there were opportunities for entrepreneurs like Hiester and Estess.

Henry may have remained in Chariton until mid-August, but on Sept. 2, 1886, The Democrat reported that "William Branch is now running the Photograph gallery formerly owned by Mr. H.T. Hiester, and with the assistance of a first-class operator from Illinois, is doing excellent work in the picture line."

The new proprietor of the studio north of the square was the Rev. William Branch, pastor of Chariton's First Christian Church, who apparently was in the midst of some sort of career/faith crisis that long-ago late summer. Most likely he had purchased some of Henry's equipment and negatives seem to have been part of the deal, too. Branch advertised, for a time, that copies of images taken by Hiester still were available.

The notice in The Democrat's Sept. 2 edition reads, "Old folks, young folks, babies and all whose photographs have been taken by Mr. Hiester can get duplicates of the same by calling on Wm. Branch, who now owns the gallery."

Branch continued to operate the old Hiester gallery, with an assistant, as well as to preach throughout 1887, although published reports suggest that he was looking for better opportunities --- in the photography rather than the preaching field. He made trips to both Oskaloosa at La Crosse, Wisconsin, to look at galleries during the year

In January of 1888, Branch resigned his pastorate and headed for Oskaloosa. He sold the gallery in Chariton to a young man named Lewis A. Shular.

Meanwhile down in Texas, Henry was beginning what would be the final phase of his career.