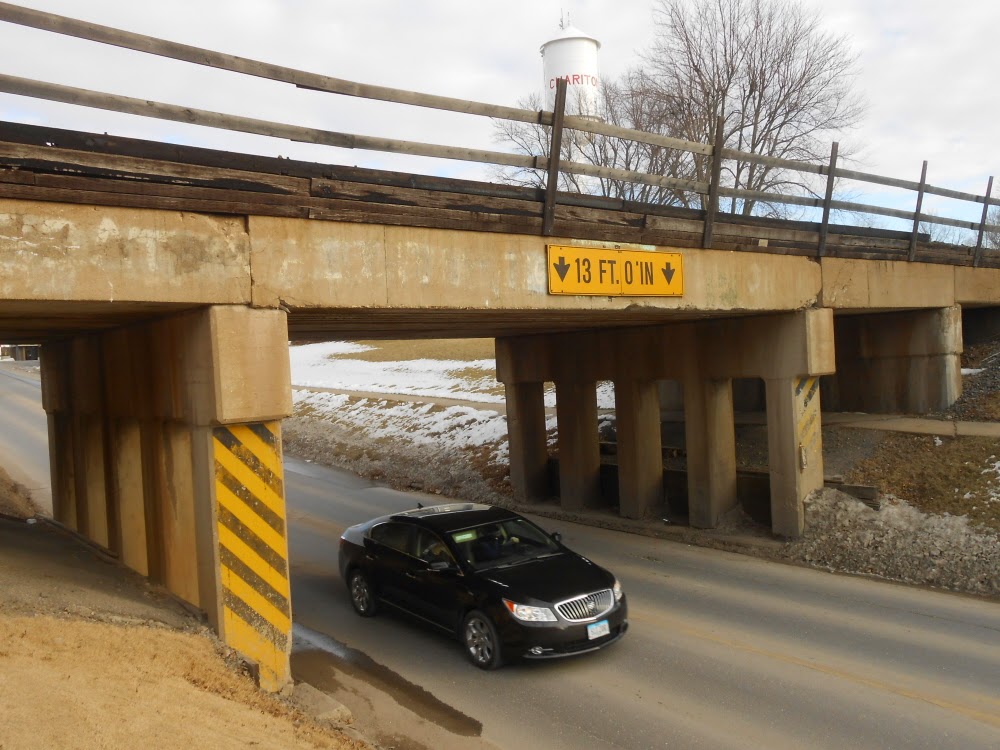 Our forebears knew this ugly sucker as the Court Avenue Subway, though it's neither a sandwich nor an underground transportation system. We call it an underpass these days and it has four mates in Chariton, allowing traffic to flow under both the east-west Burlington Northern & Santa Fe and the north-south Union Pacific rail lines.

But this is the devilish one --- waiting like a giant concrete cat to pounce on the unwary trucker hauling a giant semi-trailer who either ignores or misses signs down the road, glances up at the clearance notice, "13 feet and NO inches," then says to himself or herself, "aw shucks, I can make it." Alas, not so.

The Burlington Northern & Santa Fe tracks are Iowa's busiest and best maintained (although you'd never know it, looking at this scruffy though sturdy bridge) and locomotives hauling thousands of rail cars loaded with everything from coal to Amtrak passengers cross over here daily without incident.

The big rig driver who tries to pass under, however, will end up with his trailer hopelessly lodged, sometimes with its back broken. The police will come, then the big equipment and finally Court Avenue will open again after everything has been hauled, or driven, away.

It should be noted that most drivers, perhaps led astray by their GPS systems into thinking Court Avenue (also called Business 34) might be a good shortcut linking State Highway 14 and U.S. Highway 34, realize their error as soon as they see the underpass, then turn off onto a side street or, if they've gone too far, back up. I can't count the times I've followed a semi up or down Court trying to communicate telepathically with the driver --- "No. Noooo. Don't do it!" Most don't.

The problem here seems not actually to be the underpass, but the fact Court rises sharply to climb in one block to the southwest corner of the square as soon as you drive east under the tracks. This abrupt shift in elevation changes the whole equation and is the real trailer-killer. And there's no good engineering way to correct it.

The east-west rail line through Chariton has followed the same route at the same grade through town since 1867, entering from the southeast, then turning northwest to form a shallow "s" as tracks pass the square and approach the depot and rail yards to the northwest.

Until 1928, when the subway was built, the rail crossing west of the southwest corner of the square was at grade. Court Avenue descended gradually in the length of a block, crossed the tracks, then dropped away sharply into the old ravine the street still follows west out of town. The area where the big-box stores, fast-food places and various offices now are located on Court Avenue West was low, kind of marshy and not considered especially important. Chariton's main west entrance-exit was at the northwest corner of town.

The grade crossing was not especially safe, however, because of the drop to the west --- so Chariton city leaders began pressuring the C.B.&Q Railroad to install what then was called a subway soon after World War I ended.

Lobbying intensified when what now is U.S. 34 was designated Iowa Primary Road No. 8, linking Burlington and Council Bluffs, with Court Avenue --- straight in from the west, then across the south side of the square --- as the main route through town.

The city and the railroad could never agree, however, on who should pay for what --- so the project stalled again and again.

In 1926, Iowa Primary Road No. 8 was designated U.S. 34, part of an interstate highway system, and federal funds became available to pave it. Imagine that, a concrete roadway all across southern Iowa.

That grade crossing just west of the square now had to be rerouted under the tracks, one way or another, and negotiations accelerated. First the C.B.&Q. wanted the city of Chariton to remove the dirt, then it wanted other rail crossings in town closed if the subway were built. And so it went during 1926 and 1927.

Finally, with the Iowa Highway Commission and others involved in the negotiations, an agreement was reached about March 1, 1928. This literally was the 11th hour, since paving through Lucas County was scheduled to begin that spring. Because of the underpass delay, the paving project slated to begin at the "Tharp corner" (just west of the current airport) and proceed east to the Monroe County line was reversed.

Although the precise funding formula was not immediately released, the state (using a mix of its own and federal funds) and the railroad split the cost of the subway project, which carried an estimated cost of $50,000. The railroad built the overpass bridge; the state paved Court Avenue from west city limits to the square.

Excavating for the project commenced during the first week of April. This was a complicated project because as excavation progressed temporary bridging had to be put into place to carry rails across Court Avenue until the permanent bridge could be put into place.

Work on the permanent bridge began during early June, with a projected August completion date. There were delays, of course, but on Nov. 9, 1928, The Herald-Patriot was able to report that the subway was virtually complete --- except for rerouting tracks over the permanent bridge, removing the temporary bridging --- and paving. A contract for the remaining 75 feet of concrete roadway had just been awarded to Knutson Bros. of Chariton.

So by Christmas, 1928, trains were rolling over Court Avenue and motor traffic was flowing smoothly under it --- except for the occasional unfortunate semi-trailer.

There's a train rolling by a block and a half east as I write. Hopefully, there won't be a semi-trailer lodged in the "subway" when I head for church a little later.

When they see the sign they turn on 8th, drive over the corner of our yard getting back to 14.