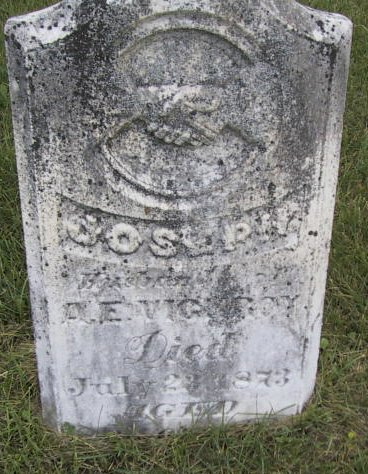 Photographs of Joseph Vickroy's tombstone (added by "FLH") and Eliza H. Vickroy's tombstone (added by "Alice"), both in the Newbern Cemetery, were taken from the Find A Grave Web site.
This is the eleventh in a series of biographical sketches and articles written or edited by Thomas M. Dunshee between 1903, when he began collecting the material, and 1910, when he finished entering the sketches in a small blue "tablet" notebook now in the Lucas County Historical Society collection. The subjects all were fellow pioneers in the Newbern neighborhood of English Township, Lucas County. This is the shortest, and most incomplete, of the Dunshee biographies.
JOSEPH VICKROY
By J. Westley Vickroy
January 1904
Joseph Vickroy was born in Bedford County, Pennsylvania, the 3rd day of January 1802 of English descent; was married to Harriet Longsworth of Barltimore County, Pennsylvania, the 10th of March 1822. (She) was born in Bedford Co., Penn., the 11th Jan 1804, and died the 4th of April 1835. They had five children by this marriage, Caroline, Louise, Lewis, Margaret and William.
Joseph Vickroy was again marred on the 15th of September 1835 to Ann Eliza Wiley of Bedford County, Pennsylvania. To this union ten children were born, seven of whom are still living.
Mr. Vickroy emigrated to Iowa April 20th 1856 and settled in the little town of Newbern, Marion Co. The next year, 1857, they moved onto land in Section 8 of English Township, purchased of M. Haskins. This farm consisted of 120 acres of prairie that had been purchased of the government by Isaac Kinsey. This place had a few acres broke out and a log cabin.
Newbern at this time had about ten houses. Mosher and Wiley were merchants, also Bonebrake and Newman kept a store of general merchandise. There was a steam flouring mill built just south of Newbern across the road in Lucas County, owned by Nathan Davis, Frank Worley & Co. The mill was burned down in 1857 and not rebuilt.
Mr. 'Vickroy lived on his farm until his death, which occurred July23, 1873. Mrs. Vickroy died January 25th 1895. 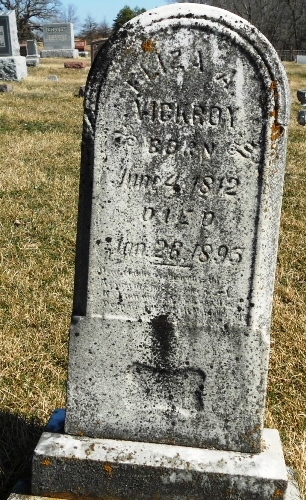